Snapchat has announced a range of coming features at its 2020 Snap Partner Summit, including advances in AR, new place listings in Snap Map, original programming, an action bar... Basically Snap has announced a heap of stuff.

Here's an overview of all the key details.

First off, Snapchat's bringing a range of new AR features to its app in order to tap into the rising popularity of its digital experience tools.

Indeed, Snap has previously reported that its AR tools were seeing increased usage amid the COVID-19 lockdowns, and that 170 million figure is significantly higher than the 55.3 million daily active Lens users it reported back in 2017.

To capitalize on this, Snapchat is adding Local lenses, which will enable users to engage with a "persistent, shared AR world built right on top of your neighborhood'.

Essentially, you, and anybody else, will be able to virtually paint and edit certain buildings or landmarks, and those actions will remain visible to others within the app.

Facebook experimented with similar back in 2017 with its SLAM virtual art installation project. Snapchat has also experimented with digital art displays, but this is the first time that it will offer an interactive option along the same lines.

Snapchat already has scan tools in partnership with Shazam (for music) and Amazon (for products), but now, it's looking to take that capacity even further, partnering with a range of providers to facilitate expanded scan options, including:

In addition to this, Snapchat's also adding a new Voice Scan option, which will provide Lens results based on voice commands. 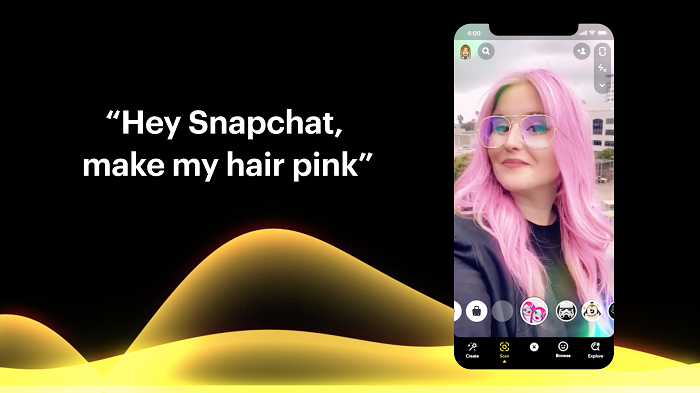 Snapchat's also rolling out a new SnapML process, which will enable developers to bring their own machine learning models directly into Lens Studio to create advanced Lens experiences.

And via its SnapKit developer platform, Snapchat's adding Dynamic Lenses, which will enable developers to add real-time information from their apps into Snapchat lenses.

"Beginning today, you can share a custom Lens on Snapchat to invite your friends to your virtual group hangs on Houseparty."

Also via its SnapKit platform, which it first launched back in 2018, Snapchat's launching Snap Minis "a new way for developers to bring their services inside Snapchat and empower new, social experiences".

As you can see here, Snap Minis are essentially micro versions of full apps, built within Snapchat. That gives app developers the opportunity to reach Snap's audience with their tools, while also adding to new functionality to Snap. The feature is part of Snapchat's larger move towards opening up its platform to outside contributions, which could help it build a larger eco-system to better compete with Facebook and other social apps.

Snapchat's also developing its new integrations with other apps, enabling people to use Snapchat functions in tools like Squad and Triller, while it's also developing Bitmoji for games, which will add more personalization to the in-app gaming experience.

On another front, Snapchat has also officially announced its new function bar, which was first spotted in testing back in February. 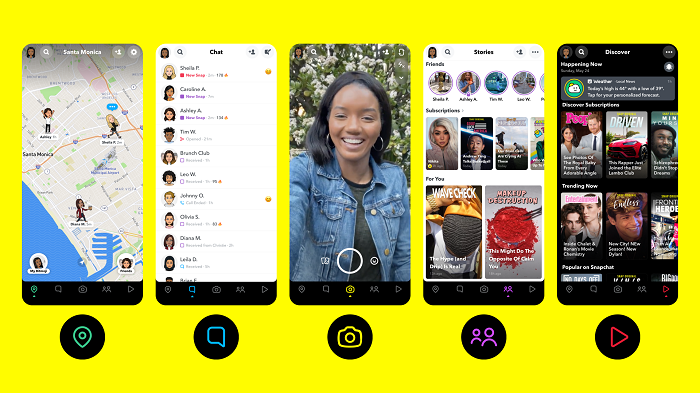 The function bar is designed to simplify in-app navigation, which could make Snapchat easier for newcomers to understand and use. In the past, Snap has actually, seemingly, tried not to make its app overly easy to navigate, as a means to keep out older audiences, but now, as it looks to expand its user base, the new function options will make it easier to tap across to each element within the app.

Snapchat's also adding a new 'Topics' option for Stories, which will enable users to contribute to broader conversations - kind of like hashtags, but facilitated by stickers instead. 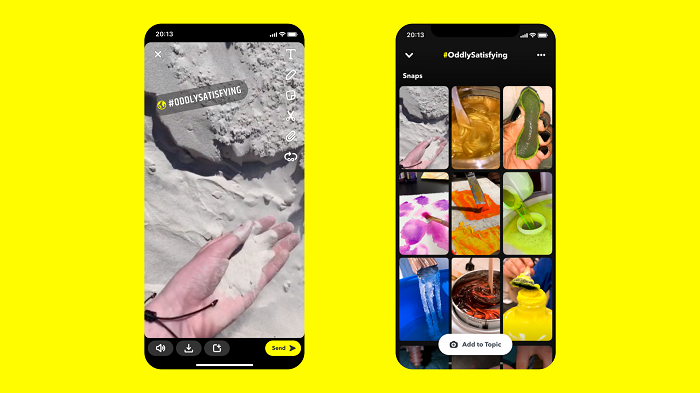 "Use a Topic sticker or submit your Snap to a Community Topic, like “Life Hacks” or “Oddly Satisfying” and browse Topic Pages to explore Snaps based on what you care about most."

Snapchat says that more than 3 million users add their Snaps to the collective Our Story content every day, enabling people to see what’s happening around the world. Topics will provide another option on this front - and again, it functions pretty much exactly like hashtags for public Snaps.

Snapchat's also adding a new 'Happening Now' feature within Discover, which will enable users to stay up to date with the latest news and events via short, sharp updates. 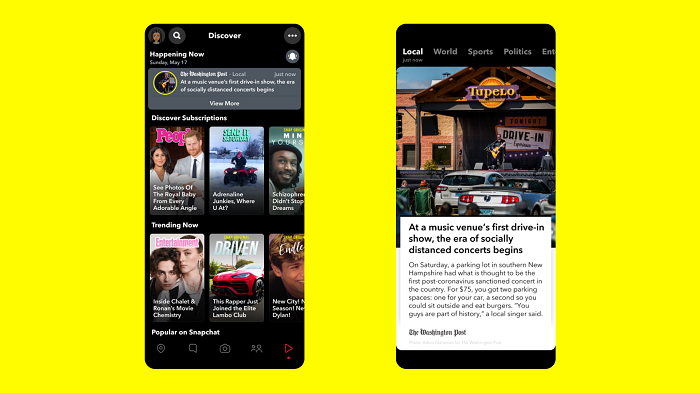 "We’ve partnered with some of the most trusted news organizations, like The Washington Post, Bloomberg, Reuters, NBC News, ESPN, NowThis, E! News, Daily Mail, BuzzFeed News and more, to turn updates on the biggest stories across politics, entertainment, sports and more into single Snaps - creating a new format designed for the fast and frequent way Snapchatters view breaking news on mobile."

Snap's editorial team will also be curating a selection of publicly shared Snaps to be displayed within the Happening Now listings. Happening Now is launching in the US this week.

And an interesting one for brands - Snapchat's also adding new Places listings to the Snap Map. 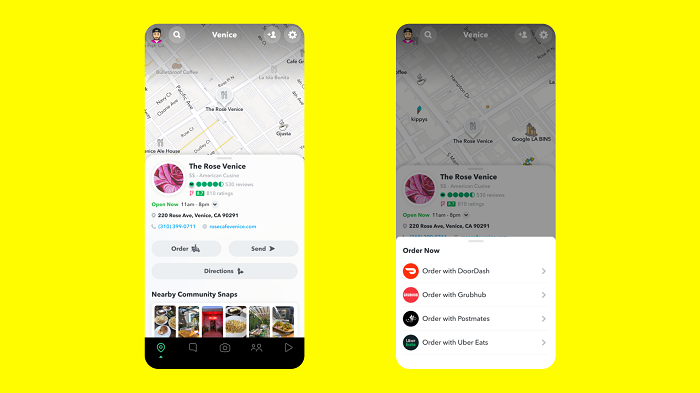 As you can see here, the new Places option will highlight stores and popular places, with supplementary information including Snaps from the location, the address, hours of operation, and reviews from TripAdvisor and Foursquare. It will also facilitate direct ordering from food businesses within the app,

Snapchat says that it's adding "millions of listings for businesses around the world", with Places rolling out on iOS and Android in the US from today. It's not clear, at this stage, whether businesses will be able to edit or update those listings.

Snap's original shows have seen a significant rise in popularity - last October, Snap reported that daily time spent watching its Discover content has increased 40% year-over-year. These new programs aim to help it capitalize on that opportunity.

"More than half of the U.S. Gen Z population are watching Snap Originals. Part of what makes Snap Originals so unique is not just the way the stories are told, but the types of stories that reflect the wide range of passions, experiences and voices of our community."

"​We’re using our unique augmented reality technologies to deliver immersive shows that are only possible on Snapchat. You can now learn the latest dance moves from some of the world's best dancers in "Move It," which uses Snap's custom motion tracking Lenses to keep up with your every step."

This is just one of several ways in which Snap will be looking to make its original programs more immersive and involving through its digital tools.

And lastly, Snapchat's also providing some new tools expand upon its Here For You mental wellbeing resource. 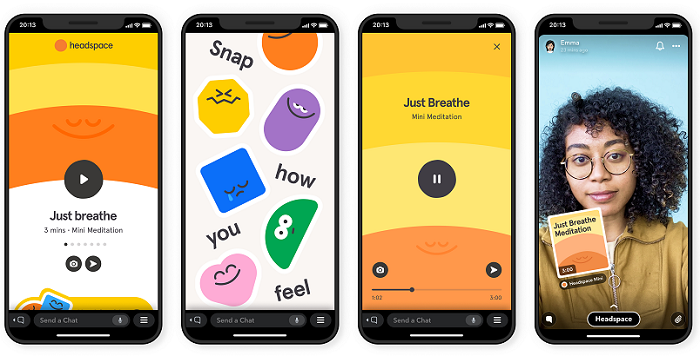 Snapchat's partnering with Headspace to offer new content within its Here For You tools, including guided mini-meditations, and tips on how people can check in on their friends. Snapchat's also looking to improve its processes that connect users at risk to emergency services and trained counselors.

With the COVID-19 lockdowns set to exacerbate mental health concerns, this is an important step, and it's good to see Snapchat keeping this as a focus as it looks to expand.

As you can see, there's a heap of new options coming to the app, and heap to take in. Snap has provided more in-depth rundowns on each element at the noted links, and we'll provide additional info on the new tools as they become more widely available.