App Annie has published its annual review of the top performing apps by downloads and revenue, which once again underlines the dominance of TikTok, and the influence that it’s having in broader social media space.

As explained by App Annie:

“[TikTok’s] influence on the 2021 data is obvious. It ranked #2 in the breakout app spend chart (this chart ranks apps that have registered the biggest change in spend over 12 months), and it also propelled CapCut to the top of the breakout downloads chart. Why? Because CapCut is an editing tool for TikTok, which rolled out globally in April 2020.” 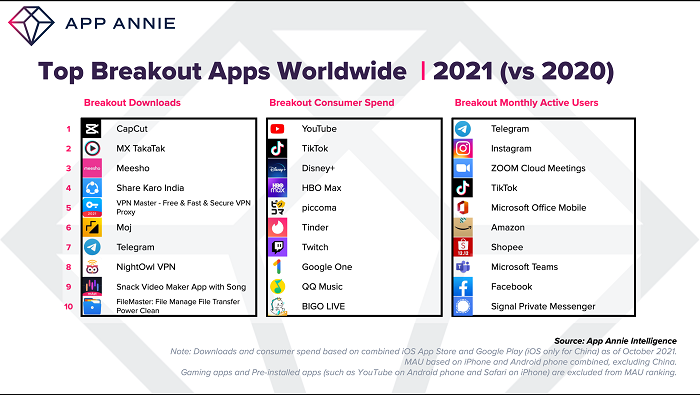 As you can see here, both TikTok and CapCut rank high in each list, though Instagram remains strong in active users, with Facebook down at the bottom of the top 10.

But it’s not just TikTok’s own apps that highlight its influence, with TikTok replica apps like India’s MX TakaTak and Moj also gaining traction, as replacements for TikTok which is banned in the region.

That broader impact is why every social app is now trying to add in TikTok-like features and elements, because the broader shift is not just based on TikTok’s own rise, but the habitual trends and behaviors that it's inspiring, which users are now actively engaging with in other spaces.

Does that mean all apps will eventually look like TikTok? Yeah, it probably does, with Twitter launching a new experiment with its Explore feed, converting it into a TikTok-type display, and Instagram also now testing out a new vertical format for Stories as well.

Pinterest’s Idea Pins are getting more TikTok-like, Snapchat’s Spotlight feed already utilizes a full-screen, swipeable UI. It’s safe to say that usage trends point to everything going TikTok-style, at least until the theoretical metaverse takes over, and we’re all engaging in wholly immersive virtual environments.

In terms of overall app spend, according to App Annie’s data, TikTok has also seen the biggest jump year-over-year. 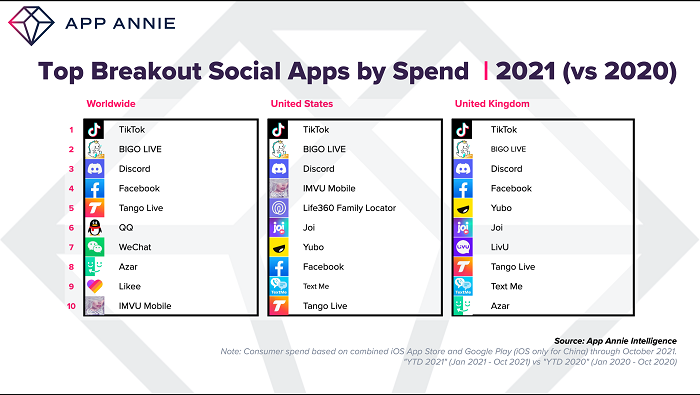 That bodes well for the app’s expanded eCommerce and monetization ambitions, which will help fuel its creator economy, which will be a key element in growing the app beyond a billion users.

Short-form video can’t utilize in-stream ads, so platforms need to find alternative monetization pathways, and for TikTok, that will largely hinge on its ability to facilitate eCommerce and brand deals for creators.

If it can ensure creators get paid, they’ll keep them posting to the app, and building their audience – but if other platforms have better revenue share deals on offer, you can bet that they’ll migrate away over time.

The data here suggests that TikTok is in a strong position to keep growing, and facilitating business opportunities for more creators.

Of course, none of this is surprising, as pretty much every report has reinforced TikTok’s rising strength, and as noted, every social app is now working to negate TikTok’s expansion if they can. But it’s another reminder of the platform’s influence and position, which may well see it become the biggest social platform in the final stages of the medium as we know it, before we move onto the next phase of digital connection.