Twitter has announced some new updates to its ad platform which are designed to streamline ad targeting, while also providing more insights on campaign performance.

First off, Twitter’s changing the name of its ‘Website Clicks & Conversions’ objective to ‘Website Traffic’, a more generalized header, which will now also include a new ‘Site Visits Optimization’ goal within your available campaign objectives. 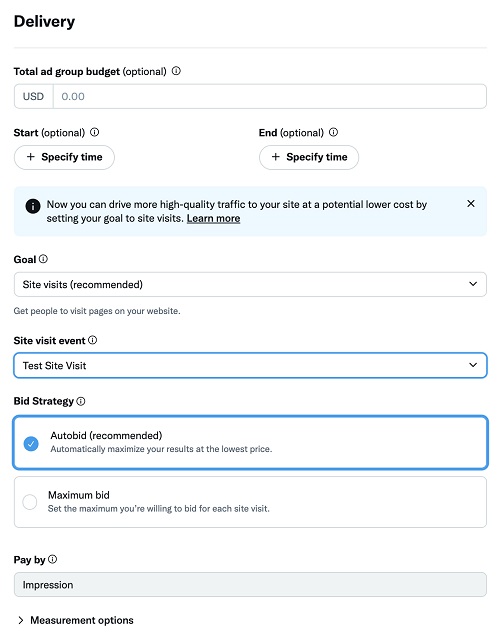 As you can see here, now, when setting up a Website Traffic campaign, you’ll be able to use ‘Site visits’ as the goal, which will then direct Twitter’s system to serve your ads to audiences most likely to visit your website.

That will then enable Twitter’s systems to better determine audience objectives, and present your ads to the right users. Twitter says that it’s seen strong results with site visits in testing, and it’ll be interesting to see whether the new goal generates better direct response to your promoted tweets.

In addition to this, Twitter’s also adding a new aggregated view of site metrics and conversion events within Twitter Ads Manager, which Twitter’s adding as a means to counter data loss as a result of Apple’s ATT update, and more users opting out of in-app tracking.

The process will utilize data gathered via Twitter’s website tag to provide a generalized estimate of key metrics, by Ad Group, at campaign level, by device type (iOS or Android), and placement-level, where possible.

The data obviously won’t be as accurate as you would get from direct reporting via the Twitter tag on each user response, but by providing some insight into user actions, Twitter will be able to replace a level of indicative insight that’s been lost due to the iOS change.

As you can see here, the new Events Manager overview will provide in-depth insight on tag events, enabling you to better track and utilize the data being gathered from your site visitors.

These are handy updates, more focused on advanced Twitter marketers, but facilitating new levels of ad performance insight, which could help to maximize your ad results. And while aggregated data is no replacement for direct attribution, in the wake of Apple’s ATT update, marketers need to work with what they can, and these supplemental insights will help to provide more guidance in your approach.