Twitter has announced that it will call on all candidates in the US election race to review their account security settings in order to maximize protection, and reduce potential misinformation and hacking efforts during the campaign. 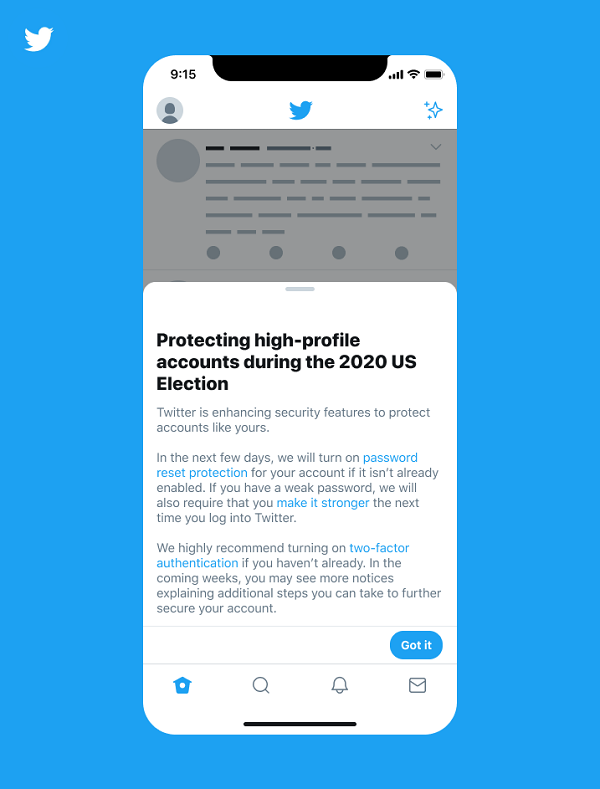 "We’re taking the additional step of proactively implementing account security measures for a designated group of high-profile, election-related Twitter accounts in the US. Starting today, these accounts will be informed via an in-app notification from Twitter of some of the initial account security measures we will be requiring or strongly recommending going forward."

As you can see in the above screenshot, all 'election-related' accounts will be asked to re-assess their password, if Twitter's system determines that the current one is weak, while Twitter will also enable Password reset protection for these accounts by default.

"This is a setting that helps prevent unauthorized password changes by requiring an account to confirm its email address or phone number to initiate a password reset."

These accounts will also be asked to switch on two-factor authentication to further secure their presence.

The notification will be sent not only to politicians, but to a range of 'election-related' users, including:

It's a good, timely refresher from Twitter, which will help reduce the potential of account hacking and misrepresentation, which could cause major damage during the campaign.

And it's particularly relevant right now, given that just two months ago, various high-profile Twitter accounts were hacked and ended up sending out messages related to a cryptocurrency scam. That hack included the account of Presidential candidate Joe Biden.

The hack was conducted by a group that had gained access to Twitter's internal control panel, so these measures wouldn't actually have helped in that particular instance. But the incident definitely served as a reminder of the potential damage that could be caused by bad actors if indeed they're able to access these high profile accounts.

And conversely, the incident may also have acted as an incentive for foreign groups looking for ways to influence the US Election. Hacking a Twitter account could be another way for these operatives to spread their divisive messages.

In addition to this, Twitter also says that it will soon implement additional proactive security safeguards, including:

​Again, these seem largely related to the recent Twitter hack, through which all verified accounts lost access to their Twitter accounts for a time. If that were to occur again, at a crucial stage of the election, it could have major impacts, so it makes sense for Twitter to be looking to implement more proactive, responsive measures on this front.