Along with the re-opening of profile verification applications today, Twitter has also outlined a coming update to the user profile format, which will include a new 'About' tab to provide more context as to your experiences and interests. 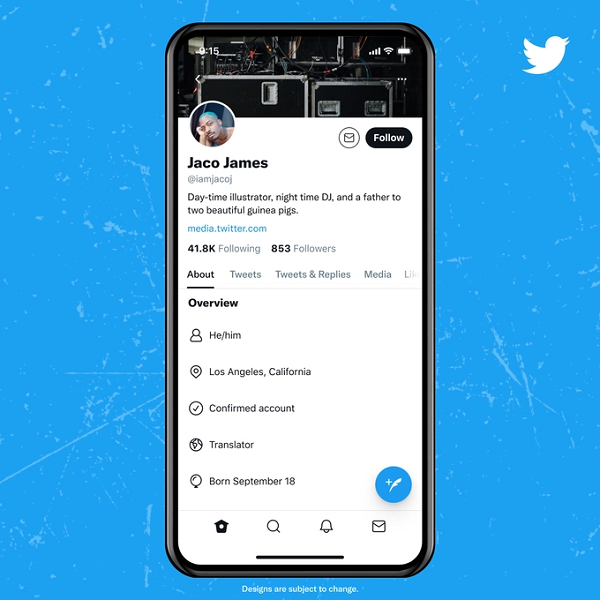 As you can see here, the 'About' tab, as it currently stands (in testing), will provide a range of additional profile info fields, including preferred pronouns, translator status, interests, etc.

That, eventually, could also be expanded to include additional info fields and links, like a more in-depth bio, or connection though to a podcast, newsletter, or even saved Spaces and audio content.

It's part of Twitter's renewed focus on increasing transparency, and enhancing connection by providing more context.

As explained by Twitter's Andrea Conway:

"Today, we don’t give people a ton of ways to express themselves, and in turn, we limit the number of signals available to understand the quality of that account, and help people determine who and what to trust on Twitter.”

The idea is that by providing more information, that will help enhance user connection, and better guide people as to who to follow and interact with in the app.

As you can also see in the screenshot, there's a 'Confirmed account' field here, which could have a particularly helpful use case.

"Another notable new feature will be the ability to display whether your Twitter account is confirmed. That means you’ve verified your account with Twitter via email or phone. It’s a signal that could help to invite trust - or at least keep you from being trolled by being called a “bot,” a common Twitter insult that’s often levied during heated debates."

TechCrunch also notes that this could help provide a sense of validity in the absence of the coveted verifcation checkmark, which could additionally serve as a means to help clarify information sources and reduce the spread of misinformation - or specifically, the amplification of certain messaging via bot accounts.

But then again, that would involve users taking the additional step of checking these new fields before sharing, which probably won't happen. But still, it's an interesting set of additions that could have a range of impacts - and it's also interesting to consider the additional ways in which this could be used to improve user representation and connection in future.

The update is still in testing, with no schedule for a live launch as yet.