With the annual March Madness college basketball tournament set to get underway this week, Twitter Marketing has launched its own variation, with its 'Brand Bracket', designed to determine the best tweeting business on the platform. 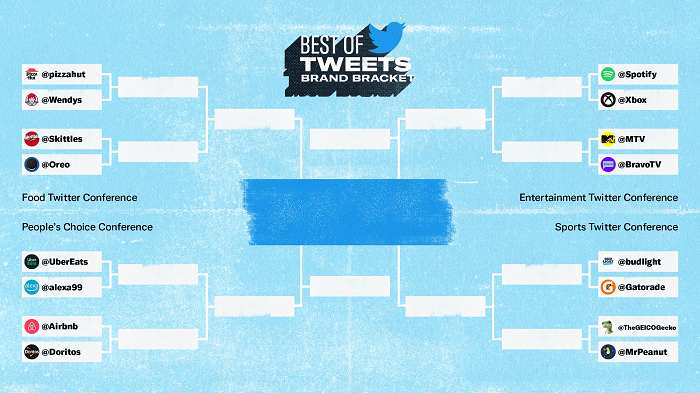 As you can see here, over the past few months, Twitter has identified the best brands, based on their tweet activity, in a range of categories.

"We know the conversational nature of Twitter makes it a place where brands can be their most human-sounding selves. Brands can have two-way conversations with their audience that are real and unfiltered, and can’t be replicated anywhere else. With this bracket, we aim to celebrate those that do this the best - as selected by the people of Twitter."

Twitter's now pitting each business head-to-head, and asking Twitter users to vote on the winners of each match-up.

That will ultimately lead to a final showdown, and a winner of Twitter's Brand Bracket for 2021.

The initiative is similar to Twitter's annual Brand Bowl promotion, which determines the best performing Super Bowl campaigns on the platform. That's obviously helped generate discussion, because now Twitter's looking to expand the same into another sporting event.

It's an interesting way to go about it, which could get more people looking at each brand's tweets, offering extra promotion to the featured businesses.

It's also, in itself, a good, simple example of an effective event tie-in campaign. Many brands could run similar, pitting their own products, for example, against each other on their own bracket.

And for marketers, it could also be a good way to discover new Twitter tips, by checking out the handles listed.

Twitter says that the Brand Bracket tournament will run for the next few weeks, with the winners to be announced on April 2nd.