Have you used the new Facebook Notes yet? Facebook announced an update to Notes in September, improving the look and feel of the tool with a view to encouraging more bloggers to consider Facebook as a posting option. Why would bloggers post direct to Facebook? Because the platform has unmatched reach and can introduce your content to a whole new audience through shares and engagement. And while they haven't pushed Notes too hard as yet, you can expect that Facebook, as part of its ongoing quest to 'win' the internet and have all users on the platform, all of the time, will be making a concerted effort to promote Notes over the next few months, alongside the growth of their 'Instant Articles' platform for publishers.

For now, though, The Social Network is keeping it low key - and late last week, Facebook provided a gentle reminder that Notes has been updated and is worth considering as a blogging option.

In a post on the Facebook Media blog, The Social Network outlined some best practices for using the new Notes. The post offers no introduction, no fanfare about the new Notes and how great the features are, just a simple, step-by-step guide on how to use the tool. 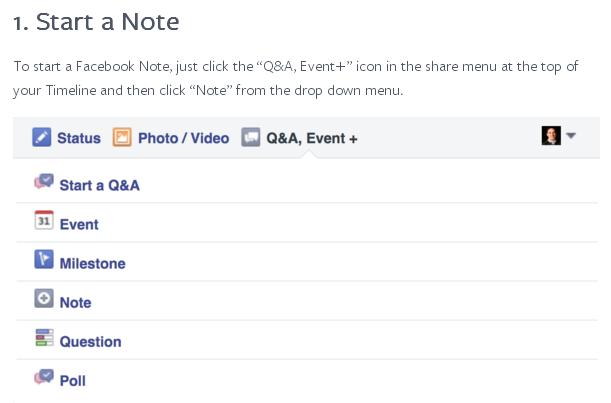 Among the tips are:

All pretty general blogging notes, but Facebook's overview is really more a subtle nod towards the new additions and features available in Notes, details that many users would not be aware of. Interesting, too, that this update is in the Facebook Media blog, aimed at communications professionals and media identities, people whom Facebook would love to have contributing exclusive content to the platform.

And that's clearly Facebook's idea with this post - in the last section of the update, Facebook highlights some of the best examples of creative uses of the new Notes they've seen thus far, including:

The strategy here appears to be similar to how Facebook's going about moving into live-streaming - by showcasing and focusing on celebrity and high-profile users, it builds attention and interest in the offering, which then leads to more people wanting to try it out. In the case of Facebook Live, this could position the platform to dominate live-streaming - if Facebook were to generate enough interest in the offering from celebrities, they could create a separate platform for Facebook Live content, which would showcase all the live-streams happening at any given time across the network, much of it from celebrity users. If they were then to allow all users to post their own live-stream content, which would be placed in amongst that highly-viewed, celebrity material, that would be a big lure for creators, a big potential platform for streamers to use.

With notes, Facebook could do similar - if enough high-profile users were creating regular content, Notes could become its own platform, similar to LinkedIn's Pulse, with a wide range of popular content and the option to have your content featured amongst that material. This was, of course, the lure LinkedIn used when they opened up their publishing platform to all users, though they've since reduced the reach of Publisher content to avoid users being inundated. Facebook would be better equipped to handle any such influx of content, as their algorithm's already attuned to delivering the most relevant content to each user and is more advanced that LinkedIn's system in this regard.

The main difference between Notes and Live, however, is that while Facebook Live is only available to those with verified profiles, the new Notes is already available to all users - the Medium-style format is now the standard for all Facebook Notes posts. If you like what you see in these examples, you can start testing for yourself - Facebook would love nothing more than to have you posting your content exclusively to their platform.

In the near future, I'd expect Facebook to ramp up its promotion of the new Notes tools, as well as maybe introducing more 'Instant Articles'-style features to the new blog option in order to entice more creators to publish on Facebook. The posts will get great reach, they'll load faster on mobile and they'll be more responsive - blogging on Facebook could be a good option. That is, of course, if you're comfortable building an audience on borrowed land.

Do you trust Zuckerberg and Co as your content landlords? That's a question that will become ever more pressing for all web publishers in 2016.