Facebook released a new study which looks at how both Facebook and Instagram are being used to discuss fashion, including data on hashtags, seasonal peaks and the adoption of Facebook groups among fashion fans.

The insights covered highlight a range of relevant trends for any brand working in or around the fashion sector, providing key notes on when, and how, to reach fashion fans, and which fashion items are most popular in various nations.

First off on seasonal trends - Facebook's data shows that fashion discussion is fairly consistent throughout the year:

"There's a slight peak in shopping conversations around Christmas and the annual Halloween costume discussion causes a spike in conversations about clothes in October."

Facebook also found the peak day for conversations related to fashion is Saturday.

While most of these trends would be known to those in the sector, it is interesting to note that fashion remains a key conversation piece throughout the year, aside from the noted peaks. This points to both Facebook and Instagram being key platforms of opportunity for fashion brands, which is further underlined in the rest of the report.

Facebook's researchers also looked at the way fashion is discussed in each nation, and the differences in both the language used around fashion and the most discussed fashion items. 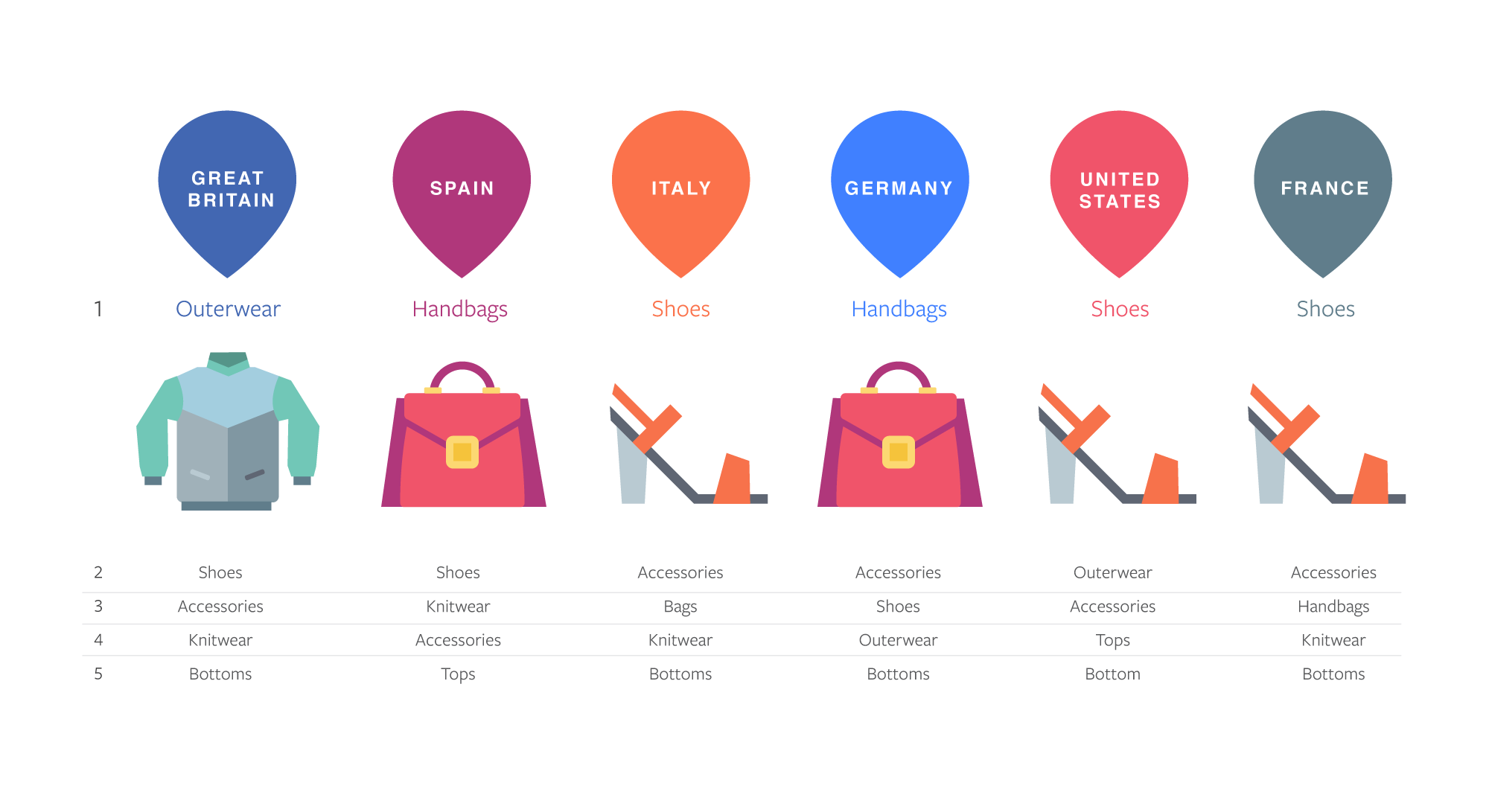 As you can see, shoes remain near the top in most regions, but there are significant variances around the other key topics.

The researchers also found that British users are more likely to associate shopping with 'pampering' or 'treats', while American users are more inclined to discuss 'errands', 'cart' or 'mall' in their fashion-related discussion. It's hard to say how relevant this sort of broad segmentation is - just because British users are more inclined to see fashion as a treat, that doesn't mean they're less interested in functional wear, necessarily. Really, it comes down to your unique audience in each region, and generalized trends like this are probably not overly beneficial, outside of being an interesting observation.

Also worth noting - Facebook found that 37% of mentions of shopping, clothes and accessories on Facebook are made by men. While female shoppers remain the driving force in the wider fashion conversation, it's clear that men are also paying attention, which is a trend also seen on other platforms like Pinterest.

Facebook's researchers also examined the usage habits of Instagram users who use the hashtag #fashion, in comparison to those who don't.

They found that #fashion users:

Some interesting notes - some brands might avoid using the hashtag #fashion because it's so popular, and thus, may not provide you with increased reach (due to competition), but it may be worth noting those users within your audience who do use this hashtag when conducting your audience research, and considering how you might be able to tap into these increased usage trends to help amplify your message.

"On average, across the six countries we studied, there are 52k fashion-related groups per country, with around 320 active members in each group."

Facebook groups are fast becoming the not-so secret weapon of Facebook marketing - with more than a billion monthly active group participants, Facebook's looking to encourage more group use by businesses to help them build community, rather than just virtual shopfronts. In the last six months, Facebook's introduced the ability to link groups to Pages and for brands to participate in group discussions as Pages, two key tools worth noting for any Page looking for new options to boost their Facebook engagement and reach.

There's a heap more fashion insights in the full Facebook IQ report, definitely worth a read for any brand in the fashion sector.