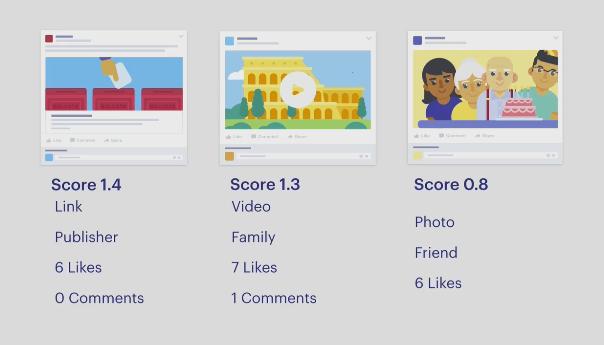 Back in June, and in the wake of the Trending News controversy, Facebook announced a major update to their News Feed algorithm that would put more priority on content from friends and family. As part of that announcement, Facebook also released their 'News Feed Values' document, part of an effort to be more transparent about News Feed updates and changes. And they're certainly holding true to that - it was only last week that we got a News Feed update which focused on stamping out clickbait, and now we have another, this time looking to highlight 'informative content'.

Here's what it means in practice.

"With this update, we're creating a new ranking signal to predict what is most informative to you, so those stories appear higher in your feed. First, we look at the stories that people tell us they find informative. People from our Feed Quality Program look at each story in their feed and rank it on a scale of one to five - one being "really not informative" and five being "really informative."

Facebook's Feed Quality Panel has been in place since 2014, a group of several hundred people who continuously go through their News Feeds and provide feedback on what they see, including how much they like or dislike each post and what they would prefer to have show up. Based on this, Facebook's able to add a human response element to their News Feed calculations.

In this instance, Facebook's again putting further pressure on clickbait and the like - if you clicked on an article with a headline that promised to tell you all about a subject and it didn't really back that up, your subsequent actions - Likes, comments, shares - would indicate that it wasn't "really informative" for your purposes, which would then mean that posts from that publisher would likely show up less in your feed as a result.

"Generally, we've found people find stories informative if they're related to their interests, if they engage people in broader discussions and if they contain news about the world around them. That could be anything from recipes, to local issues, to global current events."

So the impetus of this update is to give high quality publishers, as defined by their personal relevance to you, more reach opportunity.

For example, if you're into motorbikes and you regularly read and engage with content from Motorbike Magazine, this new update will provide the algorithm with more signals to determine the relevance of that publication to you, which will then ensure you see more of their content as a result.

In some ways, this update balances out the recent 'Friends and Family' change, which, at the time, Facebook said would have a "noticeable impact" on Page reach. That raised concerns for many publishers, particularly as Facebook's been encouraging them to post more content direct to Facebook via Instant Articles, inviting them in with the promise of unmatched reach. To then make an announcement which actively reduces that served as a reminder to many that you're building on rented land, that Facebook can and will change the rules, and developing a reliance on the platform's reach could be a mistake.

Of course, "small" is relative - what you think is minor could be major depending on how much you rely on Facebook referral traffic - but the impetus behind this new update again underlines the wider Facebook ethos. Post stories that are relevant, and informative, for your audience, and your reach should remain steady throughout the change.

So what does this mean for Page owners?

As noted by Facebook, it all relates to how often each person clicks on and engages with your posts. Facebook also factors in read times and other engagement metrics, so it's basically another way to highlight the content that you engage with more, in amongst those stories from family and friends.

As noted, the change doesn't really add anything new - in fact, Facebook told TechCrunch that it's more about re-ordering those stories that are deemed relevant for your News Feed - but it does give publishers more opportunity to be seen now that content from your personal connections are also being given higher priority. Most people, of course, still want to see publisher content among those updates, so this change gives Facebook another way to ensure interested readers are seeing the publisher content most relevant to their interests.

That said, if you're looking for a way to boost your chances of getting more reach as a result of this update, you need to consider how you encourage engagement - analyze what content you or those in your niche are publishing that's generating more shares and interaction and look to provide more of that type of material to your audience. Those engagement factors all indicate to Facebook that your Page followers are finding your content "really informative", which will likely see your posts given higher position in News Feeds as a result.