With live-streaming still running hot in social media circles, Periscope is looking to boost their broadcaster engagement with a new Periscope VIP program which will offer rewards to users based on various goals and metrics.

And while it's an interesting idea, it also further shifts live-streaming away from its original use case, which was to enhance immediate connection for all users. But really, that's a necessary shift - as all live-stream platforms have found, the difficult part about maintaining a functional live content eco-system is content quality, just because everyone can broadcast themselves live, doesn't mean they should. Periscope's VIP system aims to provide more motivation for popular broadcasters to use the platform more often - though given the threshold for entry, and subsequent rewards provided, it's hard to tell what exactly the effect of that will be.

So what's on offer as part of Periscope's VIP program? First off, once you qualify for a VIP listing, you'll get a new badge on your Periscope profile identifying you as a "Very Important Periscoper".

Those badges are based on tiers - Bronze, Silver and Gold - as defined by your on-platform actions and audience.

To qualify for each, you need to reach certain benchmarks, with the minimum level entrant (Bronze) needing 10k followers, an average of 200+ total live viewers per broadcast, and to be broadcasting twice a week.

Here's a breakdown of each of Periscope's VIP tiers. 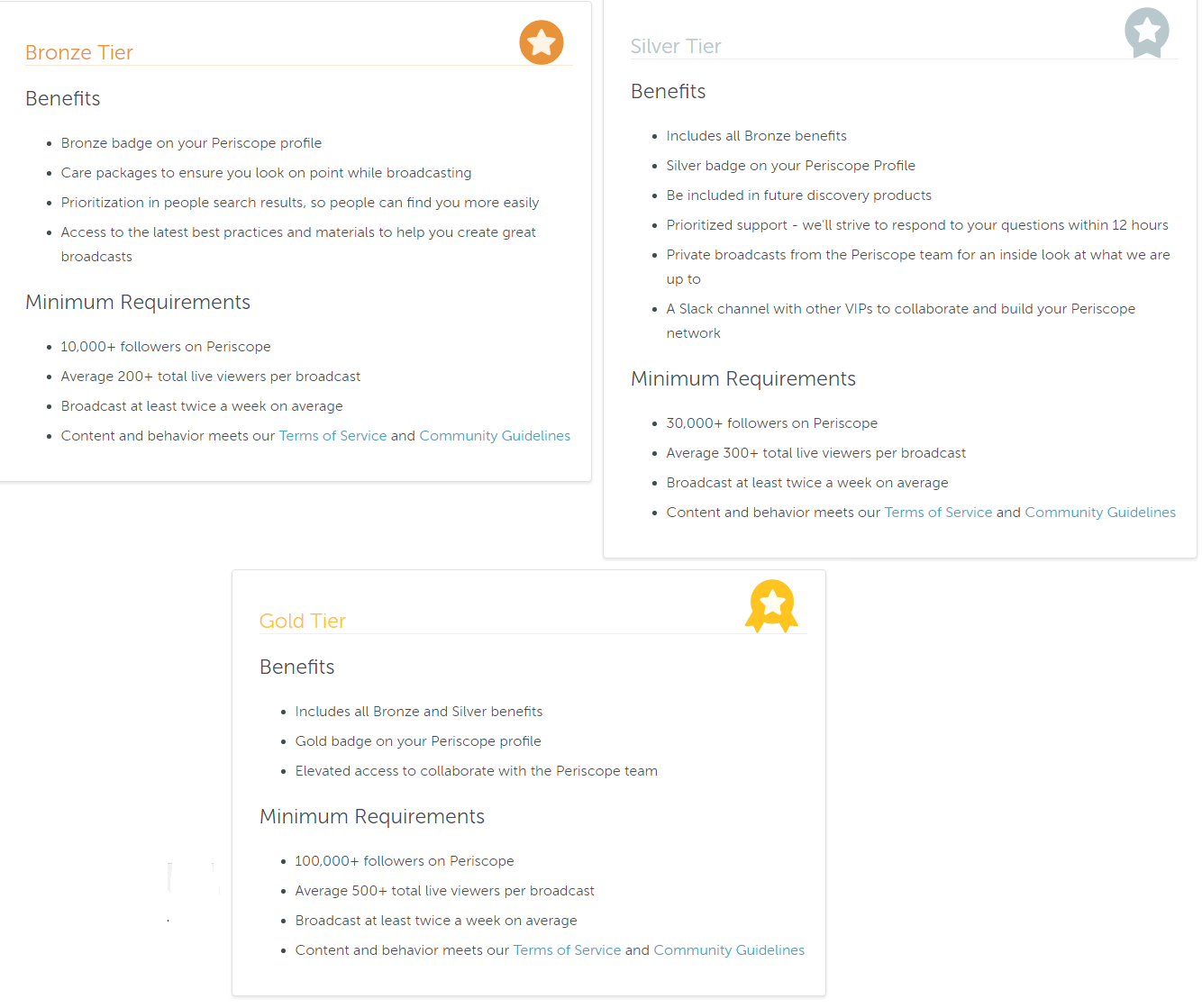 As you can see, you need to be a really active Periscope to qualify. As noted too, the available benefits are as follows:

Those benefits aren't bad, but not amazing either, and it's hard to see them being a significant incentive for broadcasters to aspire to. Really, if you have 10k+ followers and 200 live viewers per broadcast, you're already pretty aligned with the platform either way, and if you're not, these rewards probably won't to be enough to motivate you to hit those higher benchmarks.

But that said, direct connection with the Periscope development team is a big plus for those truly high-profile creators, enabling them to get their queries answered faster and to have a say in future projects.

The Periscope VIP program is the latest in Twitter's efforts to better ingratiate themselves with their creative community, one of the five pillars of focus outlined by CEO Jack Dorsey in order to reinvigorate the platform. Other measures on this front have included improved Twitter/Vine profile integration, the introduction of their new 'Engage' platform and the addition of new revenue share options on video content. And while all of these features are important, Twitter's facing an uphill battle to get their creative talent to stick around, with both Facebook and YouTube offering bigger audiences, greater exposure and increased revenue opportunities. On this front, Facebook has been actively seeking out prominent content creators on other platforms for Facebook Live, offering big deals to have them produce exclusive content, and making it even more difficult for Twitter to compete.

In some respects, Twitter's waited too long to introduce compelling incentives for creators, but then again, Periscope's only been around for 18 months, and their bigger focus has been on evolving the product and their live-stream offerings - most notably, their new live broadcast offerings, highlighted by their new NFL partnership which only kicked off in the last two weeks. That's where Twitter's putting big bets, and as such, they're likely hoping the enthusiasm and adoption of those new live-streams will eventually lead to the development of a more enticing creator platform. Twitter had 2.3 million people tune in for their first NFL stream, if they can build upon that and make Twitter a bigger resource for live content, they'll eventually have a larger stage to help promote their other live-stream offerings, including individual broadcasters, making it a more enticing option for creators.

And then, of course, there's the possibility of a takeover - as noted by TechCrunch today, an integration of Twitter and YouTube could also be the start of a bigger, more compelling video content platform, and rather than having to compete with those bigger players, Twitter could become one through acquisition, if Google were to move forward with a takeover bid.

Given all the parts in motion, it's hard to know where Twitter stands with its video platform at this stage - and given the high barrier to entry, Periscope's VIP platform doesn't seem to add a heap to the process. Really, it's just a way to give prominent creators a pat on the back and make them feel part of the team. Which is a positive move in itself, and no doubt one that's been requested by those creators, but the rewards for effort seem relatively minor in the wider scheme.