Twitter-owned video app Vine has announced an update which will enable users to better align their Twitter and Vine profiles, adding increased exposure potential to each.

The change is relatively straight-forward - on Vine, if you've connected your Twitter account, your Twitter username will now appear on your Vine profile and in Vine messages. 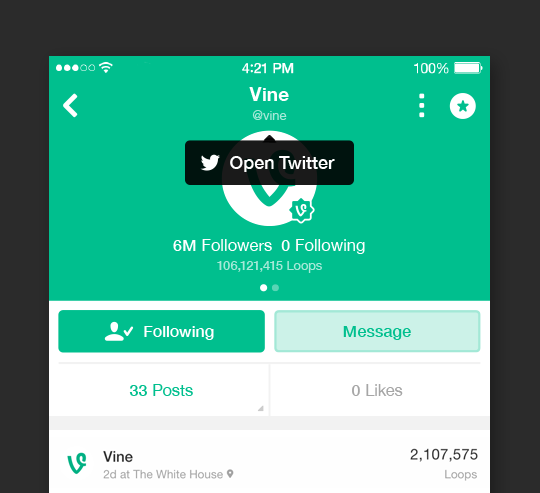 This will also make it easier for people to find Twitter friends on Vine, as you'll be able to search by Twitter handle to look them up on the app. When someone taps your Twitter username, they'll be taken direct to your Twitter account, giving Vine users an additional way to connect with their favorite creators.

As shown in the image above, visitors to your Twitter profile will see not only your Vine account link, but also a listing of your total loops on the app - a figure they'll also now be able to see when they visit your profile on Vine. When they tap on either link, they'll be taken to your Vine profile.

Released in 2013, Vine has established itself as a valuable content channel, with more than 100 million monthly active users viewing over a billion Vine loops every day. One of Vine's biggest strengths has been in providing a creative platform for new talent - Vine creators like Lele Pons, KingBach, and Logan Paul have all been able to leverage their Vine content into lucrative careers, helping brands create highly shareable content that appeals directly to the Millenial audience. While other platforms like Snapchat and Instagram have continued to get most of the attention in the visual social media space, and video has become a larger focus for both Facebook and Twitter, Vine has quietly continued its own upward trajectory, and has become a major focus for many large brands.

This update will particularly help those Vine creators who are looking to better promote themselves and get attention for their work. This closely aligns with Twitter's acquisition of Niche in February, a talent discovery platform which "matches social media stars with marketers and advertisers who want to reach the young users who inhabit those platforms full-time". By better aligning with these creators, Twitter is working to establish stronger bonds and keep their content tied to Vine, rather than see them move off to other platforms. Twitter also recently announced new video monetization options which will enable creators to generate income from video ad ads linked to their content, offering a larger cut of the revenue than what's on offer from YouTube or Facebook.

"Discovery happens on distribution platforms, and today those distribution panels are social networks like Twitter, Facebook, YouTube and Snapchat. As people are more used to having multiple devices in front of them at all times, how and where they consume content is changing too. Why make it harder for people to go to another place to watch a video or see your photos when what they really want is to get in, find what they want, and get out?"

The latest Vine update moves in-line with this trend, and in building relationships between Twitter and its expanding creative community.