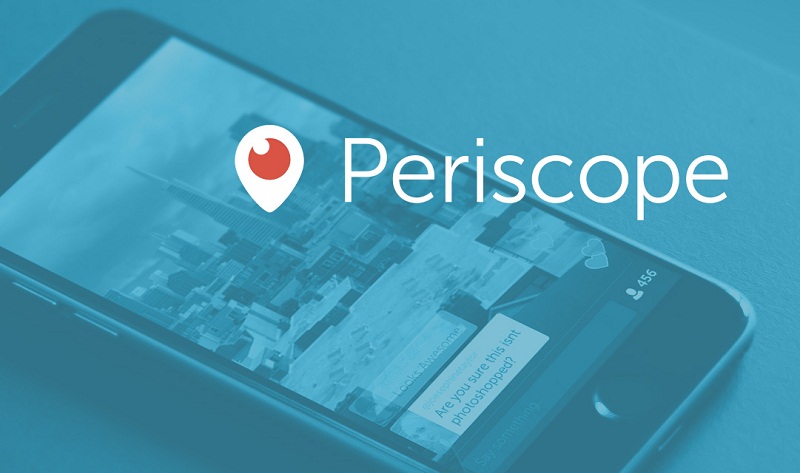 Live-streaming is the trend of the moment. Combining the rising consumption of video content and the immediate connectivity of social networks, live-streaming puts a new spin on how we connect, and is viewed by many as the next iteration of social media more widely.

The reinvigoration of live-streaming started with Meerkat at SXSW in March last year, which provided people with the means to 'go live' and broadcast what was happening in their world, direct from their mobile device. And while live-streaming in itself wasn't a new function, the capacity to do it so easily was a fresh take, and it opened people's eyes to the huge amount of potential that this improved opportunity could hold.

Shortly after the release of Meerkat (25 days to be exact), Twitter announced the arrival of Periscope, a similar live-streaming platform which they'd acquired only two months earlier. Twitter had been planning to keep Periscope in development a little longer, but the hype around Meerkat pushed the release, and through its integration with Twitter (as well as Twitter's decision to revoke Meerkat's access to their social graph), Periscope quickly became the dominant player in the new live-stream market.

Now with more than 10 million accounts, 2 million daily active users and the time equivalent of over 110 years worth of video content being consumed via the platform every day, Periscope has become a major part of Twitter's re-invigoration strategy - in fact, when Twitter CEO Jack Dorsey recently outlined the platform's revised priority focus in an interview with BBC, 'Maximize Live Video' was second only to 'Refine and Simplify the Product' on his list.

Periscope's success or failure is crucial to Twitter's future, and that combined with the ever rising threat posed by Facebook Live makes this a particularly interesting time to get the perspective of Periscope founder and CEO Kayvon Beykpour, who this week sat down for an interview at the Cannes Lions Festival, which was subsequently broadcast by Twitter Advertising on Periscope.

Here are some of the highlights of Beykpour's session.

Not surprisingly, Beykpour first made note of the #NoBillNoBreak protest being held in the US House of Representatives, much of which was broadcast on Periscope after the C-SPAN cameras were shut off. Many have tagged this as a defining moment for Periscope, a chance to break into the mainstream (Time Magazine, for example, published an article shortly after titled "How Periscope is Changing Politics"). And while such rhetoric may be over-stepping its significance, Beykpour was obviously keen to highlight the event.

"[It's a] pretty historic moment [for Periscope], to have that signal of legitimacy as part of the democratic process."

Beykpour also praised the efforts of Periscope's editorial and community team for responding so quickly to the incident after they set up a dedicated channel to make it easier for viewers to follow along.

Beykpour took the opportunity to note that they have an editorial and community team who are constantly working hard to highlight relevant content like this and push it out to the Periscope community.

Beykpour also discussed the evolution of live-streaming and where he sees Periscope growing and providing value. Beykpour noted that, first and foremost, audience interaction is the key element of the new live-stream process.

"That we can have this conversation live, I think that's powerful and important - but the audience also has a voice as well, which signifies the first time that the live medium has evolved."

This is an important point - while live broadcasts have always been one of the most popular forms of broadcast entertainment, the real innovation of live-streaming is the capacity for the audience to be more than simply passive consumers. People can ask questions, signify responses, even drop-in on the conversation to make the live experience more interactive and immersive.

This is the truly revolutionary and important element of the medium, according to Beykpour, something he further highlighted in his later notes on best practices.

"The most important [thing] is making sure that you, as a broadcaster, acknowledge the audience. You could be doing the most mundane thing in your broadcast, but if you acknowledge the audience and if you respond to their questions or if you take their advice and do things that they ask - like someone might say "Hey Kayvon, go put your feet in the water", and if I go put my feet in the water right now, that would probably make someone really happy because they asked and I delivered. So that's probably the single most important piece of feedback we provide any broadcaster, whether it's an individual or a brand."

That's also an important element to consider in your own live-stream broadcasts - sometimes it can seem jarring or disruptive when a broadcaster is constantly acknowledging every new viewer or every new question during their stream, but that interactive element is what takes Periscope, and live-streaming as a practice, to the next level.

As noted by Beykpour:

Brand Use of Live-Streaming

In terms of how brands can make best use of live-streaming, Beykpour highlighted the early Periscopes of Netflix and car manufacturers as good examples of how the platform can be utilized in creative, engaging ways.

"We were actually very surprised and blown away by how creative brands were early on with Periscope - one of the first broadcasts we saw, in the first week of Periscope, I think, was Netflix using Periscope, and we've seen virtually every car manufacturer - Lamborghini was using Periscope, BMW released a car on Periscope - and again they're leveraging that live audience interaction to do something special, it's not just the fact that you're watching BMW's new car, it's the fact that you can ask the product manager for the BMW i3 why they made certain design decisions and what the fuel efficiency of the car is, in a way that if you were just watching a static video you couldn't. So I think the brands who are doing the most creative work are figuring out that that mechanic is what makes the platform really interesting."

Beykpour also made mention of how BarkBox, a subscription service which delivers dog food and treats each month, uses Periscope to broadcast their monthly merchandise before its sent out, which helps increase connection and affinity with the brand. 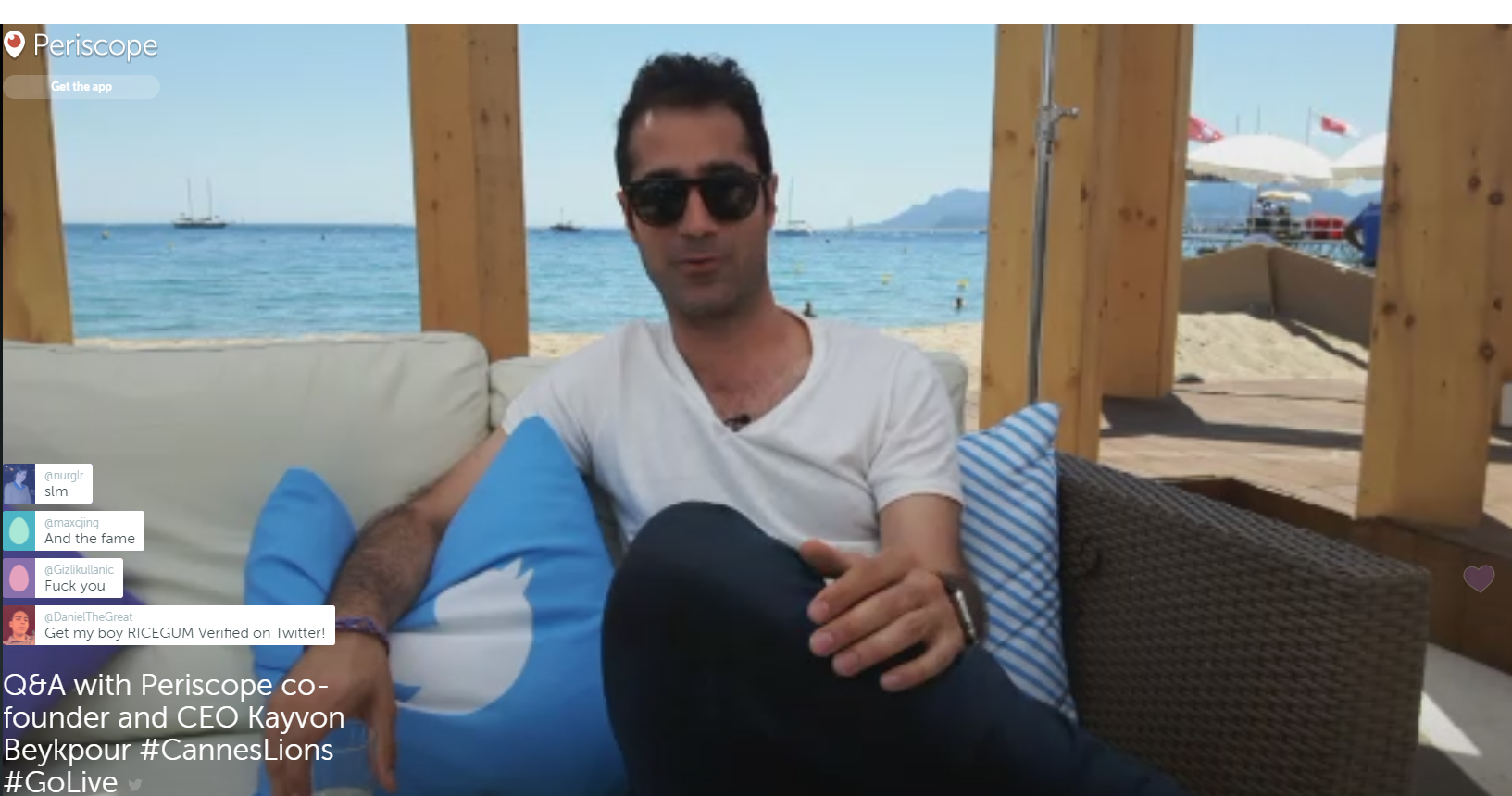 Kayvon Beykpour in Cannes this week

On the Future of Live-Streaming

With Facebook ramping up its live-stream efforts, there's obviously going to be a lot of change in the sector. And while Beykpour didn't go into Facebook Live or those higher levels of competition specifically, he did note that the sector will become "more noisy" moving forward.

"There's going to be a lot of noise because live is now an interesting medium to a lot of people - both to the audience, who clearly see the appeal of watching and interacting live, but also to companies who are in this space or want to be in the space, so you'll see a lot of companies get involved, and you're already seeing a lot of noise and competition in the space. And with more people focusing on the live medium, that'll mean the space will evolve really quickly, and I think that's a good thing."

Beykpour also noted that the medium is largely constrained by the technical limitations of what's available in our pockets - as mobile technology evolves, so too will live-streaming, providing increased capacity for more innovative and connective features and tools.

Beykpour also provided an interesting summary of Periscope's functionality near the end of the interview:

"The interesting dichotomy that's always existed with Periscope is that it both makes the world bigger and smaller at the same time. Periscope can help build truth and empathy - truth because it's live, it's happening now, and empathy because of the fact that I can watch someone commute in Saudi Arabia and I'm connecting and empathizing with people who I otherwise wouldn't have any occasion to interact with."

That, again, underlines that connective capacity of the medium, and the way in which live-streaming can open up the world by enabling us to experience new things and new cultures in real time. In this sense, live-streaming is a perfectly logical evolution in how we communicate - we started sharing images more because they enabled us to provide more context of the moment, to capture that time and space in order to help others see the world as we do. Video takes that a step further, and live-streaming boosts that capacity again, as you're able to share your perspective, live and in real-time, with your audience.

As of right now, live-streaming is as close as we can get to sharing what we see through our own eyes - and they can experience it, interact with it and share the moment in ways they've never been able to before.

While there's a lot more innovation to come in live-streaming, and virtual reality is the obvious next step towards developing that genuine shared experience, the potential of the medium is truly great. Perspective is something which can change the world, can facilitate greater understanding and can provide context beyond words and pictures alone.

And perspective is the true strength of live-streaming.

Understanding this may help you develop more intelligent and informed communication strategies using the option.