Trying to figure out the difference between social media and social networking is like trying to fully understand every ranking factor that Google uses for SEO: it's not easy. 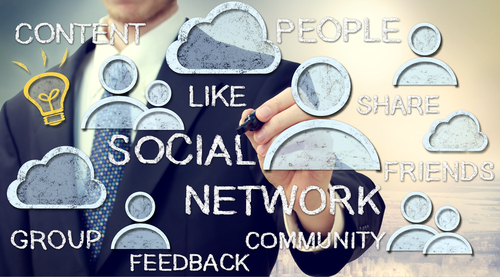 To really understand the difference between the two, we first need to define them. Merriam-Webster defines social media and social networking as the below:

Social Media: forms of electronic communication (as Web sites for social networking and microblogging) through which users create online communities to share information, ideas, personal messages, and other content (as videos).

Social Networking: the creation and maintenance of personal and business relationships especially online

With that said, let's take a look at the five biggest differences between social media and social networking.

On social media, you're doing all of the talking. You're publishing content-images, videos, eBooks, infographics, white papers, and more-and trying to generate engagement with your fans and followers, and ultimately hoping that they interact with your brand or take an action.

With social networking, there needs be a mix of both talking and listening. If you're joining groups and networks on social media and doing all of the talking-posting about your brand and tooting your own horn-you're not going to get the type of respect that you probably deserve, and you're likely going to miss out on some great opportunities because you're not listening.

To be great at social networking, you have to take the time to listen and engage with others.

Perhaps the biggest difference between social media and social networking is the goal that you're trying to achieve.

Social media differs because while you're certainly trying to generate buzz and interaction, you also want to increase your bottom line, and that means data acquisition for lead generation and sales for eCommerce.

Content is so important to every aspect of marketing, and while you need it for both social media and social networking, the type of content you use for each is going to be different.

In social networking, it's a lot of rich conversation and questions. You're having deep, informative conversations with people in hopes of sparking a connection and gaining a new fan or follower while growing your referral network.

On the social media side of things, you're trying to drive engagement, and you can't do that with 250 word Facebook posts. No, you need to be posting and sharing images, videos, infographics, and other meaningful pieces of content to keep your audience engaged and interested in your brand.

It's not to say that this type of content can't overlap, but how you use the content should be different.

If you're an active brand on social media, you're probably using a tool like Hootsuite or Sprout Social to help save time and measure the analytics behind your efforts. You can create your posts and schedule them out days ahead, and then sit back and watch the engagement that takes place.

With social networking, there's no automated way to really grow relationships, and you can't cut corners. Each interaction you have needs unique focus and attention.

Social networking is like dating-it's time consuming, and it takes a lot of time and effort to really make it work, but it's all worth it in the end.

In this digital age, we're all trying to measure the ROI from everything that we do, especially social media.

But since your social media strategy is about generating buzz and engagement, it's a bit difficult to nail down that type of return. Over a longer period of time, you should be able to attribute some type of success, but it's not going to be as clear as it is in your social networking game. Of course if you're driving things like sales and you have your tracking and analytics in place, it'll be easier to measure your ROI.

All in all, social media and social networking are two important marketing tactics, but they each come armed with their own unique challenges.