Late last year, Pinterest rolled out a new search function which enables users to search by content within an image.

It's a pretty handy, and cool addition to the Pinterest experience, and has been developed by the platform's relatively small design team, in comparison to how bigger players like Facebook and Google are developing their own advanced image recognition capabilities.

And now, as part of their ongoing efforts to convert the platform into a major eCommerce and online shopping destination, Pinterest's looking to advance the feature in order to make it easier to use and a more natural element in the on-platform search process.

According to a new post on the Pinterest Engineering blog, Pinterest is experimenting with a new form of "enhanced product recommendations by object recognition". In essence, it's Pinterest's search by image functionality re-packaged, with a red dot to appear on items within a Pin image (when you hover over the picture) prompting you to "Click on the red dot to see similar looks". 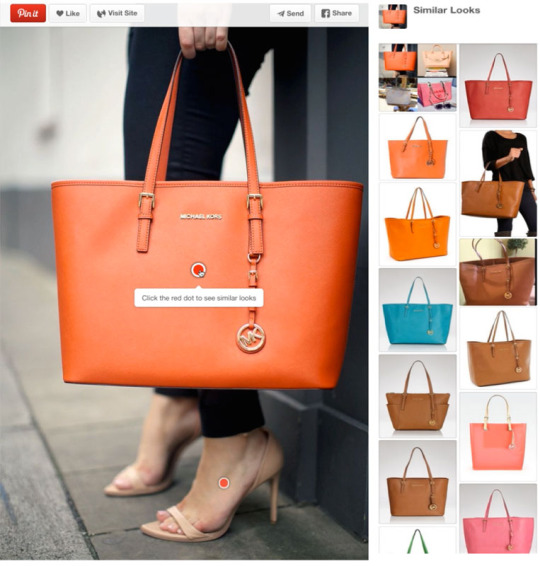 The system uses Pinterest's object recognition technology "to detect products such as bags, shoes and skirts from a Pin's image". Once detected, the system allocates the red dot - in testing, Pinterest's system has identified over 80 million 'clickable' objects from a subset of their Pin image base.

Pinterest recently launched the red dot system to a small percentage of live users to see how they responded to the option.

Pinterest's research team found that an average of 12% of users who viewed a pin with a dot clicked on it, and those users went on to click on an average 0.55 'Similar Look' results. 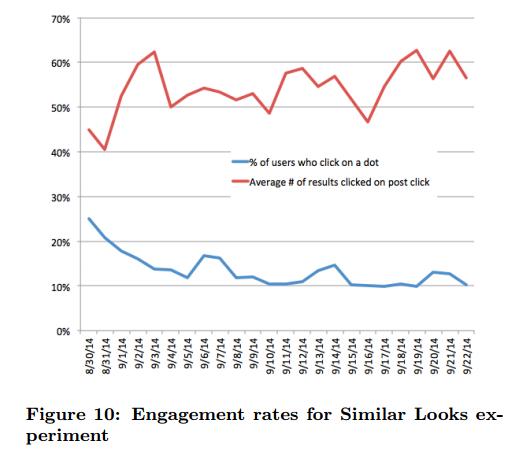 While the test data doesn't necessarily provide overwhelming evidence as to the potential utility of the red dot function, it's an interesting experiment nonetheless, underlining the ongoing efforts Pinterest's going to in order to improve their search process and turn their platform into a more shopper-friendly place to discover - and ideally purchase - new products.

As we've noted before, Pinterest is moving further away from being a 'social' network, as such, and more towards becoming an eCommerce platform. That focus makes sense - Pinterest's own stats show that 75% of saved Pins come from business boards, reinforcing that shopping and discovery is why most users come to the platform in the first place - but at the same time, Pinterest has set itself an ambitious task in terms of revenue generation and pushing social commerce.

Documents obtained by TechCrunch late last year showed that the social platform aims to be generating more than $2.8 billion in revenue by 2018, a huge leap for a company that made only $169 million in 2015. In order to make that happen, Pinterest needs to innovate and advance their on-platform buying options, particularly initiatives like 'Buyable Pins'. And that, in itself, could be more difficult than many had anticipated - just last week, Twitter scaled back their efforts at on-platform buying due to lack of interest from their user base. Of course, Pinterest users come to the platform with a different mindset than those who use Twitter, with purchase intent ranking much higher, but even so, Pinterest's going to need to make some significant moves to convert their 100 million monthly active users into such a lofty revenue target.

Innovations like product recognition search can only help promote further discovery activity on the platform - and if they can get it right, and streamline their on-platform buying process at the same time, such innovations will make Pinterest a much more appealing platform for retailers online.