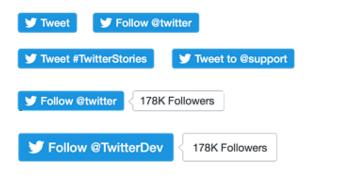 As flagged back in September, Twitter will this week switch off share counts on their tweet buttons, which are used as a social proof element by many publishers across the web (including Social Media Today). The decision sparked some pretty intense reactions across the socialsphere, with some even going so far as to create a hashtag to lobby Twitter to keep share counts active (#SaveOurShareCounts). So what's actually going to happen to your tweet buttons after November 20th, and why are Twitter doing this? And also, importantly, what are your options if you still want to use Twitter counts on yur website? Here are the details.

Twitter is making a change to how their tweet buttons work and are displayed. As of November 20th, 2015, the buttons will no longer display tweet counts - so they'll go from a variation of this:

There will be no automated way to display tweet counts in their traditional form through the use of Twitter's API.

Worth noting, some have questioned whether the tweet buttons will show a count of zero - no, they won't, as confirmed in this answer from Niall Kennedy, a Developer at Twitter:

"The Tweet button will not display a count of zero. The count component of the Tweet button will be removed in the new design. The JSON response currently used by the Tweet button to display counts will no longer function. If a script attempts to access the current or historical unofficial, unpublished endpoints for the Tweet button's count functionality the displayed count after a 404 HTTP response will depend on how the script handles failed requests and timeouts."

There are a couple of possible answers. In a blog post titled "Hard Decisions for a Sustainable Platform", Twitter's development team explained their logic behind the change, saying that they're moving to a new database system and that that new system, called 'Manhattan', won't support the share count API. Twitter explained that they could re-build this support function into the new system, but it would come at some cost, and therefore, Twitter's opted to no longer facilitate this option.

"The Tweet button counts the number of Tweets that have been Tweeted with the exact URL specified in the button. This count does not reflect the impact on Twitter of conversation about your content - it doesn't count replies, quote Tweets, variants of your URLs, nor does it reflect the fact that some people Tweeting these URLs might have many more followers than others."

As such, Twitter's effectively saying that they didn't see significant enough value in continuing to support this capability.

The alternate opinion, voiced by various social media commentators, is that Twitter's looking to generate more revenue for their data, and that providing any such insights for free somewhat undermines their offerings on this front.

This was touched upon in a recent post by Social Media Today CEO Robin Fray Carey - while Facebook and LinkedIn have worked to keep much of their data and insights locked up, and therefore of higher value for marketers and advertisers (e.g. you have to pay for Facebook ads to fully utilize their audience data depth), Twitter is in something of a losing position on this front. Because Twitter's emphasis is on public communication and adding your opinion to the global conversation, Twitter's data is, by design, freely available to anyone who wants to use it.

This has lead to a raft of third-party data and analytics providers using Twitter insights as a core component of their offerings - an entire industry in social listening has been built, in large part, on the back of Twitter data, and much of it without delivering any direct revenue back to Twitter itself.

As a result, the speculation is that Twitter may be looking to claw back some of this revenue by highlighting the value of its own data offerings. They've taken this approach with Twitter ads, introducing new tools to help advertisers find the signals amidst the noise of the tweet stream without having to refer to alternate analytics providers. With the removal of tweet counts, the only way to get equivalent data will be to use Twitter's data arm, Gnip, and once you visit Gnip for this purpose, that'll give Twitter the opportunity to showcase their data tools and offerings and underline the value of their analytics and insights, which could help them better monetize this element.

So what are your options?

With tweet counts gone, you effectively have four options or tools you can use to get similar data.

1. You can do nothing

A possible wrinkle in this plan is that some publishers will be able to continue displaying the full tweet counts and some won't - businesses who are signed up to Gnip will be able to continue to display share counts as normal, and will see no change after November 20th. If you're of the view that tweet counts provide a valuable, social-proof function, then this variance could be significant and that may be worth considering in your decision.

(Note: Social Media Today switched off share counts in anticipation of the change around three weeks ago and the variance in social share counts have not been significant at this stage)

"Share counts may still be available through other methods, including Gnip's full archive counts, share counts tracked by each site based on interactions with a share button, etc."

Companies that sign-up to Gnip will be able to display share counts as normal, which is perfect for those who can afford it. While Gnip doesn't list its actual prices on their website, reports suggest that Gnip access costs upwards of $3k per month, with additional data and tools added on top of that base access rate. That's pretty steep, especially for smaller, leaner organizations. Dependent on the response to the change, Twitter may look to introduce a cheaper alternative to cater specifically to those looking to display tweet counts only, but at this stage, Gnip is likely not an option for all businesses.

As noted in above quote, websites could also look to track share counts themselves, based on interactions with the share button on their site. Implementing your own tweet count system is a bit more technical and likely beyond the capabilities of most, but I'd imagine there are developers out there already constructing their own add-ons for this purpose, which they'll then make available to website owners at some stage.

In this sense, Twitter may actually just be creating another way for third-parties to profit from their data, rather than getting more people to pay them for it.

If you're able to implement your own solution in this regard, this seems to be the most cost-effective way to maintain Twitter counts in some form after the change comes into effect.

For personal use (and possibly business use also), BuzzSumo has created a new Chrome extension which shows the full share counts for any URL in one click. This is similar to the data Moz's 'MozBar' extension shows on share numbers, but Moz has confirmed that tweet share counts will no longer be displayed by MozBar after the 20th. The team at BuzzSumo have been working to implement a solution to display tweet counts after the change, and their new extension was built with this exact purpose in mind. It'll show the full tweet counts using BuzzSumo's aggregated data, which BuzzSumo is now accessing via Gnip. 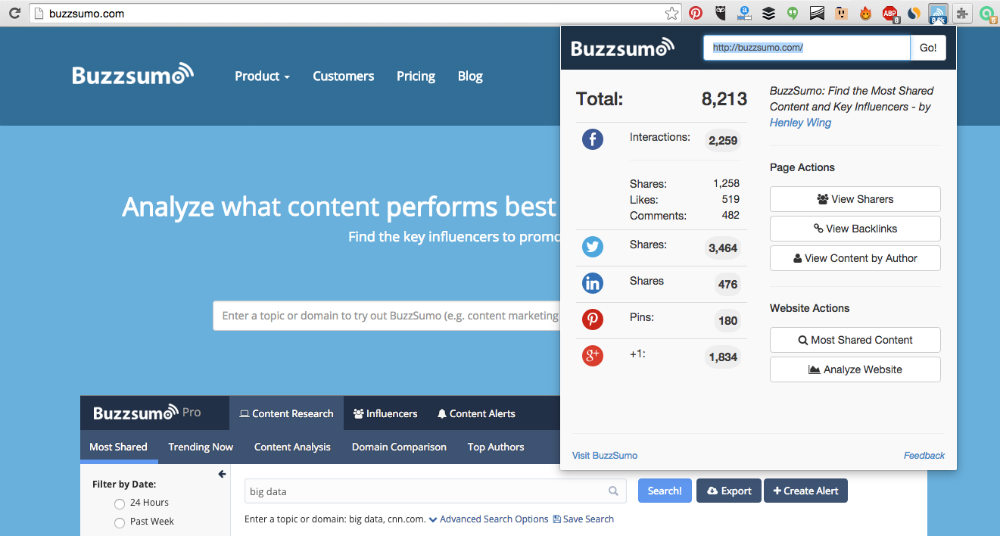 The one proviso worth noting in BuzzSumo's count is that due to the costs now associated with collecting Twitter share count numbers, BuzzSumo is restricting the frequency of their data updates.

"Our data shows that the majority of Twitter shares take place in the first three days after publication. Thus we will regularly update Twitter share counts during this period. After this period we will only update the Twitter share counts periodically. This means after the first three days of publication, our count may understate shares between updates. We are still working on the frequency of updates which will depend upon the popularity of the article on Twitter i.e. we will update popular articles with lots of shares more frequently."

You can download the BuzzSumo extension here - current tweet counts may be different from those displayed on websites because, as noted by Twitter, the current share count API is not always correct. Gnip data counts unique sharers, which is a more accurate reflection of actual Twitter sharing activity for each post - which means the numbers shown by the BuzzSumo extension will actually be more accurate than they were under the previous system.

As you can see, there are varying responses to the tweet count change - how you and your website respond will be influenced by how important you see tweet counts within your content distribution and reach strategy. Will not having tweet counts available prove to be a big deal? It's hard to say, but there's little denying the psychological power of consensus which comes from seeing others have given their support to something.

Depending on your situation, it may be worth waiting and seeing the impact - as noted, alternate tweet count tools might crop up in response to demand. But really, it's a case-by-case proposition. How much tweet counts matter will be relative to each individual website and business.