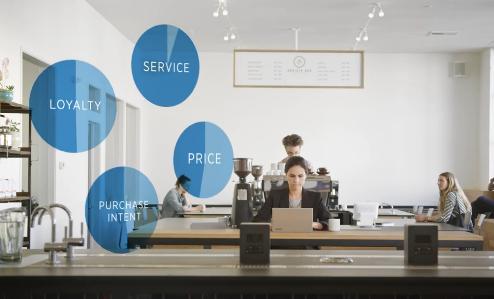 As part of Twitter's ongoing efforts to highlight the strengths and benefits of the platform to a wider audience, the micro-blog giant has today released a new audience analysis tool called 'Brand Hub'. Brand Hub takes Twitter's on-platform analytics to the next level, offering new insights into elements like share of voice, audience demographic profiles and additional detail into the 'what' and 'how' of people talking about your brand via tweet. And while much of this type of data's been available through third party sources for some time, this is the first time Twitter has incorporated such info into their own, free features - and given the information is coming direct from the Twitter itself, you can expect the data to be highly accurate, analyzing the full range of tweet conversations to add more context to your analytics. Here's how it works:

From the official release:

"Every day, millions of people Tweet about brands. Each Tweet has the potential to give advertisers new insights to better understand what customers, prospects, and influencers are saying, thinking, and feeling about their brand. To date, marketers haven't been able to gather these valuable insights in one place."

The addition of the Brand Hub aims to rectify this by offering three new analytics features, the first being a new metric called 'TrueVoice'.

"We've developed TrueVoice™, a new metric only available within Brand Hub to help advertisers track their share of conversation in real time. Share of conversation empowers marketers to learn more about the conversation happening about their brand on Twitter - in fact, research has shown that Tweets that mention brands have been linked to a direct increase in sales." 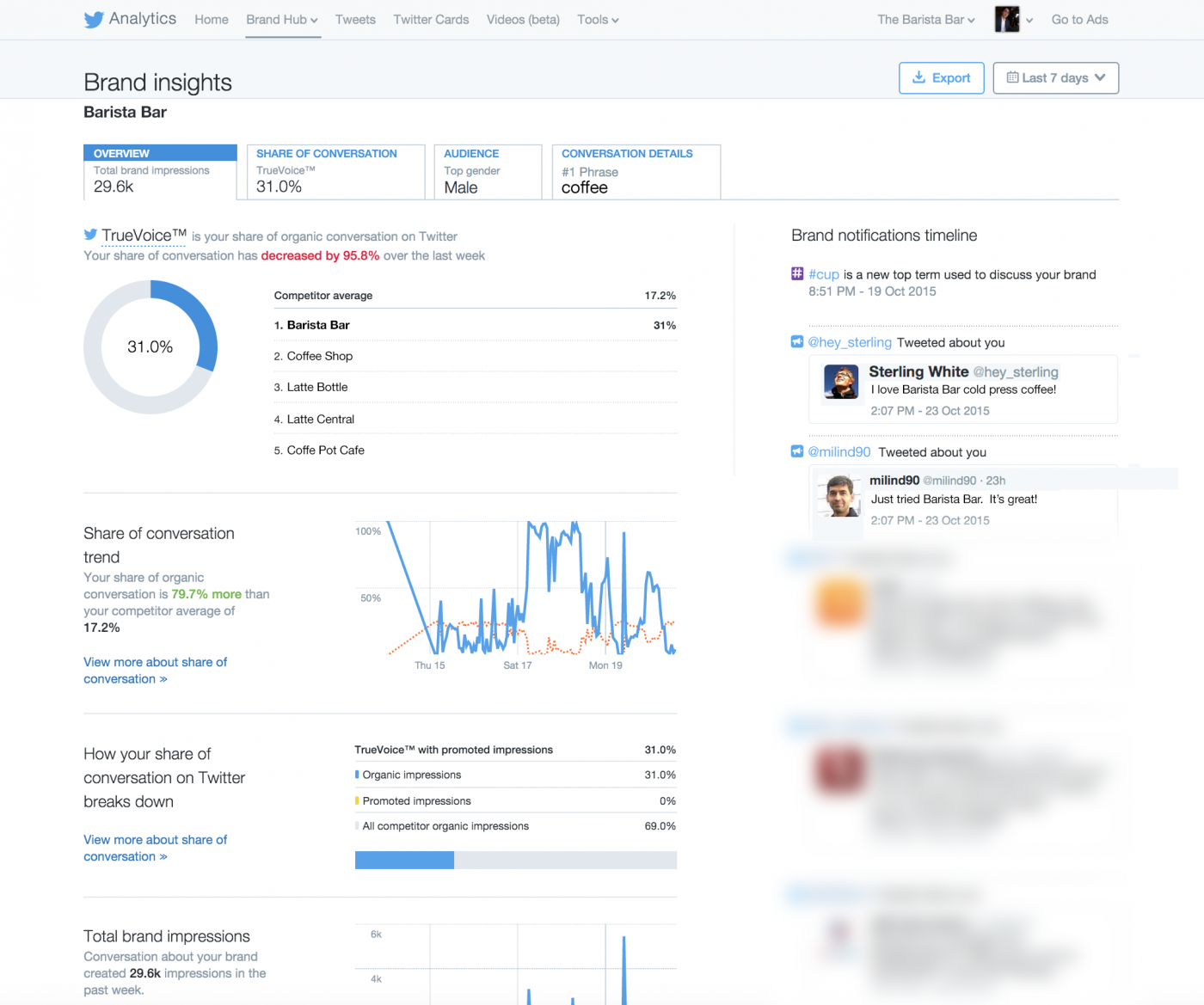 TrueVoice, as shown in the example above, aims to highlight how much of the related conversation your brand holds by comparing tweets about your business to those of your competitors - as you can see, Twitter highlights the brands identified as your competitors in the top listing next to a pie chart indicating total share (it's unclear from the initial info whether the comparison brands are identified by you or auto-generated by Twitter). The tool also gives you a pulse graph showing share of conversation over time, as well as a comparison of organic vs promoted impressions.

Interestingly, there's also a notifications tool on the right hand side of screen which highlights not only mentions, but also the common terms and hashtags that are being used to describe your brand - at the top of the listing, there's a notification saying "#cup is a new top term being used to discuss your brand". This is an interesting addition - it's one thing to know that your brand is being discussed, but it's in the how that the real value can be gained. Additional data notes like this could significantly help in this regard.

The next element of Brand Hub is 'Audience' which offers additional insights into how people are talking about your brand on the platform. 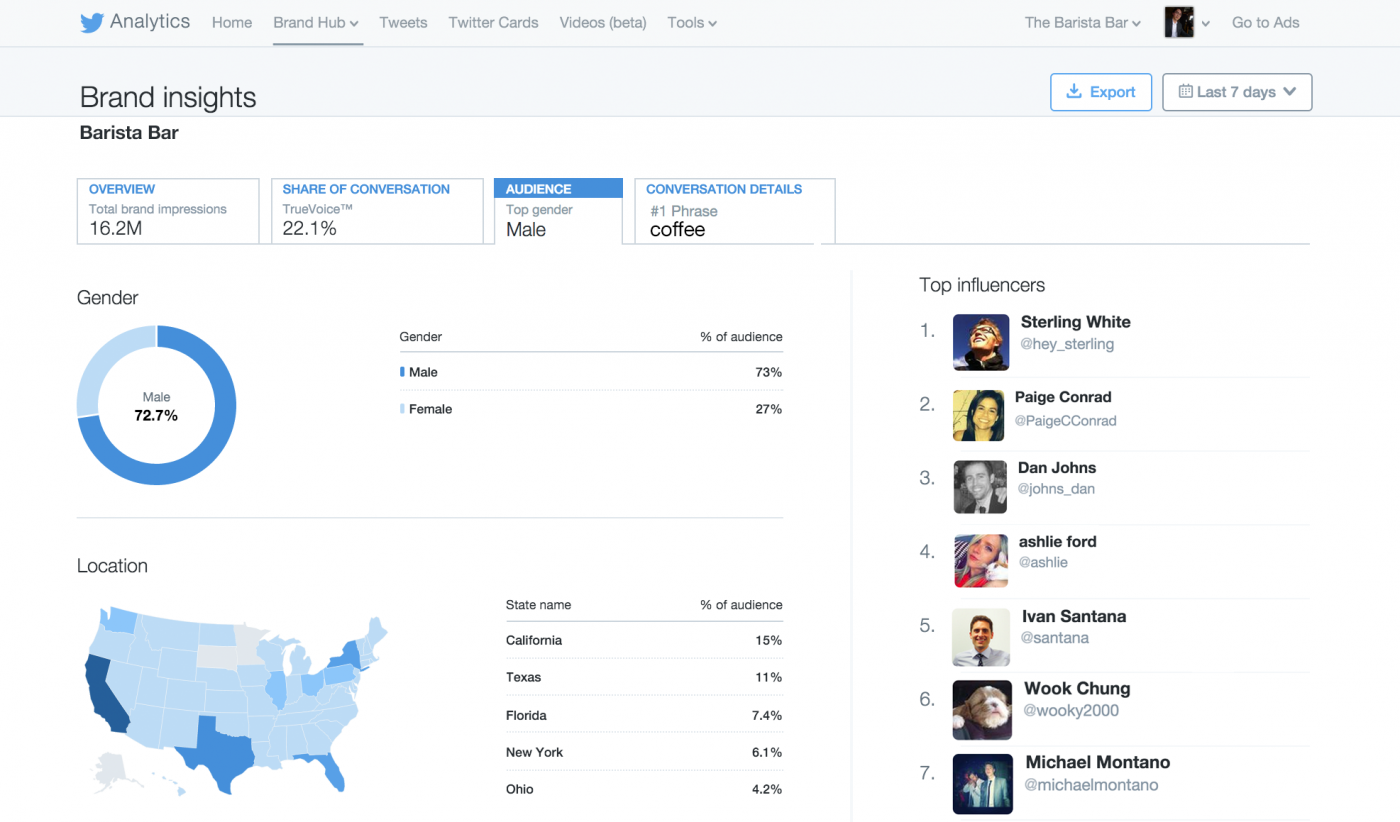 This tab provides more specific info on the demographic specifications of your Twitter audience, including gender, location, income levels and occupation types. The most interesting addition here is the right-hand column listing of influencers who are part of your Twitter community - the ability to locate influencers has been offered by third-party tools for some time, but it's interesting to see Twitter actively highlighting this data as an important means of understanding and amplifying reach of your brand message.

And the last element of Brand Hub is 'Conversation Details', a more in-depth look at the Twitter discussion about your brand. 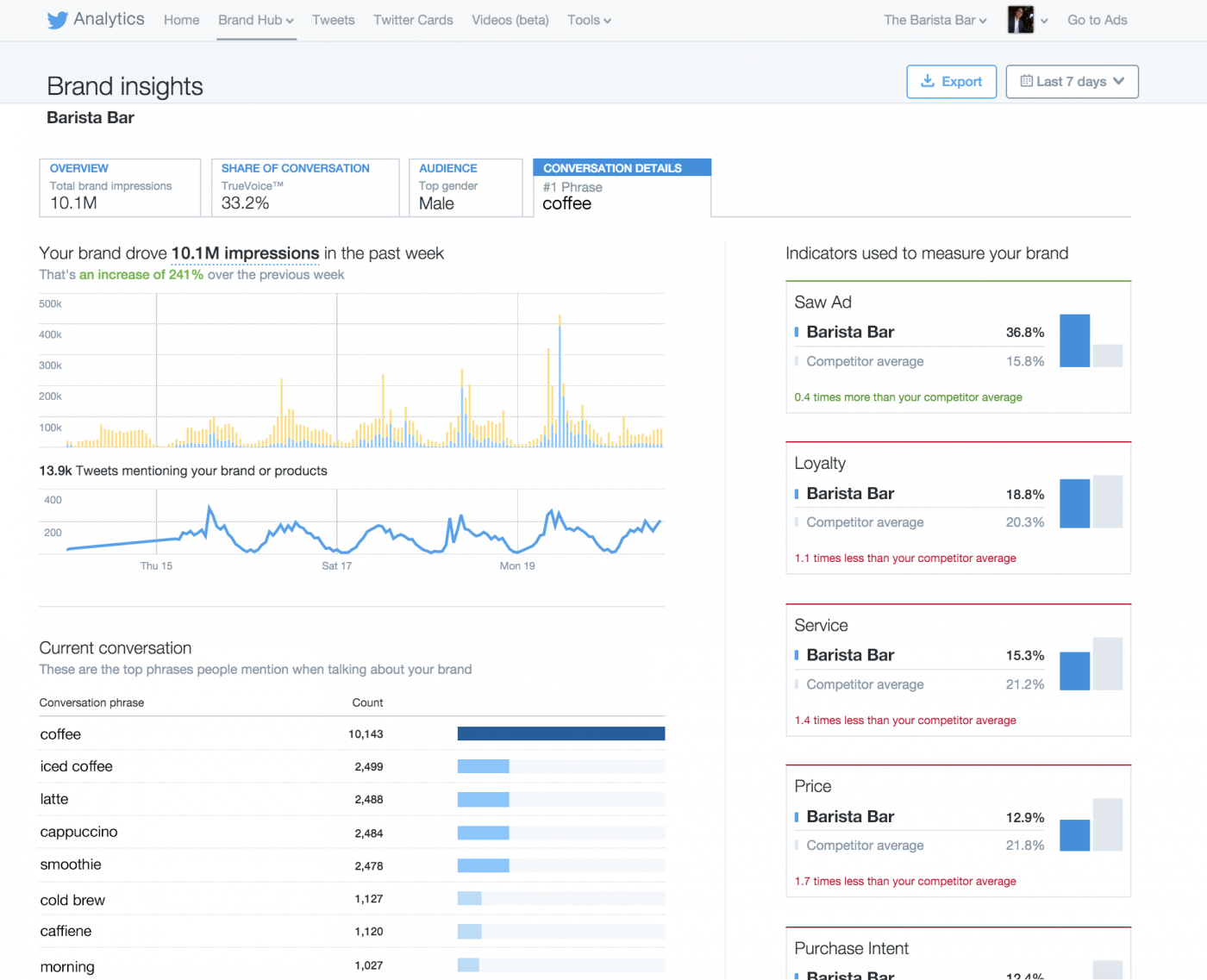 Conversation details highlights overall impressions and tweets mentioning your brand or products over time, as well as the common phrases used when discussing your offerings.

"You can also see breakouts on key topics such as brand loyalty, purchase intent, and more. If yours is a larger company with sub-brands, you can further segment your data by product or sub-brand."

There's also some interesting metrics on the right-hand side looking at ad reach, 'Loyalty', 'Service' and 'Price'. These also could provide significant value, though the calculations behind them will obviously play an important role in this respect.

One of Twitter's greatest challenges has been in communicating the platform's value. While we all know Twitter is the home of real-time discussion and insights, but the platform itself has never found a good way to frame that strength and highlight its unique market position - part of the problem, in this sense, is that Twitter has been somewhat hesitant to provide access to their data and the insights contained within for fear of devaluing their additional services like their ad targeting tools and enhanced data offerings, like Gnip. This approach seems, at least in some part, to have been behind the recent decision to remove tweet counts from website buttons - by removing the count, more people will be forced to use Gnip to get the same data, and once they visit Gnip, or their Twitter insights dashboard, Twitter will have the opportunity to show them additional data products they could use, which could provide Twitter's data revenue stream with a boost.

While Twitter's stance on their data makes perfect sense, the difficulty they have in this regard is that Twitter is designed to be an open platform, a public forum (or 'global town square', if you will) where people can go to add their thoughts and opinions on trending topics and real-time discussion. Whereas Facebook and LinkedIn are closed networks, keeping their data sealed within, Twitter's data is largely available already, which means rather than restricting access by making it harder for users to gather such tweet insights via their own offerings, Twitter's just fuelled a cottage industry of third party data providers, many of which are now very good at extracting and highlighting meaningful analysis, while providing little to no revenue back to Twitter itself. This puts Twitter in a difficult position - restricting access to their data is difficult, as the vast majority of tweets are freely accessible, while offering their own, free insights solutions to compete could de-value their offerings.

The addition of the Brand Hub is the latest in their efforts to capitalize on the audience insights they provide without giving away everything for free.

Will it pay off? Is this a strategy that will move Twitter more towards highlighting the value of their data and getting more users to use the platform more often? It's definitely a step in the right direction, though the fact that it's not being made available to all users (Brand Hub will only be made available to "select large brand advertisers and medium-sized businesses in English-speaking countries") again underlines the balancing act Twitter is walking between providing insight, yet restricting it at the same time.

Maybe, in the end, Twitter might be better off offering all the services available through third party tweet analytics providers for free, then using that as a jump-off point to upsell people onto their more advanced features. Users pay subscription rates for such services from third parties anyway, why wouldn't they do the same from the platform itself?