It's amazing to consider the vast array of tests and variations running on Facebook's platform at any given time. Every day there are new features being discovered, new elements being tried out, some of them will lead to new updates, while others will get dropped and disappear without a trace.

Take, for example, the platform's recent update of the News Feed layout - earlier this month, Facebook announced a range of smaller tweaks and changes to how the News Feed is presented which are designed to encourage more engagement. And while those changes are mostly subtle, the background insight into the amount of options they tried out in the development process is amazing.

Really, when you're dealing with more than 2 billion users, even the smallest change can have a huge effect - getting each monthly user to spend an extra second in-app would result in an equivalent increase of some 63 years in cumulative usage time. While the former is also true - get it wrong and user interest can drop significantly.

There's a lot riding on Facebook's tests. Which is what also makes them so fascinating to monitor.

Here are five new Facebook tests and updates from the past week which are worthy of note.

You've always been able to find colleagues and former school friends on Facebook, and The Social Network has tried several methods to make this easier over the years. Their latest option on this front provides a clickable link to defined lists of people from a certain workplace, or who attended a certain school.

This is what Facebook's NEW company employee / school student pages look like pic.twitter.com/D3UGrPRCvq

As you can see, you can now click on the relevant linked titles from your profile and you'll be shown a listing. You can then add colleagues and alumni as friends as you see fit.

The listing only works in the mobile app - clicking on the linked Pages on desktop simply takes you to those Pages - and it's unclear whether this is available to all, and/or how long it's been present (some say they've seen it for some time), but it adds another way to connect with relevant users, while also helping you keep track of who's listed as an employee on Facebook.

Not on Facebook-specifically, but Facebook-owned WhatsApp has also revealed its next step towards wider business use, with the introduction of verified profiles for businesses. 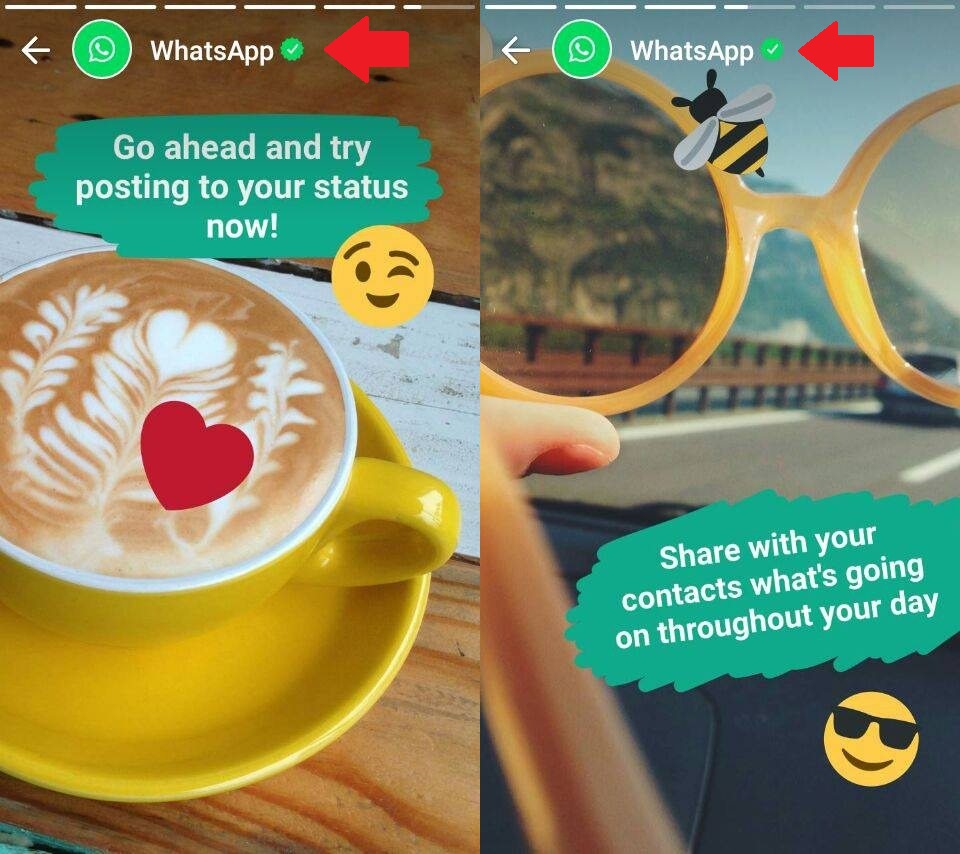 As you can see, verified WhatsApp profiles will soon have a green tick next to their name.

According to The Verge, the new badges will function in the same way as Facebook's grey verification badges for businesses do - you won't need to be a celebrity or high profile brand to qualify, necessarily, you'll simply need a business phone number and/or relevant contact info linked to your official account.

In addition, WhatsApp will also switch the text bubbles when engaging with brand pages to yellow, which will make it easier for users to know when they're communicating with a business.

WhatsApp, which now has more than a billion daily active users, is not as big a concern in western markets, but it's huge in a global sense, and will increasingly provide more international opportunities for those businesses who can utilize the platform to best effect.

At this stage, WhatsApp is on what Facebook would call 'the second phase' of its business development framework, and as those options develop, it'll be worth watching WhatsApp and keeping track of potential opportunities.

This is a particularly interesting one - while live-streaming has taken off and become a key digital marketing trend of the moment, one of the biggest problems with live-streaming, as an entertainment option, is that the quality is very hit and miss.

Sure, Facebook has their Live Map, through which you can connect to all the happening streams at any given time, but as anyone who's actually used the Live Map knows, there's a heap of junk.

This is the key issue that lead to the demise of Blab and Meerkat - while providing people with the capacity to live-stream anything and everything is great, in that it democratizes real-time video connection, it also highlights the fact that creating entertaining, engaging live content for an audience is hard. Very few can do it well.

Facebook's latest tool to counter this is a new 'Top Live' listing, which is now available to some users on iOS. 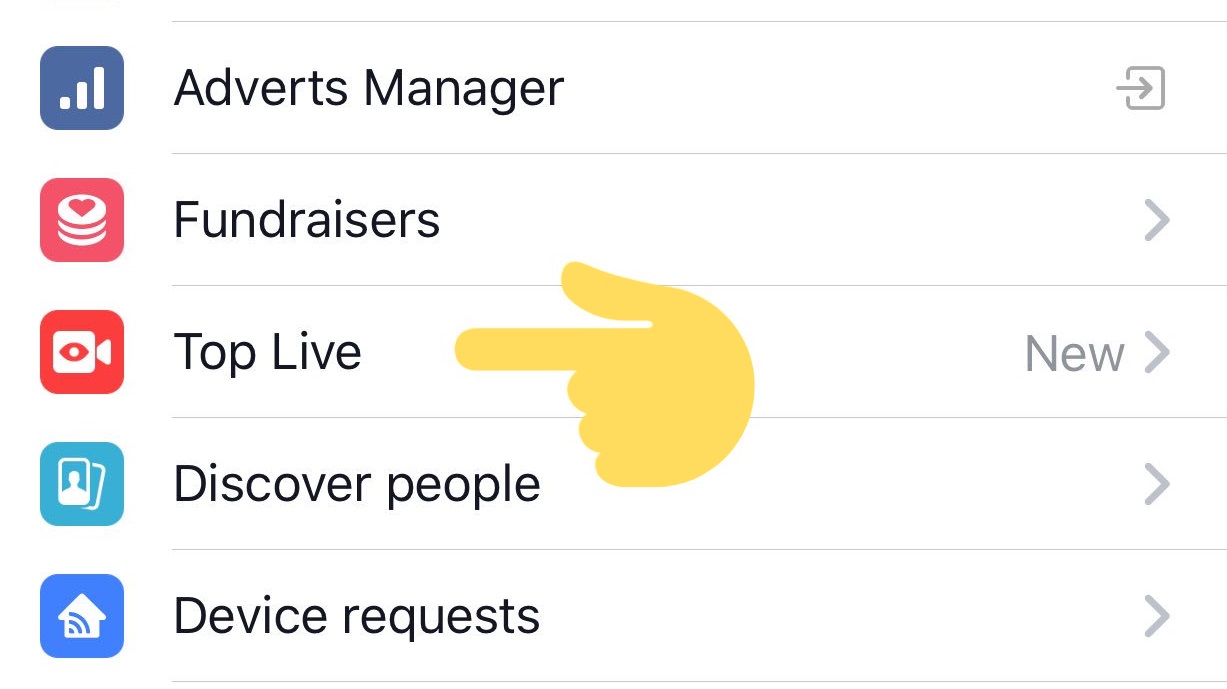 As you can see, the new option is listed in the functions menu - how, exactly, Facebook defines 'top' live content is not clear at this stage, but there may be a way for Facebook to use a combination of general audience signals combined with user preferences to give you a personally curated listing of good quality, in-progress, live content of most relevance to you, at any given time.

If they can perfect it, that would be a big step in advancing Live, and may become the default live content listing on a separate tab, or within the new Watch platform.

And speaking of Watch, Facebook has also revealed more information about their new TV shows which will start airing on their Watch platform this week.

As reported by Digiday, a range of new Facebook-exclusive programs will be made available shortly, including Business Insider's 'The Great Cheese Hunt', Attn's 'Health Hacks' (fronted by Jessica Alba), Hearst's ''Wiki What?' (in which celebrities review their own Wikipedia pages) and 'Ball in the Family', a new reality show focused on the life of the family of Lakers rookie Lonzo Ball.

These are just some of the 'hundreds' of new shows coming to Facebook, which, as explained by Digiday, will come in the form of short, 'snackable' style programming.

"Most of the shows Facebook is funding are described as "spotlight shows," with most episode lengths between four and 10 minutes. Facebook's paying $10,000 to $40,000 per episode for these types of shows."

Watch is Facebook's big bet, their big leap into original programming. Going on the rising trend of more people consuming video content online, and particularly via mobile device, as opposed to declining rates of TV viewership, Facebook's hoping to tap into those TV ad dollars by building their own alternative platform.

Of course, YouTube's doing much the same, and Amazon's also looking into more TV-like content deals, but Facebook, with its size and scale, has a significant attention advantage, which could best position it to win out, particularly if it can get its content mix right.

You might not think you'd bother watching TV-like content on Facebook, but if they start airing a show that becomes a 'must-see', you might change your mind. If Facebook can also make it even easier to view that content on home TV sets, it's not hard to imagine The Social Network will be able to take up more of your time, and attract more ad dollars as a result.

Definitely a key area to watch.

And the last interesting test seen 'in the wild' this week relates to a new button seen on some events pages prompting users to add an associated Camera Effect. 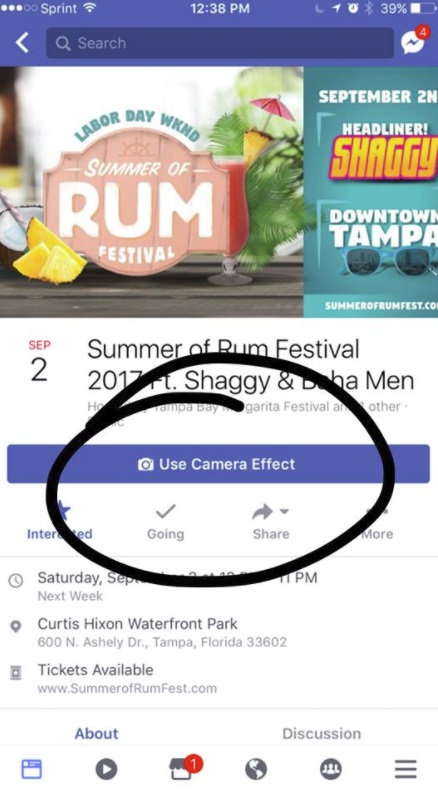 The suggestion here is that Facebook will be looking to push the use of their advancing video masks and tools as more of a promotional tool - which makes sense, and they're already doing so for big film houses.

But in this context, it seems more low-fi - events managers won't necessarily have the budget of film houses, but through the Camera Effects Platform, anyone could create an associated video mask or overlay, which can be a great way to prompt users to share user-generated content, and get involved in the event.

If Facebook can push more use of these tools, that could heap more pressure onto Snapchat, which has been the home of this type of promotion. If more events organizers are prompted to create their own visual promotion tools, that'll keep more people on Facebook using them, which a) keeps them away from Snapchat and b) enables Facebook to showcase just how good their effects are.

It's not clear how widespread this new button is, but it's an interesting test to consider.