No doubt you've seen them too - another popular one alerts you to where you can purchase Ray Ban sunglasses on sale. Of course, these weren't actually posted by my friends - these accounts have been hacked. To fix this, the account owner has to go through the process of changing their password, checking their account log-ins, remove suspicious apps, etc. But, of course, most people don't do all that. Most people just change their password, delete the offending post/s then move on - crisis averted. And that's generally okay, but you should really go through all the recommended steps in order to eliminate any chance that hackers could continue to mine your Facebook account for personal information, or even mine the accounts of your connections via your profile.

Facebook hacking is a commonplace activity - even big stars can fall victim to such attacks. Given this, Facebook's released an updated "Security Checkup" tool that will prompt all users to review and update their security settings to ensure they're aware of who's accessing their accounts and what apps they've given permission to utilize their information. The new system will also provide detail on how people can improve their passwords and password security.

"Security Checkup" will appear at the top of your News Feed. 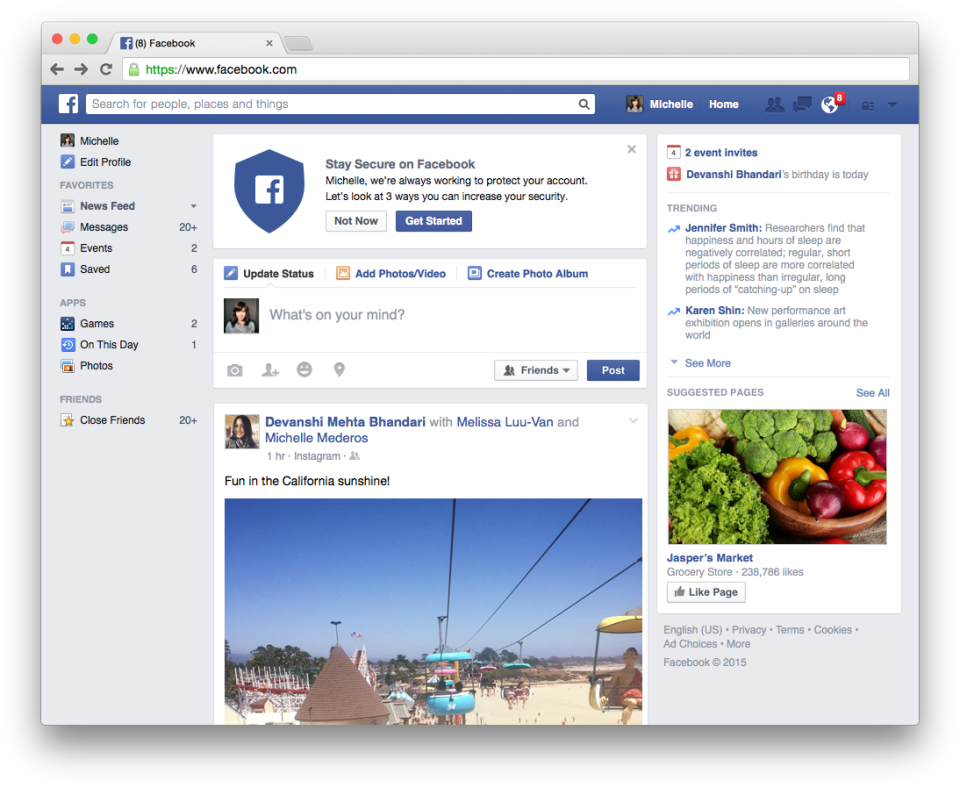 Once you click "Get Started", you'll be taken to a listing of all the devices and apps where you're currently logged-in to Facebook - you can remove any that you're not sure about. 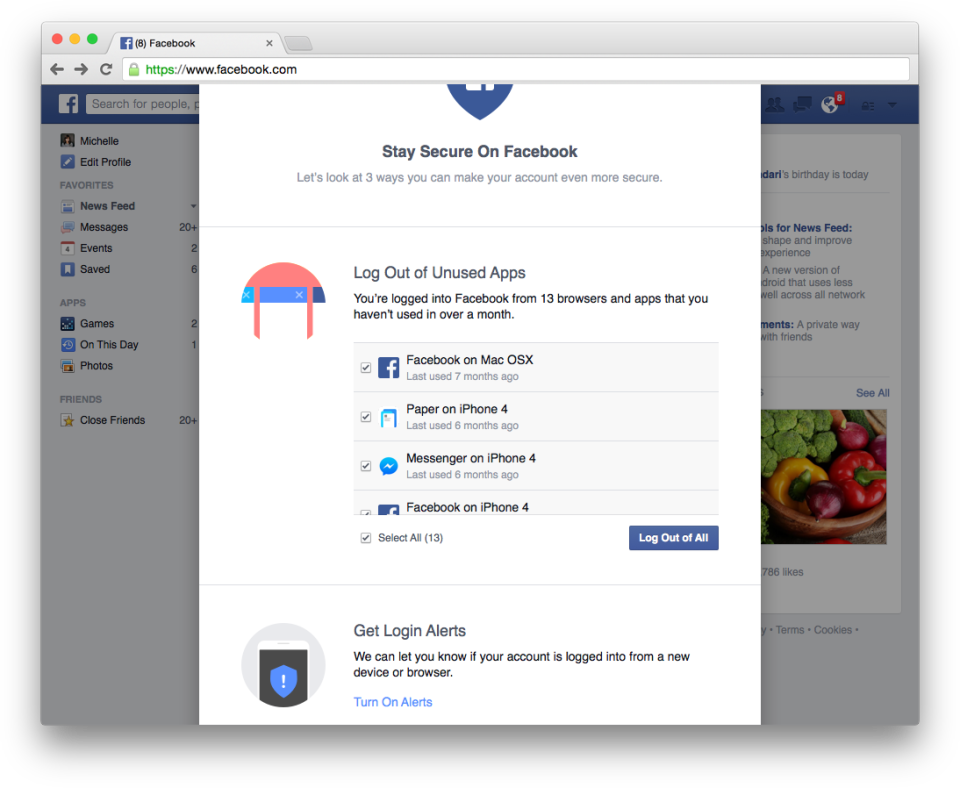 The next section is called "Login Alerts". Through "Login Alerts", users can set up notifications to let them know when anyone tries to log-in to their account from an unfamiliar device. Facebook already has an alert system of this type which recognizes unfamiliar activity, as noted in the above video:

"We already let you know if we see anything suspicious going on with your account. With "Login Alerts", you have an added layer of control"

"Login Alerts" enables you to be more specific about how such alerts are triggered - so if you only ever log-on using your phone and your desktop PC, you can set it so that anything outside of those two raises the alarm. 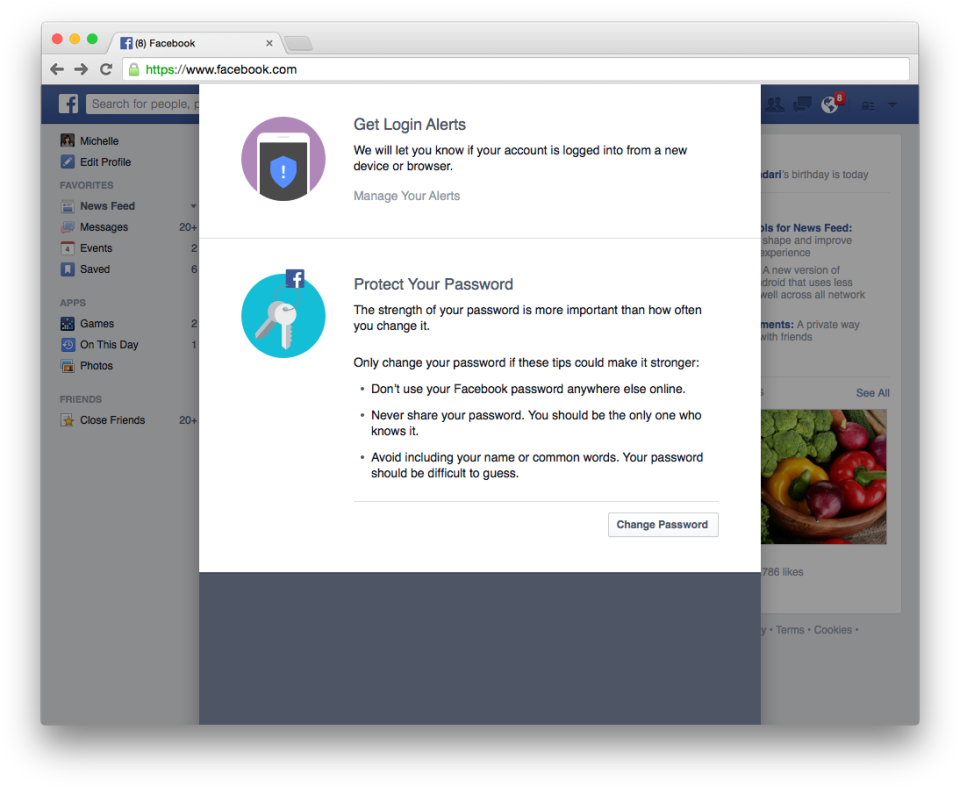 The three-step process is straight-forward and easy to implement, and should prompt more Facebook users to update their settings. It's yet another step Facebook is taking to reassure users that their information is secure, and that The Social Network is doing all it can to protect your privacy.

As social media adoption and usage continues to rise, data security remains one of the biggest concerns among users and user groups. A study by Pew Research in 2014 found that 80% of people who use social networking sites are concerned about how third parties access the data they share on these sites. According to US Department of Justice figures, more than 12 million Americans fall victim to identity fraud every year, with the financial loss attributed to such incidences doubling in value since 2010. Data security is a valid, and very real, concern for all social media users - Facebook's working to ease these concerns by providing actionable steps for people to take in order to protect themselves from such attacks.

While the possibility of falling victim to hacks will always exist, it's good to see Facebook working to educate and assist users, rather than letting them fend for themselves. Such prompts can only benefit Facebook - often even the perception of more user control is enough to improve general sentiment in this regard. Along with its efforts with the privacy dinosaur last year, Facebook is working to better inform and empower users to protect themselves against malicious activity online.