In a recent interview with Instagram CEO Kevin Systrom, Bloomberg reporter Emily Chang noted that they'd heard reports that Snapchat wants the bigger networks to be taking note of their growth.

But given their recent additions, and today's announcement, Facebook, in particular is clearly taking the threat of Snapchat very seriously.

"Now if you've taken more than five photos or videos in the last 24 hours and go to post a status, Facebook will suggest you create a Slideshow. It may also give you the option to "Try It" when viewing a friend's Slideshow."

An easy way to share the latest events and happenings in your life from the past 24 hours, like a 'story'. Sounds similar to something else, right?

Of course, Facebook's Slideshow option is a little different - and to be fair, the option has actually existed for some time with their Moments app, though this is the first time The Social Network has started pushing the tool into Facebook proper.

As you can see from the video, for each slideshow, you can add in photos and videos and select music and presentation options - theme filters include Nostalgic, Playful, Night Out, Birthday, Epic, Thankful, Tropical, Bollywood, and Amped.

And aside from the obvious Snapchat comparison, the option does work within the wider trend of video content. In a recent Q and A session, Facebook CEO Mark Zuckerberg noted that video was a logical evolution of social sharing - from mostly text in the early days of the medium, then to photos and now to video (Zuckerberg noted that VR will be the next iteration in that process). In this sense, all the major platforms are looking at ways to better facilitate more video content to work within trend - YouTube recently launched their new 'Director' app to help brands make better video content, for example, while Twitter's expanding their video option from 30 seconds to 140 seconds to provide more video options.

Now that they can, due to advanced in technology, people want to consume more video content, and as such, providing more ways for them to do so makes logical sense.

But the Snapchat factor also can't be ignored, particularly when you consider Facebook's reliance on user generated content.

Over time, Facebook has constructed one of the greatest - if not the greatest - audience insights and advertising tools in existence, all on the back of your personal data. Research has shown that your Facebook activity can reveal almost everything about you, from your interests to your habits - anything that researchers want to find out about people they can probably glean from Facebook, given the time and access.

That's what makes Facebook so incredibly powerful for brands. For example, using Facebook's advanced data tracking and targeting, you could get an understanding of not only the topics your audience is interested in, but their psychological leanings. You could work out, for example, whether your target market will respond better to emotional posts or straight sales pitches, whether and when they'll be seeking certain items based on their related conversational triggers, whether happiness or sadness leads to them looking your business up (and how you could use that to advantage).

Such insights enable far more intricate ad targeting and outreach, and that capacity to focus is the future of advertising. Right now, it can seem a bit intrusive to have online ads targeted at you based on your search and browsing behavior, because it's new, it's different to what we're used to. But for the next generation, this is completely normal - and more than that, they're growing to expect that brands will be reaching them based on their interests and behaviors, rather than sending them generic broadcast messaging.

In this context, you can see the value Facebook gains from your personal updates. Every post about your weekend, every update about your friends, everything you save to The Social Network helps build a more accurate and all encompassing view of who you are and what you're interested in. And they need that data flow to continue.

That's why recent reports that people are sharing fewer personal updates on the platform (one report suggests sharing of personal thoughts and photos is down some 21%) are so concerning for Zuck and Co., why Facebook sees Snapchat, in particular, as a significant threat. Because Snapchat's growing so fast among younger users, and has become, for many, the go-to platform to stay connected with friends, away from the glare of the family and extended connections you have on The Social Network. That's where all the personal updates are likely going - Facebook's even started polling their users to see if that is, in fact, the case. 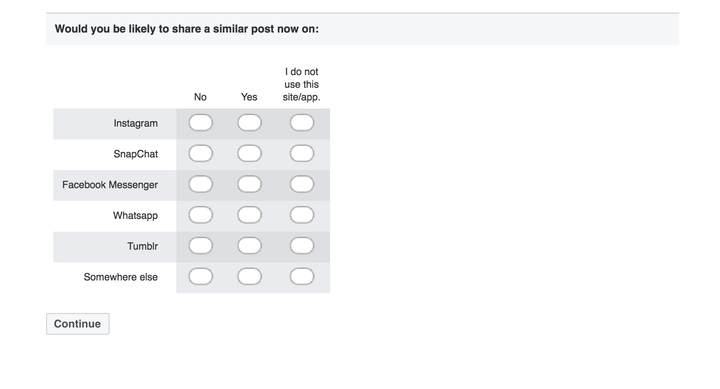 Notice how Snapchat's featured so prominently as an option (the corresponding question related to personal updates).

And, of course, those concerns make sense - Snapchat recently hit (reportedly) 150 million users per day, putting it behind only Facebook itself and Facebook-owned Instagram in daily active use. And Snapchat's growing fast - take a look at this chart from the recent comScore 'Cross Platform Future Focus' report on online trends. 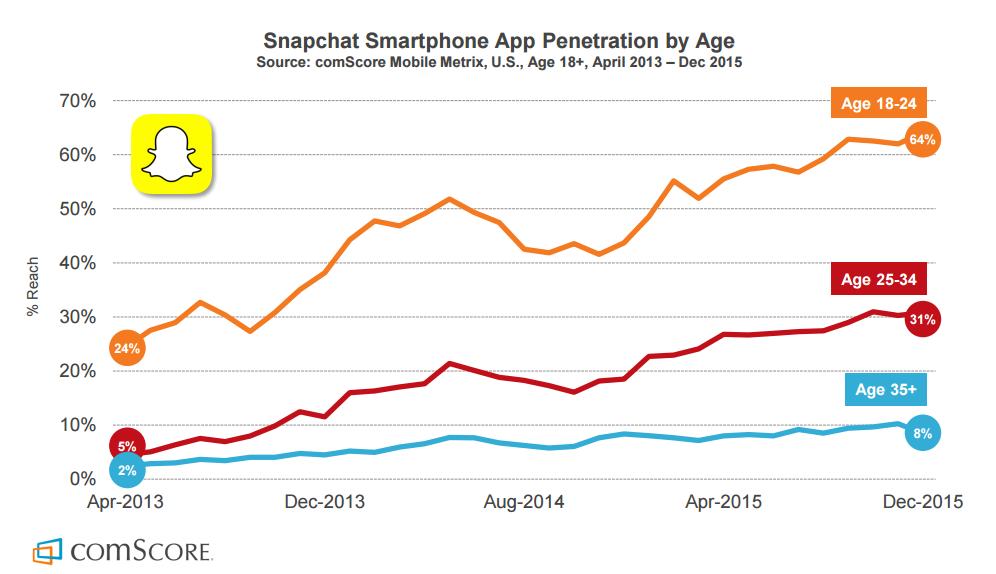 Given this, it's not surprising to see Facebook trying to emulate a Snapchat-like feature, in 'Stories' and put it into a Facebook context. But as with some of Facebook's other additions designed to claw their users back from Snapchat - like disappearing posts, photo stickers and video masks - they're actually playing catch up. Snapchat's winning with such additions largely because they're ahead of the game, they're innovating faster and releasing tools more aligned with their audience interests.

And while Facebook, in the long run, is likely to win out with bigger, high-tech features like virtual reality (though Snapchat may be looking at that too), and Facebook obviously remains the leading social network and is still growing it's audience and getting users to spend more time on platform - there's little threat that Facebook's going away any time soon.

While that's all true, The Social Network is still very clearly concerned about the potential threat Snapchat poses, and as such, you can expect to see Facebook adding more Snapchat-like features like this over time, and to be putting more efforts into measures designed to get Facebook users sharing more content on their network, as opposed to switching to somewhere else.

Slideshow will be coming to Facebook's iOS app this week.