Twitter's focus on live-streaming, and their increased adoption of machine learning models to show users the most relevant tweets, appears to be paying off, with the company posting a better than expected Q1 result - and most notably, adding nine million new monthly active users. 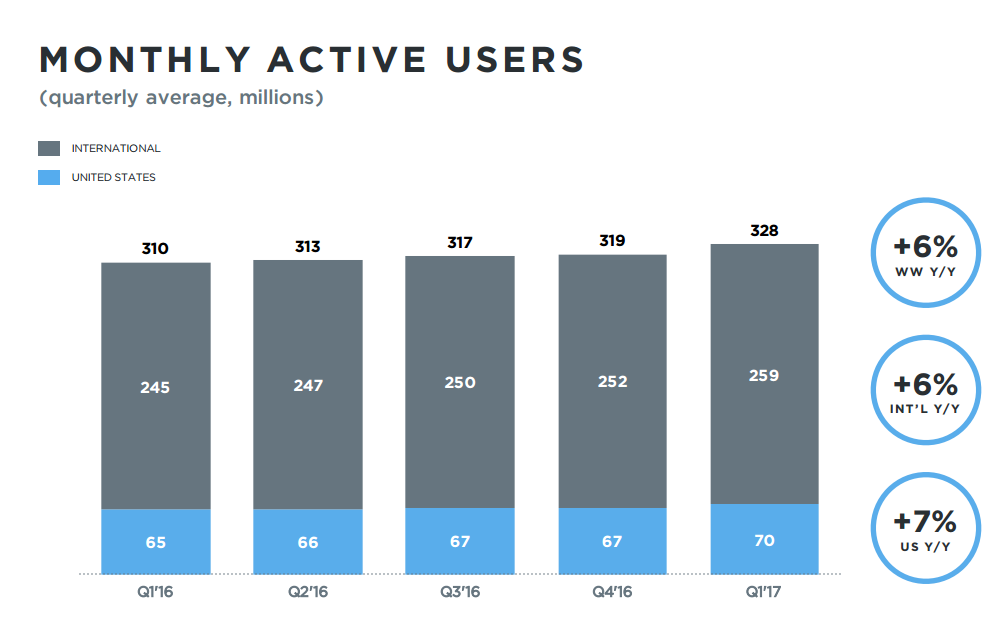 The growth in users also extended to daily actives, which increased 14% year-over-year, which is the fourth consecutive quarter of accelerating usage growth. 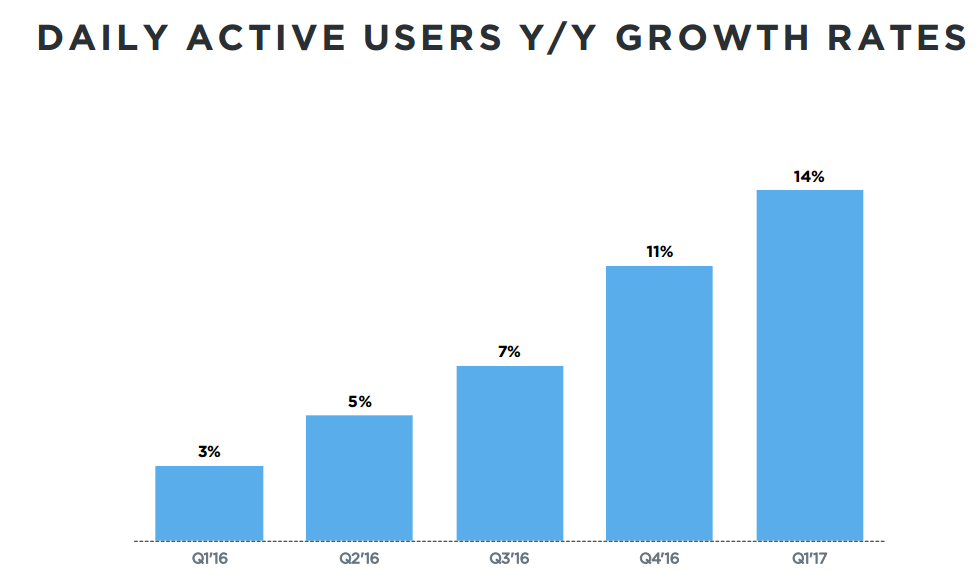 The increases may seem small in comparison to Facebook - which added 72 million new MAU as of their last quarterly report (taking them to 1.86 billion) - but growth is still growth, and it shows that while Twitter's appeal may be more niche, there's still clear value in the platform. Twitter shares rose 12% following the earnings announcement.

Twitter credits the accelerated growth to their refined focus on their core use case as 'the best and fastest place to see what's happening in the world' and their increased adoption of machine learning to uncover the most relevant tweet content to each user.

Twitter's been tweaking their timeline algorithm over time, and while the effect may not be as obvious as Facebook's infamous News Feed, there have been various changes to elements of your tweet display - you might see a tweet which has been liked by someone you're connected with, for example, or the order will be out of chronology - there are various shifts in what tweets you're now seeing. The numbers once again show that algorithms, despite user opposition to them, do work.

Twitter also makes specific note of the adoption of their new Explore tab, which replaced Moments in the app back in January, saying that approximately 40% of DAUs visit the Explore tab on average per day, and 60% of them return again the next day. On one hand, the replacement of Moments seemed like a concession that Moments had failed to live up to expectation, but the usage numbers for Explore justify the change. If they can now make Explore a key reference point - a home for happening live-streams, most importantly, it could become a key step forward for user engagement.

On live-streaming, Twitter streamed more than 800 hours of live video in Q1, covering more than 450 events - and reaching 45 million unique viewers, up 31% from Q4'16.

Twitter has hitched their wagon to the growth of live-streaming - just this week, Twitter COO Anthony Noto told BuzzFeed that the platform plans to be streaming live video 24 hours a day, 7 days a week inside its apps and desktop site. And while they may have lost their flagship NFL deal to Amazon, Twitter's focus now seems to be on smaller, more niche events, enabling increased advertiser focus.

For example, their recent coverage of the Halo World Championships brought in 10 million viewers, which pales in comparison to the cumulative millions who tuned in for their NFL matches. But that audience is very specific - if you're a brand trying to reach a passionate group of gamers, Twitter suddenly becomes the place to be. If Twitter can provide that same opportunity at scale, it could deliver significant results. On this, Twitter also notes that they've signed deals with ESL and DreamHack, Mainichi Shimbun, France Télévisions, Sky Sports, Time Inc., Billboard, IMDb, Condé Nast, and GLAAD.

"The breadth and diversity of our content continues to meet the passionate interests of our audience and also offers a competitive advantage in our conversations with advertisers."

Also interesting, we got some Periscope numbers:

"In Q1, we streamed 77 million hours of live user-generated video through Periscope. We also made a number of product improvements."

Periscope usage data has been fairly limited since the height of their battle with Meerkat, and while we don't have directly comparable numbers from Facebook on Facebook Live usage (Facebook says that 'millions' of people use Facebook Live), it wouldn't be surprising to see Zuck and Co release such figures in response, now that we have an actual usage figure from Periscope. 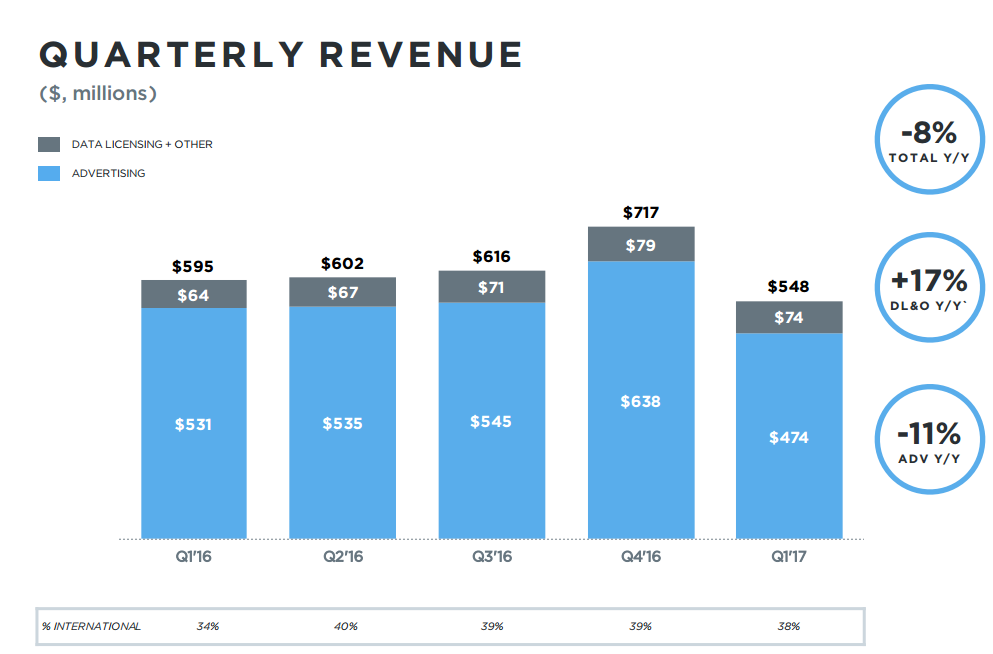 Despite the result - which was somewhat expected given the platform's perceived slow down in usage (market expectation was $512 million) - Twitter says they're increasing ad value, with a more than 60% year-over-year improvement in cost per ad engagement, again pointing to that refined ad focus as opposed to pure broad reach (which they can't compete with Facebook on). Twitter says they've continued to simplify their product portfolio and apply machine learning techniques to their ad options, which has seen them produce higher ROI for advertisers and double digit increases in ad engagement rates.

Video remained the platform's best-performing ad format, and they recently announced mid-roll video ads to extend their options on this front.

And the last key note of focus in Twitter's Q1 result is their continued push to make the platform safer - Twitter has introduced a range of new safety measures of late, including more tools to enable users to control what content they see (like the ability to mute keywords or accounts), increased efforts to stop the creation of abusive accounts and improved reporting procedures, making it easier to take action in such cases.

Thus far, Twitter says those efforts appear to be paying off.

As a result, we're seeing less abuse reported across the service. #TWTR

Overall, it's a positive report card for Twitter. While revenue is down, as noted, that was largely expected, and the continued growth of their user base bodes well for future potential, as does their widening focus on enhanced video opportunities. It's not amazing, of course, Twitter still has a way to go to get back on track, but the data shows that they are making the right moves.

They might be doing it slower than some would like, but they do appear to be moving in the right direction.