By
TJ Welsh VP of Marketing

Building an active and engaged following on social media is no easy feat, especially with the ever-evolving algorithms on Facebook, Instagram and the like, making it increasingly difficult for marketers and businesses to reach customers organically through social networks.

Long gone are the days when a business could post a few updates a day, or week, and garner considerable web traffic and post engagement - the slow decline of organic reach, which began as early as 2014, has continuously restricted post exposure. And with more and more algorithms and algorithm refinements coming through regularly, this is now the new norm. You either work with the systems to maximize performance, or you watch your social referral traffic continue to decline at a steady rate.

So how can you work with the algorithms - what are the things you can do to ensure that you get the best performance on social platforms, despite ongoing distribution shifts?

In this post, we’ll take a look at the ways social media algorithms have changed the way businesses need to post, and look at some tried-and-true content ideas you can use to create a diverse, valuable social media feed that continues to drive engagement and traffic to your site.

In order to create a diverse social media feed that'll actually get seen, you need to first have an understanding of the basics of how platform algorithms work, so you can adjust your strategy accordingly.

Here are some insights into what we know about the various algorithms at play.

Earlier this year, Facebook’s algorithm was given a significant update which aimed to reinforce the platform's commitment to facilitating meaningful communication between friends and family.

“You’ll see less public content like posts from businesses, brands, and media,” Mark Zuckerberg announced this year. “The public content you see more will be held to the same standard - it should encourage meaningful interactions between people.”

Essentially, Facebook prioritizes content that it deems "relevant, valuable, and interesting" to users, with general engagement - and now “meaningful interactions” - as drivers. 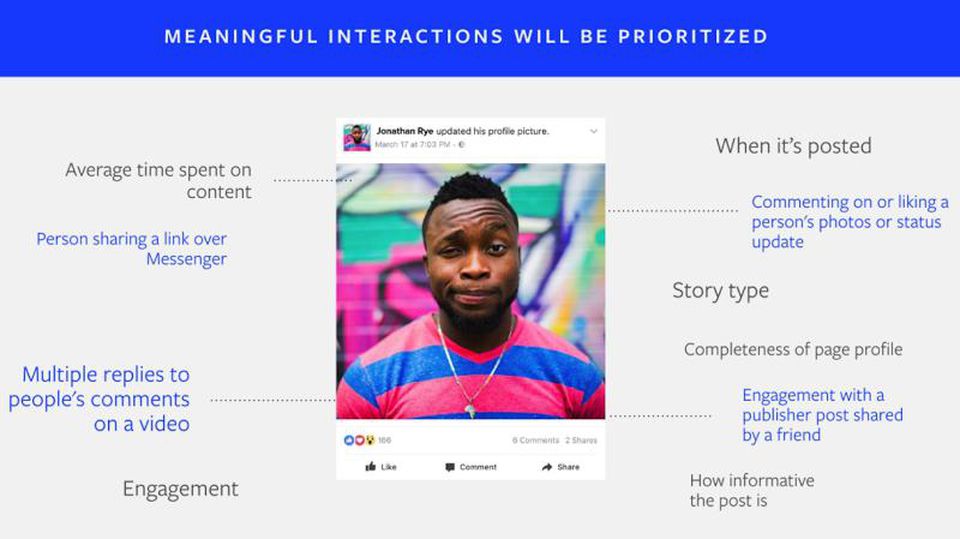 Facebook considers shares and comments to be “active” engagements, which means the more your posts inspire discussion, the more Facebook will consider them "meaningful", and thus, prioritize them in feeds.

Instagram is Facebook-owned, and as such, it’s fairly safe to assume its algorithm is pretty similar to Facebook’s.

As a photo-based, mobile-first platform, Instagram has said it prioritizes the following factors:

Twitter paints itself as a much more real-time, in-the-moment social media feed - which is why the platform saw such significant pushback when it switched to an algorithm.

Since making the switch, Twitter has been working to balance crucial timeliness with serving the most-relevant content to its users.

Now that we have a better understanding of the key elements each platform is looking to enhance, let's now look at some proven ways to boost the performance of your posts, in accordance with algorithm sorting.

Video content hardly qualifies as “out-of-the-box” suggestion here, but we’re including it because it can be an extremely powerful way to reach people organically on social media.

Research shows that natively uploaded Facebook videos (videos uploaded through the platform, rather than by posting a link) have a 186% higher engagement rate, and are shared 1000% more than videos linked from other hosting sites.

At the least, it's definitely worth experimenting with posting native video content.

Mondays aren't so bad when they start with a #PumpkinSpice Latte. #MondayMotivation pic.twitter.com/0vTD2pJmj9

We all know that videos earn exponentially more engagement than their photo and text counterparts, but producing elaborate, long videos can be out of reach for some brands.

Short video clips like the above one from Krispy Kreme can be shot and edited in seconds, earning more shares and views than a photo while still being relatively easy to produce. 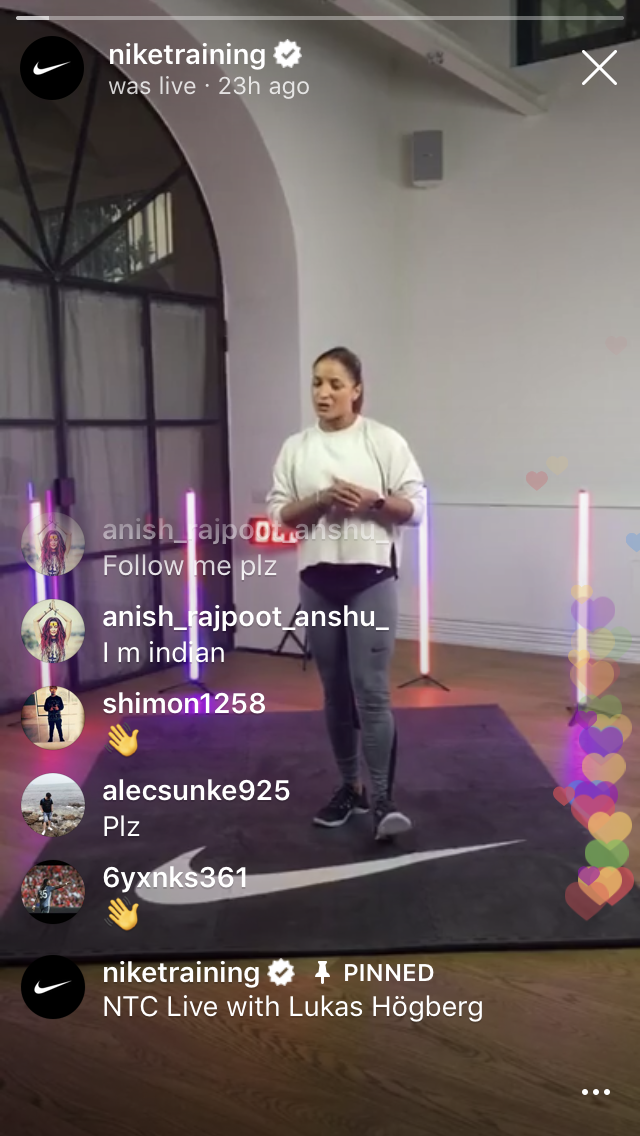 Live social media broadcasts are watched 3x longer than regular videos, making them an awesome way to reach your followers in an authentic way.

You should look to run your live feed for an extended period of time (10 minutes as opposed to 2, for example), so that people have time to tune in while you’re still live. Live videos can be great for sharing behind-the-scenes content, highlighting new products, or answering questions straight from the customers mouths.

Businesses who don’t have the resources to film video content can still make engaging social media videos by using a combination of photos and text.

Given that 85% of social video content is watched without sound, text-heavy videos can actually grab attention and perform very well.

What's more, Facebook recently launched a tool which makes it easy to use your still image assets to create video content.

You can use a service like BeLive to host live, split-screen interviews on social media, or native split-screen features which are available on both Facebook and Instagram.

Through this option, you can interview interesting people, and broadcast the feed live for your followers to tune in.

GIFs are bite-sized video files, most typically pulled from television and film content, and often used on social media to portray a certain emotion or relatable experience.

GIF content is highly-shareable and requires little-to-no effort on the part of the brand. In fact, Facebook and Twitter both now have a built-in “gif” keyboards when you post, making it easier than ever to search and select funny, relatable, shareable gifs:

The only thing better than a Frosty and fries is when the small Frosty is only 50¢. pic.twitter.com/lycrMMLe3t

You can share pre-made GIFs through your gif keyboard, or create your own GIFs using branded content.

A step up from GIFs, memes are typically a photo or GIF with text attached, meant to convey a relatable emotion or experience. 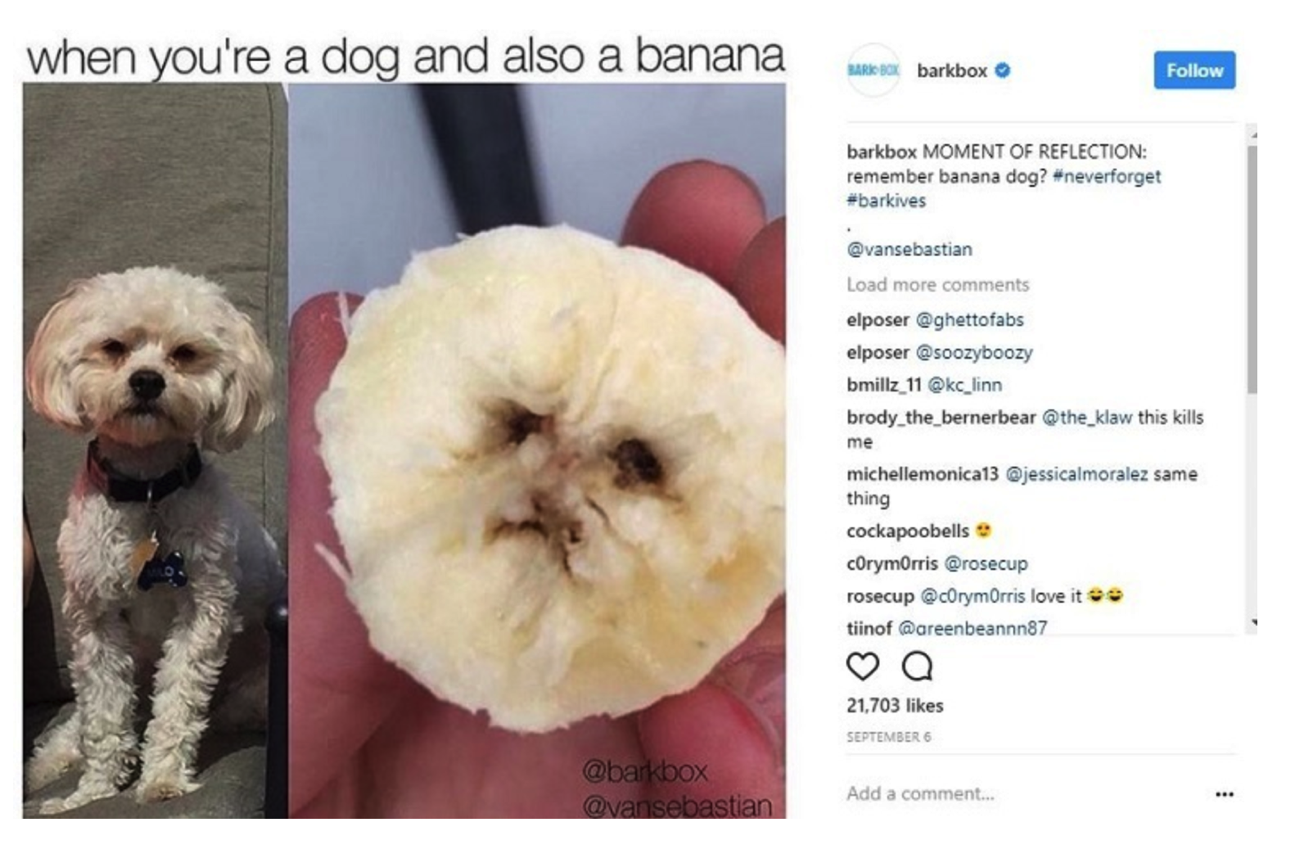 Meme marketing can even help brands create viral content: When Heinz made a meme asking if tomatoes were fruits or vegetables, they received over 4 million impressions, and saw a combined 80,000 engagements on Instagram and Facebook.

When your roommate eats all the Ruffles. pic.twitter.com/vyKnZKUmVW

From photos, videos, GIFs, memes, and even text-based posts, you can highlight, retweet, repost, and reblog when users create content about your brand.

Whether they do it of their own accord, or you put out a call for UGC through a post, contest, or giveaway, the content can freshen up your social media calendar and provide you with new marketing assets.

From holidays to film and TV releases, you can (and should) create social media content relevant to specific topical events and moments.

Here’s a funny example of when Arbys took note of the much-anticipated Season 2 of Netflix’s “Stranger Things”:

People love sharing their opinions, so Facebook polls, Twitter Polls, and Polls in Instagram Stories can be great ways to generate quick engagement from your followers.

Ask a question and see the clicks rolls in.

Question for the 15,000 guests staying with Airbnb in the Bay Area this weekend: What’s on your must-see list?

Earning engagement means being engaged - and a great way to do that is to actually respond to people who engage with you on social media.

Companies can explore creative ways to respond to users beyond the simple text reply - look at what Target did in this response:

Another easy way to get more eyes on your account organically is to ask people who already follow you to tag their friends, organically driving more people to the post.

Just a little reminder for you this Thursday.???????? Tag the goddesses in your life.

With a little creativity, some fun, and a healthy dose of planning, you can create a robust social content calendar with diverse, engagement-friendly content designed to work with the algorithms.

Hopefully these tips and examples get you thinking on how you can maximize your performance.