Meta Moves to Next Stage of Full Messaging Encryption, With Expanded E2E on Messenger

Despite ongoing concerns from various authorities, Meta’s pushing ahead with its full messaging encryption plan, which is part of its broader process to integrate its messaging tools, and enable users to engage in DM chats across Messenger, Instagram Direct, and WhatsApp from any of the three apps. 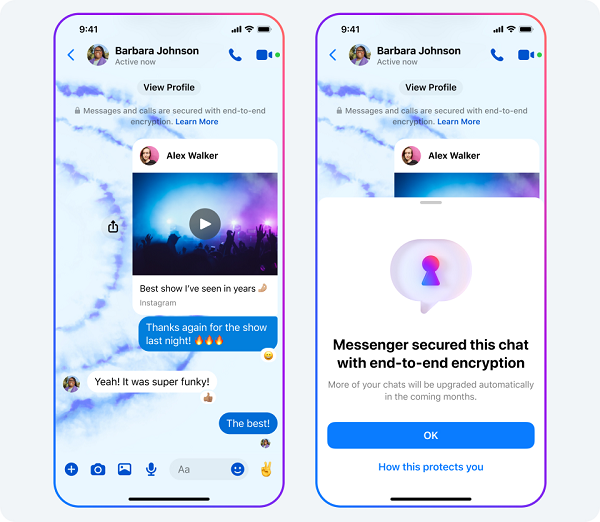 As you can see in this example, some users will soon see their Messenger chats migrated to full encryption – whether they want that or not.

“We will notify people in individual chat threads as they are upgraded. We know people will have questions about how we select and upgrade individual threads, so we wanted to make clear that this is a random process. It’s designed to be random so that there isn’t a negative impact on our infrastructure and people’s chat experience. This also ensures our new end-to-end encrypted threads continue to give people the fast, reliable and rich experience on Messenger.”

As noted, Meta first started testing end-to-end encryption within Messenger last January, with encryption in group chats. This is the next stage in Meta’s multi-part process to fully integrate its messaging tools, which it kicked off back in 2019, and will provide more security and privacy for users, while also, as noted, enabling cross-platform functionality within its messaging process.

But opponents say that this will also offer more protection for criminals, by providing another means for them to hide activity from law enforcement, with full encryption ensuring that no one, not even Meta itself, has insight into the exchanges occurring on its servers.

Back in September, then UK Home Affairs Secretary Priti Patel called on Meta to reconsider its plans for expanded messaging encryption, as it could impede the ability of police to investigate and prevent child abuse. Patel labeled the shift to full encryption as ‘catastrophic’.

Meta’s own stats on the detection and removal of child abuse material reinforce this concern - throughout 2021, Meta found and reported 22 million pieces of child abuse imagery to the National Centre for Missing and Exploited Children (NCMEC). In 2020, NCMEC also reported that Facebook was responsible for 94% of the 69 million child sex abuse images reported by US technology companies.

Clearly, there is means for concern here, with the switch to full encryption likely to disguise most, if not all of this activity, making it virtually impossible to detect. Such concerns have already forced Meta to delay its full encryption roll-out, but at the same time, counter-research has also suggested that messaging encryption can actually strengthen online safety for children “by reducing their exposure to threats such as blackmail, while also allowing businesses to share information securely”.

There’s no definitive correct answer, but the concerns around the protection of criminal activity remain, and many advocates will not be happy to see Meta continuing to advance on this front.

Another potential motivation for Meta’s push is that by integrating its messaging back-end, that then further welds Meta’s various tools together, which would make it harder to split the company up, if it were to come under more antitrust scrutiny in future. The FTC is still pursuing Meta over its acquisitions of Instagram and WhatsApp, with the threat of a potential forced break-up still looming. That, increasingly, seems unlikely, but if all of its messaging tools are integrated into a single framework, that would make this even more difficult to implement, which would help to solidify Meta against any such ruling.

In any event, Meta’s continuing to move ahead with the program, which will see more of your messaging chats shifted to E2E encryption over time.

Whether that’s a good or a bad thing comes down to your personal perspective.

In addition to this, Meta’s also adding some elements to Messenger, including new chat themes to help personalize your conversations, custom chat emojis and reactions, group profile photos, link previews, and active status, which will highlight when users are available in the app.

These are smaller, tweaks and dressings, but the real shift is the continuing advance towards fully encrypted messaging.

Which, despite putting Meta offside with many authorities, is inching further ahead.