Meta Moves to the Next Stage of its Messaging Integration Plan, with E2E Encryption on Messenger Group Chats

Despite governments and law enforcement groups in almost every country voicing their opposition to Meta’s plan to integrate all of its messaging tools, which will also see the expansion of end-to-end encryption across all of its messaging apps, Zuck and Co. are plowing ahead anyway, with Messenger users now able to implement encryption in all group chats in the app.

“Last year, we announced that we began testing end-to-end encryption for group chats, including voice and video calls. We’re excited to announce that this feature is available to everyone. Now you can choose to connect with your friends and family in a private and secure way.”

It’s the latest step in Meta’s broader integration plan, which will eventually enable users to cross-communicate between WhatsApp, Messenger and IG Direct, with your inbox mirrored in each, and the same data protections applied to each surface.

Which also, inevitably, means more chats will be fully-encrypted, and untrackable by law enforcement. Many have raised concerns about the limitations this could put on investigations into potential criminal activity, but Meta’s view is that all users should have more choice about the data that they share, and who, if anyone, can access such.

Which is the same reasoning Apple’s used with its ATT update, which limits personal data tracking on iOS devices, and the same logic that Google’s applying in its moves to eliminate cookie tracking.

And there definitely is a broader push to provide more consumer protections over such, especially as we spend more and more time online - but it is also interesting to note that in each of these cases, the platforms themselves also glean benefits by limiting outside data access.

For Apple, it still collects user data, which it’s still able to use for its own ad targeting and tracking purposes, much like Google will be able to with its new ‘Topics’ approach.

In Meta’s case, it could be argued that Meta benefits from hiding more conversations, as it can’t be blamed for causing division and angst if no one has any way of knowing what its users are sharing.

The expanded integration of its messaging back-end also welds its various tools together, which would make it harder to split the company up, if indeed Meta’s acquisitions of Instagram and WhatsApp were at some stage found to be in violation of antitrust law. The FTC is still pursuing Meta on this front, and many have noted that the merger of its messaging tools would potentially offer some protection against this - which is another reason why some are calling for Meta’s integration plan to be blocked.

But that opposition doesn’t appear to be slowing its progress, with the latest stage of its integration now in the books, as it moves onto the next element.

In addition to the expanded encryption options, Meta’s also adding new notifications when someone takes a screenshot of a disappearing message, providing more transparency in the process. 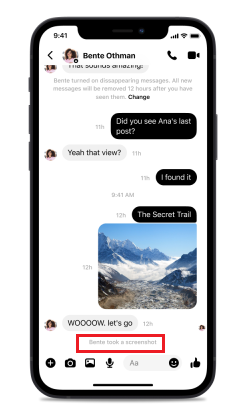 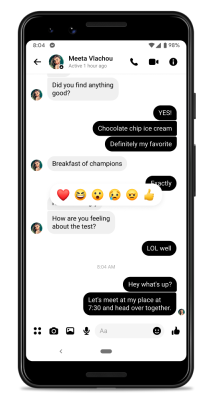 “With reactions, you’ll be able tap and hold on a message to bring up the reactions tray to make your choice of reaction. You can also double tap a message to “heart” it.”

Users will also now be able to reply to specific messages in end-to-end encrypted chats, either by long pressing or swiping, while Meta’s also adding a new option that will enable you to forward a message from an encrypted chat stream.

“Long-pressing on a message will give you the option to forward. One you tap the ‘forward’ button, a share sheet will be displayed so you can share with one or many people or groups. You’ll also be able to create a new group before forwarding a message.”

Meta’s also rolling out new video editing tools, including the ability to add stickers, use mark-up tools, and add text to your clips, along with cropping and audio editing options. 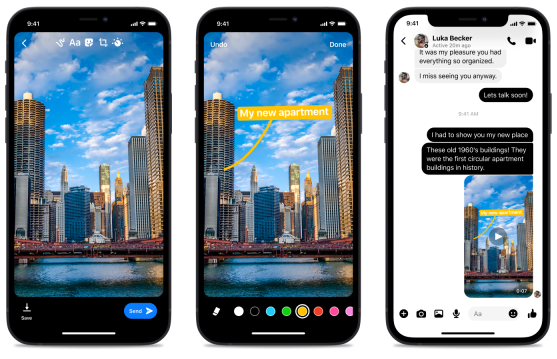 Functionally, most of these tools don’t add anything new to the broader messaging experience, but it’s the first time that they’ve been made available within encrypted chats on Messenger, which could get more people using encrypted chats for more purpose.

And many people do prefer the safety and protection of communicating via more secure, more private messaging.

There’s a reason why WhatsApp has over 2 billion users, because with encrypted messaging by default, amid ongoing media coverage around the dangers of social sharing, and how it can come back to haunt you, more people are indeed turning to WhatsApp instead of the more common messaging tools, as a means to keep in touch, and share whatever you feel, without fear of outside judgment.

But that does, as noted, also facilitate other forms of communication, including criminal activity.

How harmful that is now, and might be in future, is difficult to say, but the key concern expressed by government officials and law enforcement is that encryption removes the capacity to track perpetrators of crimes, and in particular, the sharing of child abuse material, which then gives these criminals essentially free license to more widely distribute such across Meta’s massive network.

The other side of this is that more people want more privacy. The European Union has spent years implementing advanced privacy laws to protect people’s digital data, while a recent report from the UK Information Commissioner found that encrypting communications actually strengthens online safety for children “by reducing their exposure to threats such as blackmail, while also allowing businesses to share information securely”.

Which is more of a concern? Is there more harm in potentially allowing criminal activity to occur in these hidden networks, with police and investigators blinded in pursuit, or is there more protection in keeping user conversations safe, and limiting instances of people having the content that they share online weaponized against them?

There’s no right answer, and likely no way to get to a definitive consensus, but either way, Meta’s pushing ahead with the plan, either for its own benefit or the greater good of society.

How you feel on this will come down to your own personal perspective.