After testing the option out for more than a year, Facebook has today officially launched its new News Feed Filter Bar option, which makes it easier for users to switch between the regular News Feed, ranked by Facebook's notorious algorithm, and either a 'Favorites' or 'Recent' listing of posts, the latter being kind of like a reverse-chronological feed. 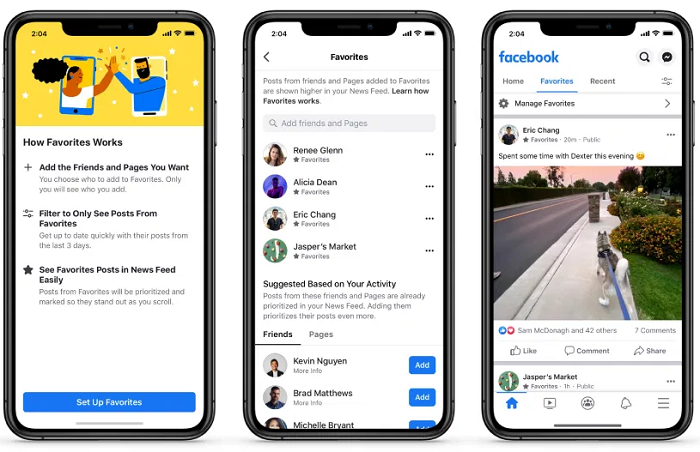 Kind of. As you can see in these screenshots, the main focus of Facebook's update is its Favorites option, which it first launched for some users back in October. Favorites enables you to select up to 30 friends and Pages to include in your priority listing, with the posts from those that you choose then highlighted with a badge, and appearing higher in your regular News Feed.

And with these optional Feed listings, you can now view your Favorites listing as a separate, individual feed, which will give users more control over their Facebook experience.

You can see in this example the three alternate feed options at the top of your News Feed:

Tap on the control icon to the right of these options and you'll be shown this pop-up of additional controls. 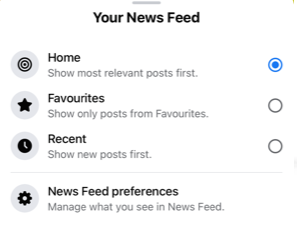 So it's the same, options, but you can also access your News Feed preferences, which offers more controls over your feed.

The thing is, none of these controls is technically new. As noted, Favorites has been around since last October, and you've long been able to choose 'See first' on people and Pages for your feed, which is really the same thing. And while it seems like an easy way to switch to a reverse-chronological feed, the 'Recent' listing is still defined by the algorithm, it's just that rather than seeing the posts Facebook has chosen for you, in the order that it decides, you can list them by upload date.

So it's not full control of your feed as such, but it does give users more options. And maybe more importantly for Facebook, it does offer the perception of more control over your feed, within easy reach, at any time.

That could be enough to quell at least some of the ongoing debates around how Facebook's algorithm manipulates engagement - which is the focus of a separate new essay from the company's VP of Global Affairs and Communication Nick Clegg, which goes into detail about how Facebook's really not to blame for societal division and angst, and how there's no specific evidence to suggest that Facebook is any more polarizing than anything else.

"Perhaps it is time to acknowledge it is not simply the fault of faceless machines? Consider, for example, the presence of bad and polarizing content on private messaging apps - iMessage, Signal, Telegram, WhatsApp - used by billions of people around the world. None of those apps deploy content or ranking algorithms. It’s just humans talking to humans without any machine getting in the way."

There's a lot to explore around Facebook's perspective on such within this post, too much to go into here, but the essence is that, in Facebook's view, it's working to provide more control to users through tools like this, because it's not, as many have suggested, in Facebook's interests to show the most divisive, sensational content to users, in order to spark engagement.

The linkages here are fairly tenuous - in the example above, for instance, the fact that people share divisive content within messaging apps doesn't mean that hasn't first been influenced by Facebook's algorithm in showing users that content in their News Feed before distributing. But Clegg's basic premise is that it's not Facebook's aim to make its platform more sticky by showing more emotionally charged content, and that these new controls, along with various other changes Facebook has rolled out in recent times, underline that.

How you view that sentiment will largely come down to personal perception. Clegg is correct in noting that academic research is varied, but there is definitely evidence to suggest that Facebook has fueled societal divides. But the Clegg's final contention also lies in the fact that people make the choice about where and how they interact. That's also true, but again, there's more complexity to it than simply putting it back on users and their personal choice in such.

Aside from the new feed controls, Facebook is also giving users a new option to control who can comment on their posts, with a view to limiting unwanted interactions in the app. 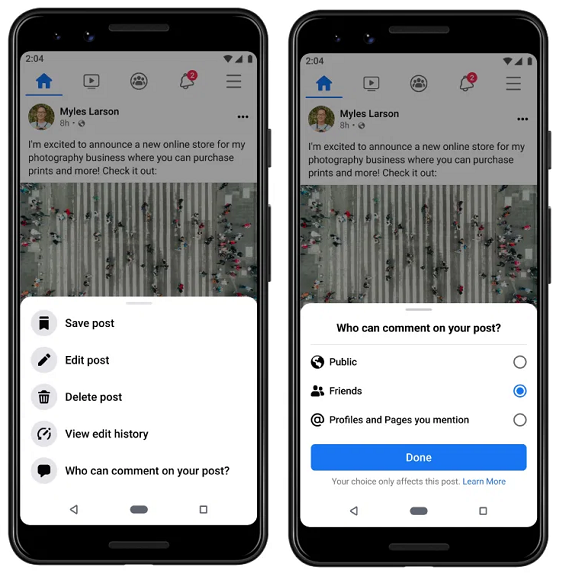 The option is similar to the reply controls that Twitter launched back in August, which provide more capacity for keeping your conversations limited to those you care about.

That's an important note - the new comment controls don't only apply to personal posts, but Pages can also use the new restrictions to limit who can engage with their updates.

And again, while Facebook is painting this one way - providing more controls to help users manage their activity - the truth here is also a little more nuanced.

As reported by The Guardian, the new controls also align with a 2019 court ruling in Australia which found that news media companies can be held liable for defamatory comments posted by users on their public Facebook Pages.

"The ruling found media companies have a responsibility to pre-moderate comments, but previously there was no way to screen comments posted on Facebook before they were published, unless the page administrators used a limited keyword filter to pick up a word or words and prevent comments containing those words being posted."

Since this ruling, media companies have been forced to further invest into comment moderation, but this new option would enable these entities to have more specific control over such, which could see them, essentially, switch off comments for more divisive content, reducing that burden.

So again, while Facebook's saying one thing, there's seemingly another side to also consider. But either way, it's another consideration in your process, and it could help restrict abusive, aggressive comments in the app - though no doubt it will also spark more debate over the impacts of filter bubbles and restricting who you engage with, and how, in the app.

And finally, Facebook is also adding new notes of context on posts that it recommends to users in their News Feeds. 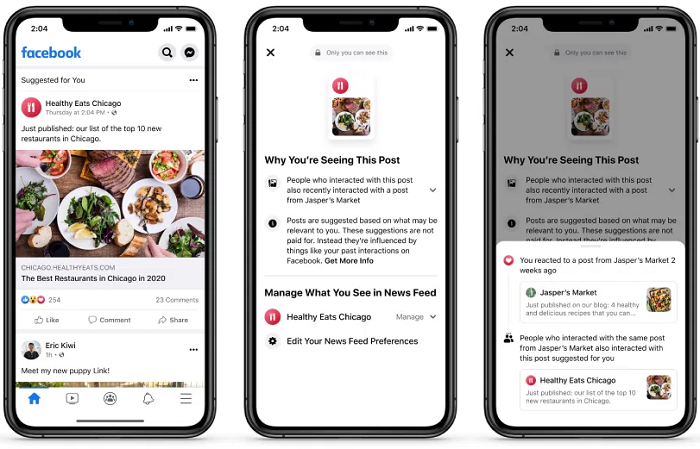 "Today, we’re also providing more context around the content we suggest in News Feed by expanding  “Why am I seeing this?.” This means that you’ll be able to tap on posts from the friends, Pages, and Groups you follow as well as some of the posts we suggest to you and get more context on why they’re appearing in your News Feed."

As you can see, the new option essentially extends Facebook's ads explainers to regular feed posts, which will help users get more context, if they choose, as to why something is appearing in their feed.

There are some interesting options here, which have broader implications in the wider context of Facebook's impact, and it is interesting to also note the timing of the release (just before a long weekend) and the purpose of this new communication.

Essentially, these tools don't provide a lot of new functionality, but they do seem to provide more, which again, seems to be the main purpose. By giving users more options to manage their interactions, it puts further onus on the users themselves to manage their experience, which appears to be Facebook's main push. "It's not us, it's you, we're giving you the tools to stop yourself being indoctrinated or radicalized". It's then up to users how they apply them.

As noted, that seems a little tenuous, and disingenuous in approach. But based on Clegg's essay, that clearly Facebook's angle, and these new tools align with that approach.

The new Feed Filter bar is now available on Android, with the option rolling out on iOS in the coming weeks. 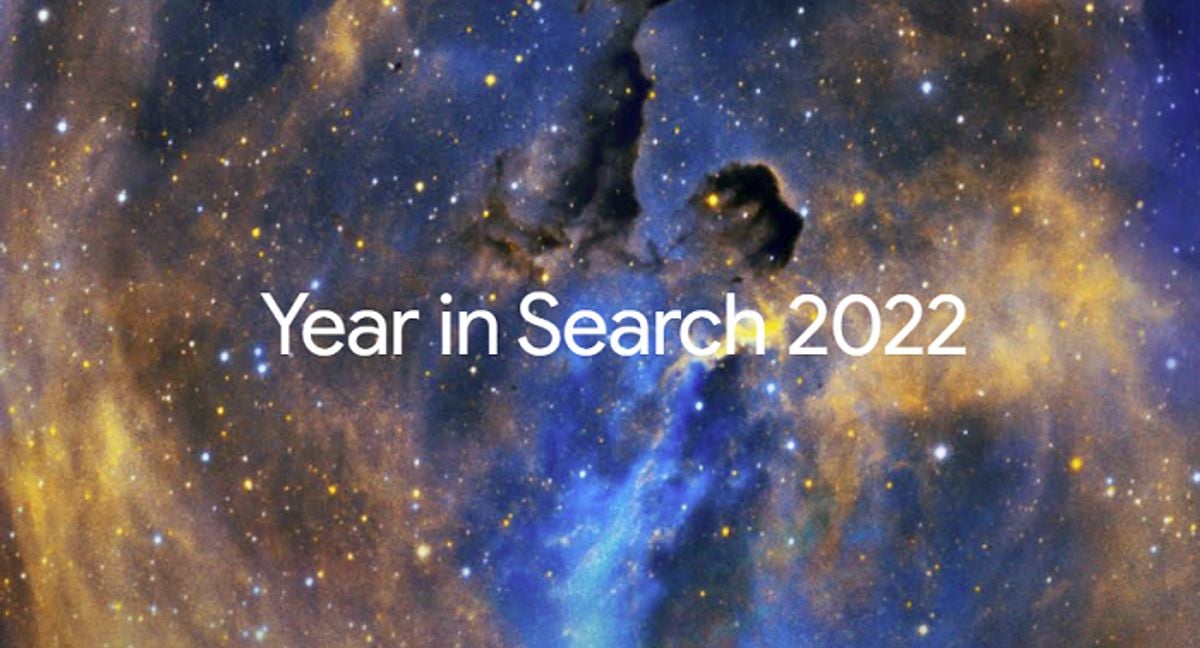 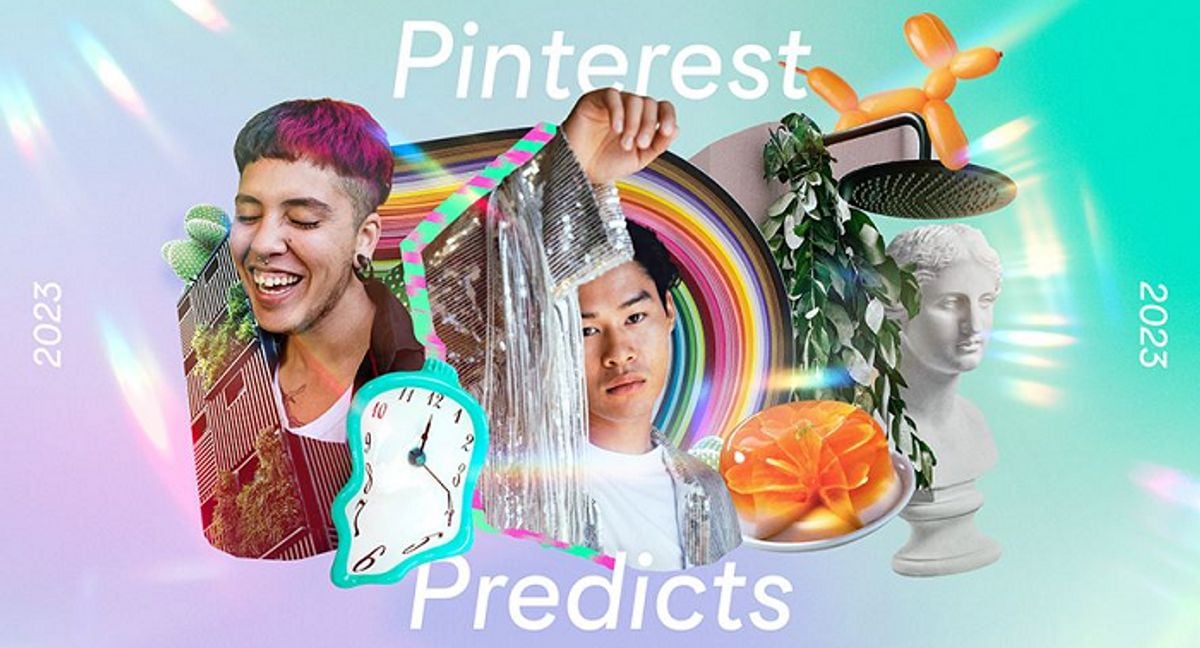 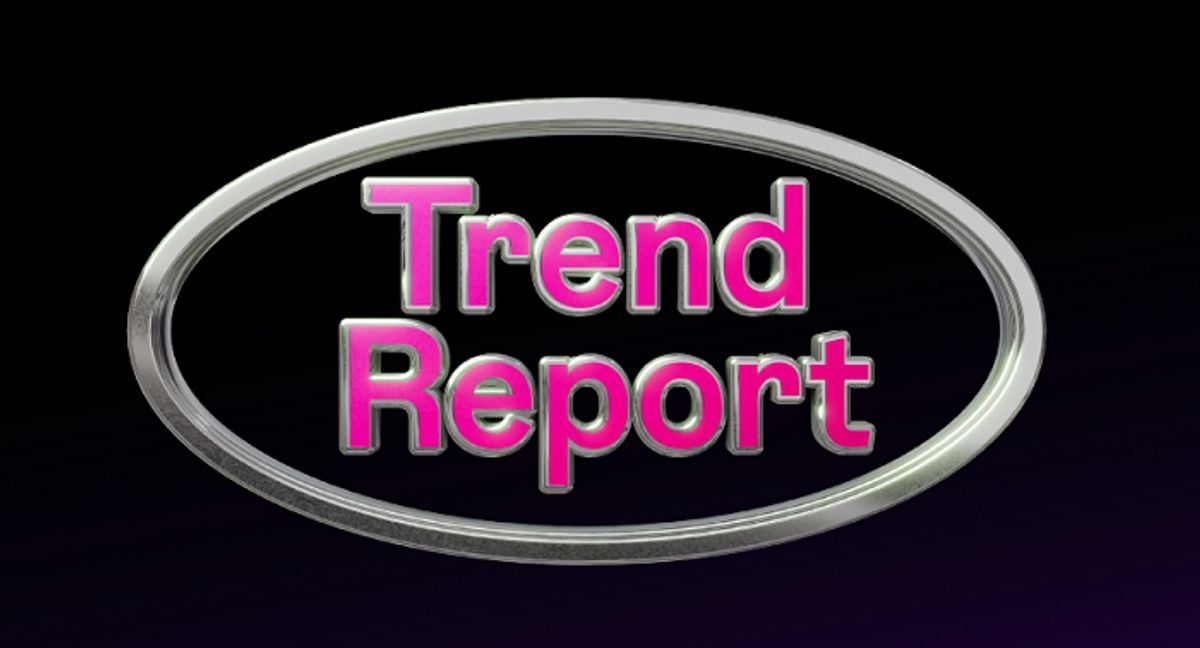 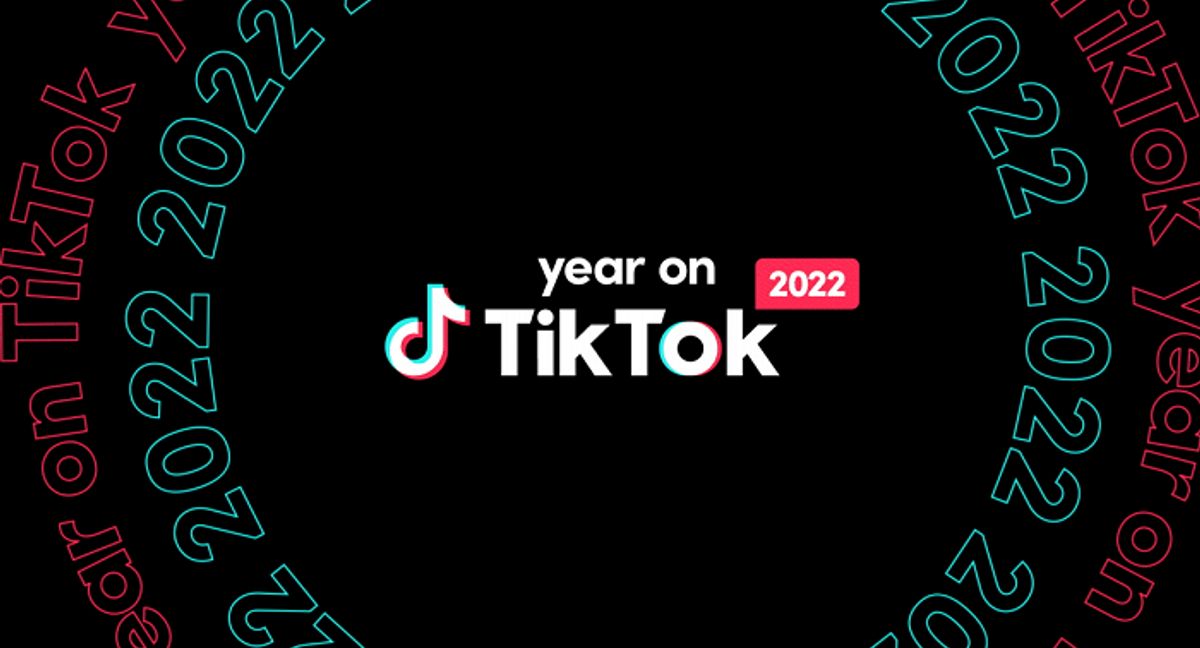