Facebook has this week launched a new 'one-time notification' API for businesses on Messenger, which will enable brands to get in back contact with potential customers with updates relevant to their interests.

"In December, we announced our plans to introduce [a new] API to support valuable use cases like price drop alerts, back in stock alerts, and other important follow-ups that people have requested notifications for. The way the API works is simple: Businesses can send a message to the user asking if they want to be notified on a topic. If the user asks to be notified, the business receives a token and can use this token to send out the notification with the information the user requested at a later time." 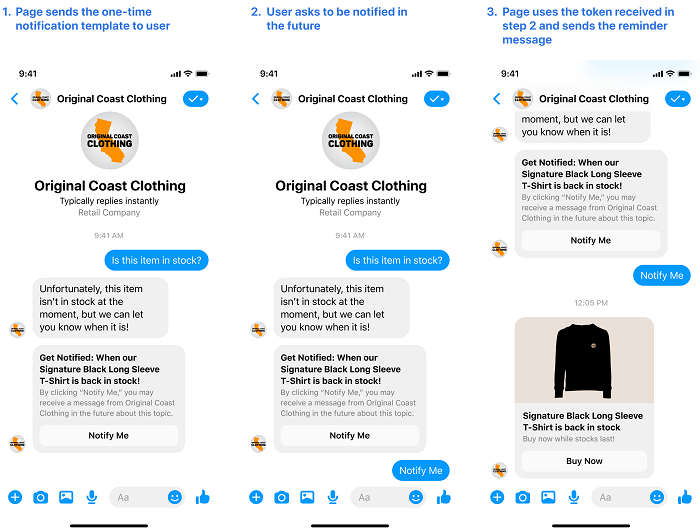 The option adds to business' capacity to stay in touch with users via direct message.

Facebook has strict limits on how often brands can contact potential customers via Messenger, in order to avoid spam. Up till January, businesses had 24 hours to respond to a message initiated by a person in Messenger when using standard messaging, with an additional allowance on top of that to send one more message after that 24-hour window. This catered for instances where a business wasn't able to respond within that initial day, but that option has now been removed "in line with people’s expectations of faster responses from businesses".

This new API provides a similar option, though with more restrictive parameters, as nominated by the user, further limiting the potential for Messenger spam.

In some ways, the restrictions on message responses underline the challenges confronting Facebook in monetizing messaging, both in Messenger and WhatsApp. Last month, Facebook announced that it had decided not to push ahead with ads in WhatsApp, limiting its revenue potential, but there are other avenues for Facebook to tap into messaging business activity, and drive opportunities through the option.

One of those is direct commerce, which Facebook appears to be moving towards with the development of both Facebook Pay and WhatsApp Pay, initially enabling money transfer via message. Once funds are being transferred within its messaging apps, that will make it easier for Facebook to encourage spending, and its already investing in eCommerce start-ups which specialize in messaging commerce.

Ads in messaging streams are tough, due to it being such an intimate connection channel, and the risk of spam is high. But there are other options, and additions like this new API will likely help facilitate the next stage of messaging business activity.

UPDATE (2/9): The change to Facebook's existing +1 messaging rules for business has been delayed to March 4th, 2020 - more info here.