With the US President Election only 40 days away, Facebook has this week reported that it recently detected and removed a cluster of China-based Facebook accounts and Pages that had been seeking to interfere in foreign politics, including the US.

However, the US wasn't the network's primary focus - as per Facebook:

"In Southeast Asia where this network focused most of its activity, they posted in Chinese, Filipino and English about global news and current events including Beijing’s interests in the South China Sea; Hong Kong; content supportive of President Rodrigo Duterte and Sarah Duterte’s potential run in the 2022 Presidential election; criticism of Rappler, an independent news organization in the Philippines; issues relevant to the overseas Filipino workers; and praise and some criticism of China. In the US, where this network focused the least and gained almost no following, they posted content both in support of and against presidential candidates Pete Buttigieg, Joe Biden and Donald Trump."

The main focus seems to have been influencing the conversation around naval activity in the South China Sea, including US Navy ships - though as Facebook notes, the group had also sought to distribute content related to the US election. 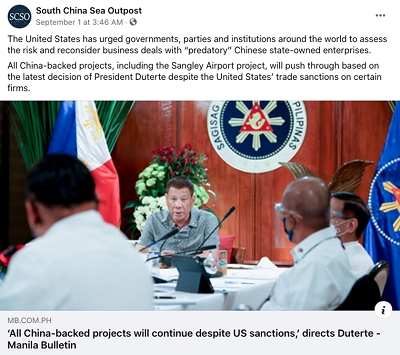 The finding is a concern given the ongoing tension between the US and China, sparked in some ways by US President Donald Trump seeking to hold China accountable for the outbreak of COVID-19.

Since his election in 2016, Trump has sought to pressure China on US trade deals, but his criticisms over the pandemic have further eroded US-China relations.

In a recent speech to the UN General Assembly, Trump once again reiterated his criticisms:

"​The Chinese government and the World Health Organization - which is virtually controlled by China - falsely declared that there was no evidence of human-to-human transmission. Later, they falsely said people without symptoms would not spread the disease."

Those tensions were also a part of the US Government's push for the sell-off of TikTok, with Trump noting that the threat to ban the app was part of retaliatory efforts against China for the spread of COVID-19.

Given this, the fact that a Chinese backed group has been detected seeking to use Facebook to influence US voters in any way is a major concern. Facebook says that the cluster was detected as part of its regular internal investigations into coordinated inauthentic behavior, which, hopefully, bodes well for future enforcement efforts.

But it's another concern to keep an eye on heading into the peak of the campaign period.

In addition to this, Facebook has also reported detecting another, smaller network originating from the Philippines.

"They posted in Filipino and English about local news and events including domestic politics, military activities against terrorism, pending anti-terrorism bill, criticism of communism, youth activists and opposition, the Communist Party of the Philippines and its military wing the New People’s Army, and the National Democratic Front of the Philippines."

Facebook has significantly ramped up its detection and enforcement efforts in this respect in the aftermath of the 2016 US election, but now is the ultimate test of these new systems.

Hopefully, this new action is a positive sign that Facebook's processes are detecting such groups.