"We filed a lawsuit in Virginia today against 12 domain names registered by India-based proxy service Compsys Domain Solutions Private Ltd. that were designed to deceive people by impersonating our family of apps, like: facebook-verify-inc.com, instagramhjack.com and videocall-whatsapp.com."

You've likely seen this type of phishing scam before - scammers create domain names that are similar-sounding to Facebook, or another business, in order to trick users into giving over their information by prompting them with email alerts. 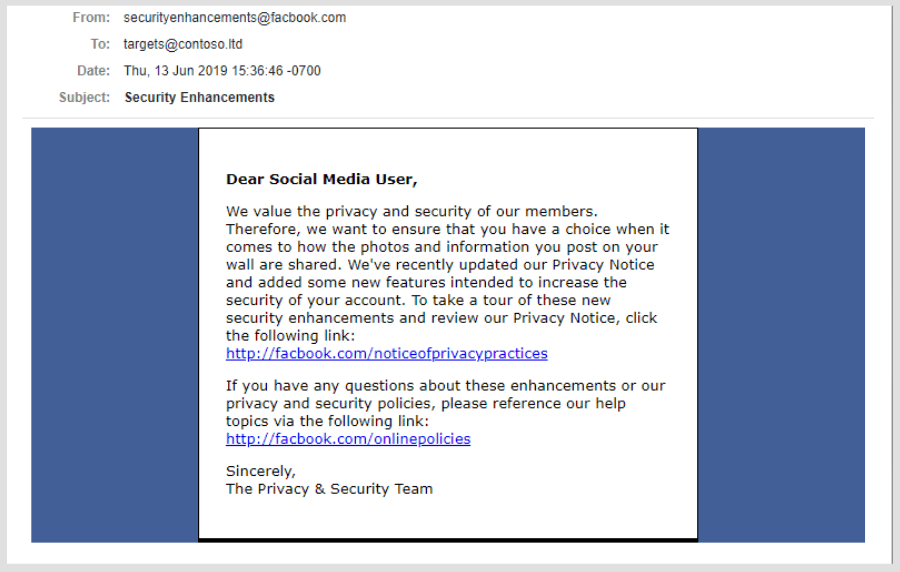 As you can see in this example, the email itself doesn't read quite right - the first red flag - but the domain name from which it's been sent, which you may not notice on first inspection, is actually 'facbook.com', not 'facebook'.

The lawsuit is the latest in Facebook's ongoing push to take a stronger stand against scam activity. Over the past year or so, Facebook has filed a range of lawsuits against such schemes:

On this specific type of scam, Facebook has also taken legal action against two other companies - OnlineNIC (in October 2019) and Whoisguard (in March 2020) - which were both found to be creating Facebook-like domain names for the purpose of duping Facebook users.

For one, through these proceedings, Facebook should be able to establish legal precedent for such activity, which it can then use as reference for the penalization and punishment of others caught doing the same. With these crimes established as exactly that - crimes that do indeed require significant legal recourse - that could make it easier to prosecute future instances as they're detected.

The legal action will also serve as a disincentive. At present, many of these scammers are able to get away with simply being blocked or having these specific sites shut down, but if Facebook can push for actual, legal penalties, which can have much larger reputational and economic impacts, that could make it a bigger risk for others to take in future.

Given the rising importance of digital platforms, and social media platforms in particular, as business and connection tools, it makes sense for Facebook to increase its push on this front. According to reports, Americans lost more than $2.4 billion to online scams in 2018, with one in ten people now falling victim, in some way, to online scammers.

Pushing back against such is important, not only for Facebook, but for all internet users moving forward.

You can read more about Facebook's latest legal action here.