As eCommerce becomes a bigger focus, a key element within this is payments, and facilitating more, easier ways for users to quickly make purchases in-stream, with minimal disruption to their in-app experience.

On this front, Apple is currently working to expand its payment systems, with the incorporation of a new pay by installments element for Apple Pay, and now Facebook is also looking to broaden its payment reach, by making Facebook Pay available as a check-out option on third-party websites. 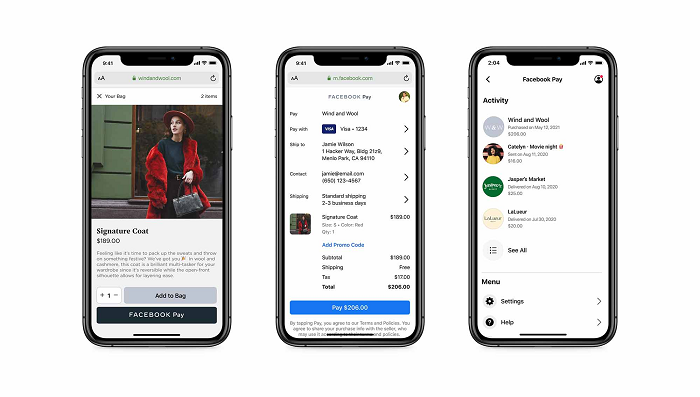 "Starting this August, businesses in the US who use participating platforms will have the ability to enable Facebook Pay as a payment option directly on their websites, giving their customers the ability to speed through checkout without having to re-enter their payment information. We’re starting the rollout with Shopify merchants and expect to expand availability with more platforms and payment service providers over time."

That could provide a big boost for Facebook's broader eCommerce options, by establishing more trust in Facebook Pay as a payment option, with its appearance on other, reputable websites giving the option both more exposure and more endorsement.

And if users get used to paying via Facebook Pay in more ways, that'll make them more likely to purchase more readily through the same on Facebook and Instagram as well, which will help in Facebook's bigger push to make all posts shoppable, broadening in-app activity.

In addition to this, the process will also give Facebook more direct transaction data, which could help it better attribute ad response, despite losing access to a lot of user activity insight as a result of Apple's recent ATT data tracking update.

Facebook does make specific note that any payment details through Facebook Pay are encrypted, and that the card and bank account numbers that people provide "will not be used to personalize their experience or inform the ads they see". But it would still have data on people's purchases, which could then be linked to their Facebook activity. In this sense, it could provide a big boost in ad targeting options, dependent on how Facebook looks to connect that data back to each person's Facebook presence.

Either way, it's a good addition for Facebook, which could have major implications for its growing eCommerce push.

It may not seem like a major step in this respect, but facilitating ease of use, and adding credibility, through expanded exposure, could provide a big boost for Facebook's growing shopping efforts.

If you’re a Shopify merchant in the US that's interested in adding Facebook Pay on your site, you can find more information here.