Let's admit it - part of the reason why messaging apps are seeing such a significant rise in usage is because we can say whether we want in a message thread, without fear of offending people or causing relationship rifts, upsetting relatives, etc.

That's why this is probably a good addition - as shared by social media expert Matt Navarra, Facebook is now rolling out Touch ID and Face ID lock options for Messenger on iOS. 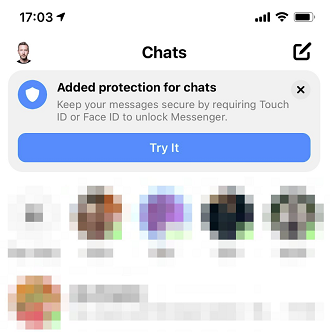 That will stop people from additionally snooping on your Messenger chats.

Once enabled, you can choose how long it takes before your Messenger needs to be unlocked again with Face/Touch ID.

So for those overly paranoid about people checking their phone, they can lock it as soon as they've finished using the app.

Social media advisor Jeff Higgins also shared this video of the process in action on opening the app.

Facebook's been working on the option over the last few months, with Engadget sharing screenshots of the in-development tool early last month.

The addition is in line with Facebook's gradual shift towards improving messaging security, which includes its plan to eventually enable end-to-end encryption as the default setting for all messages. That plan has come under intense scrutiny by several government agencies, who believe that a move to full encryption will facilitate increased criminal activity in Facebook's apps. Already, various authorities have raised concerns about encryption in WhatsApp.

However, Facebook is determined to push ahead with its plan, and while locking your Messenger app is a smaller element in this broader process, it's another indicator of user demand for more privacy, and security, with their personal interactions. And worth noting, Messenger already has an optional 'Secret' chat mode which is fully encrypted.

Now to see if it enables the same in WhatsApp and Instagram. Eventually, Facebook plans to merge the messaging functionality of the three apps, which also means that any functionality added to one is likely on its way for the others. It doesn't seem to make much sense that they would add additional security for Messenger if the other two are not protected, so it won't be any surprise to see Facebook launch the same for each app in due course.

Facebook told Engadget that it also plans to port the same option to Android in the near future.