In what looks to be a response to the rising popularity of Clubhouse, and audio social more broadly, Instagram is rolling out two new features for IG Live - the capacity to mute your audio during a live-stream, and the option to switch off your video during the live broadcast. 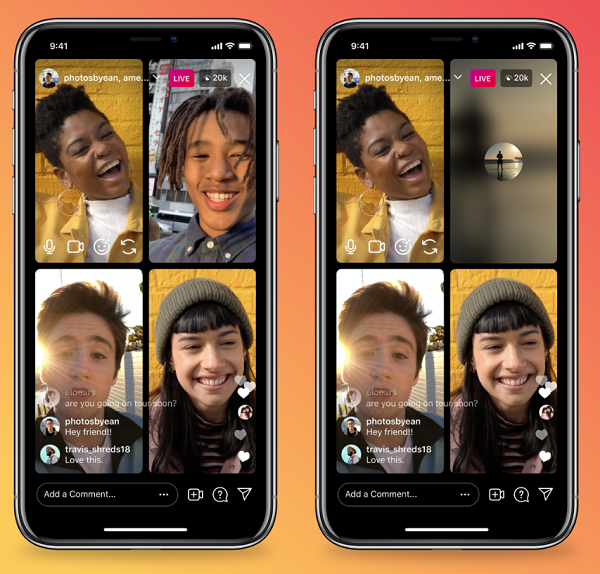 You can see the new controls at the bottom of the top left video panel here - now, participants within a stream will be able to simply tap to switch off their audio or video (along with the capacity to add stickers and effects and flip their camera). When the camera is switched off, that participants' screen will revert to their profile image (top right in the second screenshot above).

Which does look very similar to the Clubhouse-style profile bubbles, and through IG live broadcasts, with up to three other participants, it could somewhat replicate the Clubhouse type audio social experience within Instagram, broadcasting your conversation to your audience within the app, via the top of feed Stories bubble - which could hold more appeal to those who've built their audience in Instagram, as opposed to establishing a new crowd via a new audio app.

"We want to build on our Live product and offer even more ways for our creator community to drive serendipitous, engaging conversation with each other and their audience. By giving people the option to mute their audio or turn off their video, hosts will have the added flexibility for their live-stream experience, as the added functionality could help decrease pressure to look or sound a certain way while broadcasting live."

So it sounds very much like a Clubhouse-focused addition, through a simple tweak within the current Instagram Live experience. Of course, you can also create Messenger Rooms through Instagram, which also replicates a similar process in a more private setting. But the fact that this option enables you to broadcast your audio conversation publicly does align more with the broader audio social shift.

Which adds to the rising competition for Clubhouse, which has seen a significant slowdown in new user momentum of late.

Indeed, looking at the latest data from Sensor Tower, the trendline for Clubhouse downloads seems like a concern.

Clubhouse is working to evolve quickly, with new creator funding initiatives to help its top broadcasters monetize their efforts, and a new deal with the NFL to broadcast exclusive content.

But with the competition increasing a little more every other day, its outlook is not shining as brightly as it once did.

​And now, Instagram Live has its own audio social tool, which is already built, and immediately available to the app's billion plus users.

Each new function adds to Clubhouse's scale challenges, because when people can create audio rooms in the apps they already use, to connect with the audiences they've already built, why would they revert to another app, especially an invite-only one that would essentially restrict their reach?

The key for Clubhouse now lies in proving why its platform is more valuable, be it through better content (luring top hosts and guests), better algorithmic matching to highlight broadcasts more relevant to your interests, or simply a better experience, in terms of audio quality, functionality, etc.

It's hard to see Clubhouse winning out on any of these fronts. Users are already complaining that as more people sign-up to the app, discovery is becoming more difficult, while the larger reach and resources of the bigger players will likely outweigh Clubhouse on the other two fronts.

That's not to say Clubhouse can't win. Few expected Snapchat to recover when Instagram stole Stories, while TikTok has continued to rise, despite many, many challengers. Clubhouse has built strong connections with some creators, and has established itself as a cool app among the in-crowd, which could help it succeed.

But the challenge before it keeps getting steeper, which could make ongoing growth difficult.

Instagram is rolling out its new audio and camera options in IG Live to all regions from today.