Last month, Facebook-owned WhatsApp announced a new update which would mean that WhatsApp users would essentially be sharing more of their in-app data with Facebook.

The update was specifically focused on how users interacted with businesses, and didn't include sharing more personal information with The Social Network. But regardless, the planned change spooked many WhatsApp users, who were none to pleased to be forced into the new data-sharing arrangement.

That sparked a flurry of downloads of alternative messaging apps, and eventually prompted WhatsApp to delay the change. And now, with the latest download charts from Sensor Tower, we can get some more perspective on the impacts of that announcement - and why Facebook took out full-page newspaper ads, among other measures, in an effort to better explain the update. 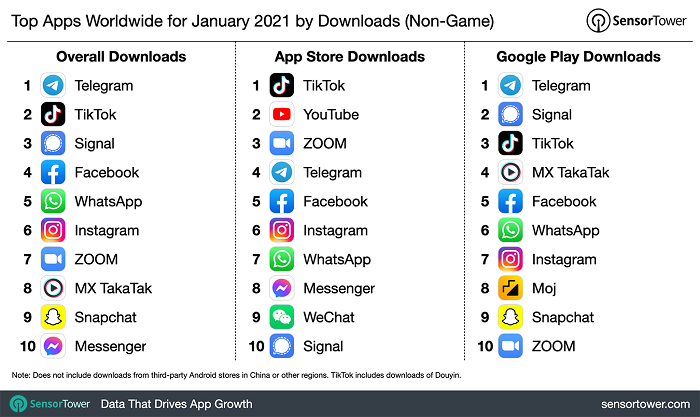 "Telegram was the most downloaded non-gaming app worldwide for January 2021 with more than 63 million installs, 3.8 times its downloads in January 2020. The countries with the largest number of Telegram installs were India at 24%, followed by Indonesia at 10%."

As you can see here, both Telegram and Signal rocketed up the download charts in January, underlining the significance of the backlash to the WhatsApp update. That update, as noted, didn't end up going ahead, but if Facebook plans to eventually push forward with its broader messaging integration plan, which will mean that all users across Messenger, Instagram and WhatsApp can all message each other from each platform, it will, eventually, need to implement similar change.

It'll be working hard on its messaging, as it's now on unsteady ground with users over such updates.

Facebook would be most concerned about the backlash in India, where it's working to make WhatsApp - the most used messaging app in the nation - the key platform for all day-to-day interactions and transactions, similar to WeChat in China. Facebook has been trying to establish a bigger presence in the burgeoning Indian market for some time, and just last year it gained approval for an expansion of WhatsApp Pay, while it also invested $5.7 billion in local internet provider Jio.

The scale of that investment underlines the potential Facebook sees in the Indian market. The fact that so many Indian users downloaded Telegram is a significant red flag - which is why Facebook delayed the update, and will now need to reconsider its options.

Among other apps, TikTok remains high on the list, underlining its growth, while Facebook-owned apps continue to dominate overall.

But it is interesting to note the WhatsApp backlash, and it'll be interesting to see whether those trends hold at all in February's download numbers. If more people start new networks on other messaging apps, that'll be a big concern for Facebook, which could force them back to the drawing board, in at least some respects, on its global domination plans.