Messenger Launches 'Soundmojis' to Add Another Element to Your Replies

Coinciding with World Emoji Day, Messenger has today announced the launch of its new 'Soundmojis', which are emojis that play a short audio clip, providing another interactive element for your message threads.

????#Soundmojis, the way to share what words just can’t! ???? pic.twitter.com/0OOlRhAFtP

As you can see here, Soundmojis, when added to a message, also play an audio snippet, which the recipient will hear when they get the message.

"[Soundmojis are] a next-level emoji that lets you send short sound clips in a Messenger chat, ranging from clapping, crickets, drumroll, and evil laughter, to audio clips from your favorite artists like Rebecca Black and your favorite TV shows and movies like Universal Pictures’ F9, NBC and Universal Television’s Brooklyn Nine-Nine, and Netflix and Shondaland’s Bridgerton. “Ah, the drama of it all.”

That could be an engaging, interesting addition to your chat threads, which could end up being a big hit for the app - so long as you don't suddenly blast the office or the train carriage with a spooky ghost sound.

Facebook says that people send more than 2.4 billion messages with emojis on Messenger every day, so leaning into that usage makes sense, and with more people now more open to audio elements than they have been in the past (88% of TikTok users, for example, say that sound is essential to the TikTok experience), it could be the perfect time to take emojis to the next level, while the inclusion of promotional tie-in clips also points to another opportunity for Facebook to turn it into a marketing opportunity, which could have some solid niche use cases.

You can imagine that a popular ad campaign could expand specific quotes or clips to Soundmojis in order to boost their branding effort, for example, which won't be something that all brands can tap into, but for big campaigns, or those that suddenly gain traction, and inspire people to quote and reference, it could be an added consideration.

Facebook hasn't, at this stage, outlined how brands may be able to do this, but given the above tie-ins, it's likely already developing this for the broader market.

If you want to check out your Soundmoji options, once you've updated your Messenger app, you can tap the smiley face to open the expressions menu, then select the loudspeaker icon. From there, you can preview and send your Soundmoji stickers. 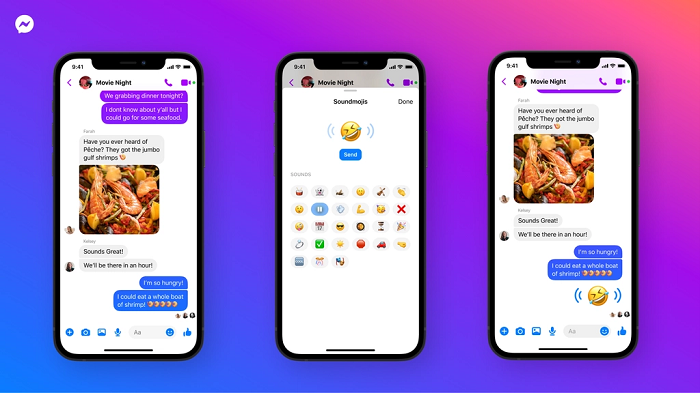 Facebook says that it will continue to update its Soundmoji library, which will include popular and famous voices to add to your audio response options.

In addition to this, and also tying into World Emoji Day, Facebook has provided this overview of the most popular food and drink emojis used across Facebook, which could add some context to your planning. 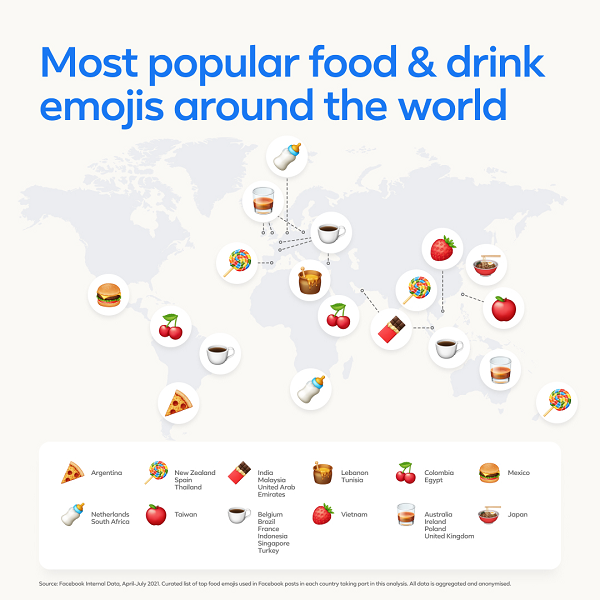 Or not. it's a fairly basic overview, with not a lot of detail, but it provides another interesting data point, underlining emoji use, which could further point to Soundmojis being a winner for the platform.

It'll be interesting to see where Facebook goes with this, and how open users are to Soundmoji clips. It could be a significant addition, for regular users and brands.

Hopefully we'll get some usage stats from Facebook in the near future.