With less than a week to go until the US Presidential Election, two new reports have looked at how Facebook is handling political discussion, and the role that it's playing in fueling the various narratives related to either side of the debate.

The first report comes from Media Matters which found that despite claims of Conservative bias, right-leaning Facebook Pages are actually gaining far more traction on the platform than moderate or left-leaning entities. 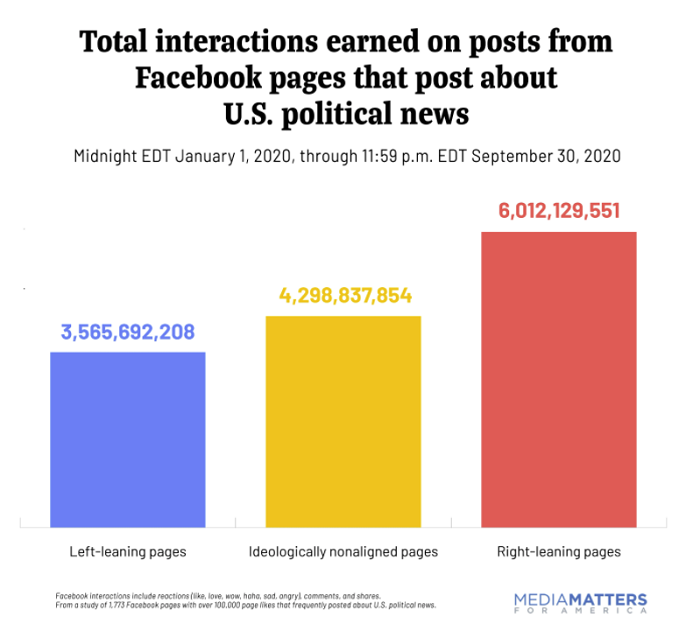 As per Media Matters:

"For years, right-wing media and conservative politicians have claimed that social media and tech companies are biased against them and censor their content, despite copious data proving otherwise. In a new study, Media Matters again found no evidence of this alleged censorship. In fact, we found that right-leaning pages consistently earn more interactions than left-leaning or ideologically nonaligned pages."

Indeed, even US President Donald Trump has called for increased regulation of social media platforms due to their bias against Conservative views. But the evidence here, based on almost 2,000 Facebook Pages, suggests the opposite - which also underlines the role Facebook plays in facilitating political discussion, and how Facebook users are getting their political news content.

Which leads into the next report - according to a study by NewsGuard, many Facebook Pages are still spreading misinformation about the voting process, despite Facebook implementing various measures to combat such in recent months.

"[We] identified 40 Facebook Pages that are “super-spreaders” of election-related misinformation, meaning that they have shared false content about voting or the electoral process to their audiences of at least 100,000 followers. Only three of the 53 posts we identified on these pages - which together reach approximately 22.9 million followers - were flagged by Facebook as false."

NewsGuard also notes that four of the Pages it's identified have managers based outside the US, despite their focus on American politics.

It seems, based on these investigations, that Facebook is still playing a significant role in both general discussion of political issues, and of more sensitive topics, like voting process. And despite its efforts to reduce misinformation, Facebook may once again be playing a key role in the dissemination of such, while the domination of reach by right-wing entities shows that, if anything, Facebook is helping these Pages connect with a broader audience, as opposed to restricting their voice.

That, in itself, is not a bad thing. Each side of the political spectrum has equal right to be heard, and it's also not to say that these specific Pages are sharing misinformation or working to mislead voters with their posts. But it shows that Facebook is still playing a key role in political discussion - and even though the platform has implemented various measures to reduce misinformation, such efforts are still happening, at least in some capacity.

Will that influence the outcome of next week's poll? As with 2016, will likely see more about this in retrospect, but it does seem that Facebook is playing a key role, once again, in broader political debate.

You can expect many more investigations and dissections to come, but the data underlines the important role that Facebook plays in political discourse, and likely influencing opinion ahead of the polls.