Should You Accept All Connection Requests on LinkedIn?

Should you accept all LinkedIn Connection requests?

The logic, of course, is that you probably shouldn’t, as you could open yourself up to spammers and people who might look to scrape your profile for contact info, which they could then, potentially, collect up and on-sell to the highest bidder.

But then again, if you connect with more people, you expand your LinkedIn network, which gives you more opportunity to get your posts seen and amplified in the app.

Do you accept every connection request that comes your way?

We recently asked the SMT community for their thoughts and more than 5k people participated in our LinkedIn poll. 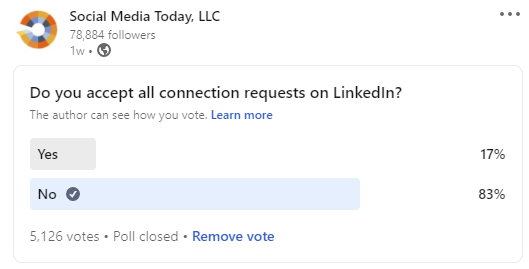 As you can see here, the vast majority of people don’t accept every request to connect. But still, many do, and in the comments, some noted that they felt that this was a good way to expand their network and reach.

‘Why wouldn’t I?’ one user questioned.

LinkedIn’s own advice is that you should only accept connection requests from people that “you know personally and who you trust on a professional level”. Which could be fairly limiting, and there is some value to expanding your connection pool a little further than this. But again, the risk is that you open up your profile to strangers, which exposes not only your personal history, but also your contact info, your company phone number, contacts, connections, etc.

In April last year, a hacker group was found to be selling an archive of personal data, scraped from 500 million LinkedIn users, which included all of the above information and more, which the group had pieced together by combining the LinkedIn listed details with other databases available online, in order to build a more complete personal info profile on a huge number of people.

LinkedIn says that this group did not hack its systems, but that it had been able to grab the info from public and non-public listings, with the latter coming via random connections in the app.

So there is some cause for concern, and caution in connecting – but on the other side, LinkedIn L.I.O.Ns as they call themselves (LinkedIn Open Networker) have built huge presences in the app by connecting with anyone that they can, and some have done so to good effect.

But there is a level of risk. Some other commenters on the poll also noted that accepting all requests could backfire if none of your connections end up engaging with your posts. If you’re just connecting with randoms, and then posting content that none of these people care about or engage with, your subsequent post reach will decline over time, because LinkedIn’s algorithms will determine that no one wants to see what you share.

Or worse, they could mute you, which sends negative signals about your posts.

It seems like a lesser concern, as all of your posts will be seen by some of your first-degree connections in the app, and some of them, you would assume, will engage. But if you’re not generating solid response levels, it may not be an ideal strategy for maximizing your reach.

Different people will have different opinions, and as noted, some L.I.O.Ns will swear by their ‘networking at scale’ approach. But you do need to weigh up all the elements.

At the least, you should take a moment to assess all connection requests before deciding whether to add them in.