Is TikTok part of your holiday marketing strategy?

The fast-growing video platform has become the place to be for many young consumers, and it’s increasingly driving the latest trends, which extends to products and consumer behavior as well.

Indeed, even last year, TikTok says that 80% of its users who bought something on Black Friday indicated that TikTok had played a role in that decision, while 40% said that they’d made a purchase after seeing the exact item on TikTok.

The findings, included in TikTok’s latest research report, are both significant, yet not surprising, with TikTok becoming a bigger part of the social media landscape, and popular culture overall, throughout the pandemic.

Will that see it have even more influence on consumer behavior throughout the 2021 holiday shopping push?

Seems like a safe bet that it’s going to have an impact.

In order to help brands prepare for this, TikTok has outlined some key trend notes to factor into your planning.

First off, TikTok says that brands need to start early, in order to reach consumers ahead of the Black Friday shopping rush.

“Last year online retailers stretched the sale over several weeks, starting early and sustaining longer. Views of the #blackfriday hashtag tripled in the second week of October, peaked on the day itself, and remained relatively high until just before Christmas.” 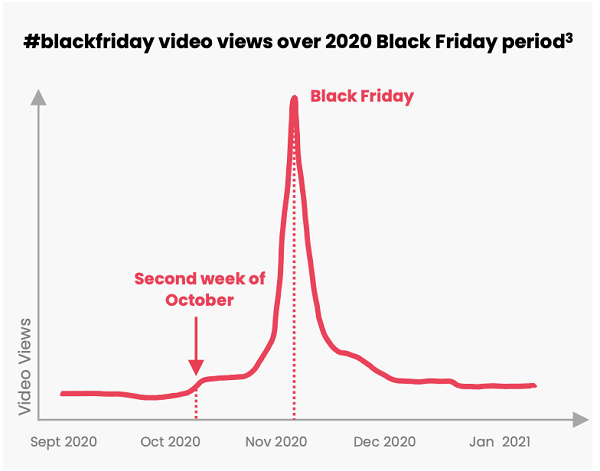 Then again, that’s always the advice of platforms, that you need to start earlier, and spend more on their ads, to maximize the benefits. Which seems like fairly self-serving advice – but the data here tells the tale, and shows that engagement around significant shopping events is peaking earlier, and will likely be even earlier again this year, given the rise of eCommerce and growing anticipation for the season, now that many will have the opportunity to connect with friends and family again.

TikTok also shares notes on the products that are seeing the most engagement on the platform this year – which, unsurprisingly, shows that clothing is a key focus.

No more sweat pants and t-shirts - now that you’ll actually have to leave your house once again, you’ll likely need to replace some of those old, holey, around-the-house staples, while again, the broader excitement around a return to social gatherings has seen many buying up gifts to hand out at Christmas.

It’s interesting to note the influence of TikTok in this respect, which is seemingly growing by the day, and as it works to integrate more eCommerce and promotional options, it seems likely that the platform will continue to play a big role in driving consumer behavior moving forward, at least for the foreseeable future.

As such, it could be worth spending some time in the app, and researching brands in your niche, and how they’re using it. TikTok has also provided some case studies to consider, while you can also check out TikTok’s ads showcase to get more ideas for your efforts.

You can check out TikTok’s latest research report here.