With an IPO expected soon, Snapchat's upping its ads game, meeting with agencies to showcase its latest offerings to help marketers tap into the platform's huge Millennial audience base.

Digiday has reported that Snapchat's pitching a new set of ad formats, while also highlighting the success of their existing options. The first new product Snapchat's looking to promote is their "Snap to Unlock" format. Just as it sounds, Snap to Unlock ads provide users with a Snapcode which they can then activate within the app to unlock exclusive features.

Snapchat has been infected. Snap the ghost to unlock an exclusive #TWD filter. pic.twitter.com/qiy3CjZEXe

While Universal Pictures has also been using Snap to Unlock ads to promote the new film "The Girl On the Train." 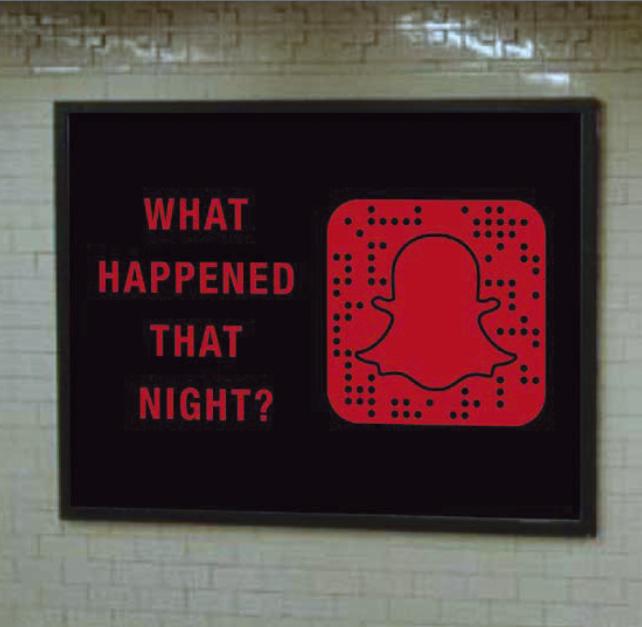 It's an intriguing option, but one which doesn't come cheap - Digiday says that the Snap to Unlock feature will initially only be made available to advertisers who spend up to $750,000 in one quarter or those who run a National Geofilter or Lens campaign. 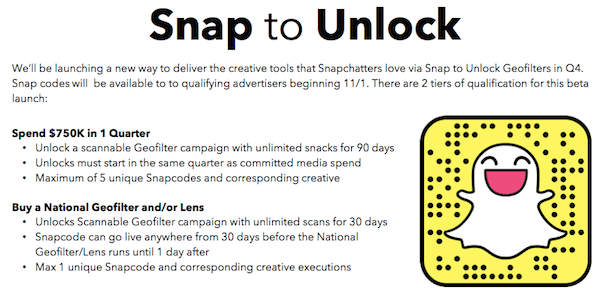 A sponsored lens campaign will reportedly cost up to $750,000 per day on major holidays, and around $500,000 on a regular weekday, so either option is high-end. Snapchat has introduced newer, more cost-effective tools like Custom Geofilters, but in order to get access to the Snap to Unlock option ahead of time, you'll need to be a big spender.

So if you were in a position to spend a quarter of a million on Snapchat ads, what would you get? Included in the same pitch deck, Snapchat's provided a link to some of their more successful campaigns - you can access it in Snapchat by snapping the Snapcode in the slide above.

Within that, Snapchat breaks down the results they've seen from several campaigns, including total views and reach. Those numbers, of course, don't reflect any kind of actual sales or conversions generated, but they do provide some context as to what big advertisers are seeing, at least in best case examples.

So which Snapchat ad offering is performing best? Here's the data on each, as provided by Snapchat (any missing data points were not listed)

As you can see, Lenses, unsurprisingly, lead the pack, generating more than 100 million views in per campaign among those top examples, followed by Geofilters (80.5m avg) and Snap Ads (16.63m). Now, these are the top campaigns, hand-picked by Snapchat, so those averages are not necessarily indicative, but it's safe to assume that this is the peak level of what advertisers can expect, in terms of reach.

For comparison's sake, 111.9 million people, on average, watched the 2016 Super Bowl and ad spots during the game cost $5 million for 30 seconds. Given a sponsored Lens campaign can potentially reach a similar amount, with an average use time of 23.5 seconds, those costs aren't as extreme as they may, initially, appear.

Snapchat's also promoting 3D lenses - where you can not only attach video 'masks' to your face, but the background of the image also moves with you - and new ad attachment options, including articles, long-form video and app-install ads.

In addition, Snapchat's also showcasing its improved analytics tools to help advertisers measure campaign performance. One of the big complaints advertisers have had about Snapchat as an ad platform is the lack of data available - Snapchat's now working with third-party providers like DoubleClick, Nielsen and Millward Brown to provide more transparency on this front.

At this stage, there appears to be no announcement about the platform's rumored image-recognition triggered ads, a unique looking offering that would provide significant differentiation, if enabled.

It's an interesting time for Snapchat. Faced with increasing competition from Facebook, the ephemeral content app's likely to come under real pressure in the near future, forced to innovate faster than its larger, richer foe in order to keep a hold on its audience. Facebook's already flagged its next assault on this front, with CEO Mark Zuckerberg noting in this week's earnings announcement that they're looking to replace the current Facebook status update text box with a camera, utilizing a new camera interface that looks very similar to the one within Snapchat. Facebook's also targeting regions where Snapchat adoption is low to launch copycat features, beating them to the punch and likely lessening their chances of gaining a foothold in those markets.

If Facebook succeeds in its mission, it could be tough for Snapchat to maintain their current momentum.

But it's early days yet, and Snapchat - or Snap Inc. - likely have more than just Spectacles up their sleeve.