One of the core, ongoing criticisms of social media marketing is that you can't put definitive ROI figure on your social efforts. All those Likes and hearts are great, but what you really need to demonstrate is how they translate to actual dollars, how your social efforts are impacting on actual sales.

All the major platforms are working on ways to improve this, and now Snap Inc - with its post-IPO focus on building more revenue opportunities (and despite its founder's aversion to 'creepy' ad targeting) - has outlined its first major effort on this front, with 'Snap to Store' measurement for your Snapchat ad efforts.

It works like this - working with Snapchat, brands will be able to track the number of people who've used Snapchat within their business' physical location. So if you have a retail store (or stores) and a person who visits your store uses Snapchat nearby, Snapchat can track that activity and align that to your location. Snapchat will then cross-check whether that user has seen any of your ads on the platform, providing additional perspective on whether your Snapchat ad efforts are driving real-world actions.

You run a Snapchat ad and you see a sudden spike in in-store visits - and those visitors have seen your Snap ad - safe to say you're on the right track.

According to research commissioned by Snapchat, 80% of Snapchat users take Snaps in restaurants, 66% use the app in shopping malls, 50% are active while at the gym and 49% use it in airports, underlining the potential value of the offering.

Here's what the Snap to Store measurement dashboard looks like. 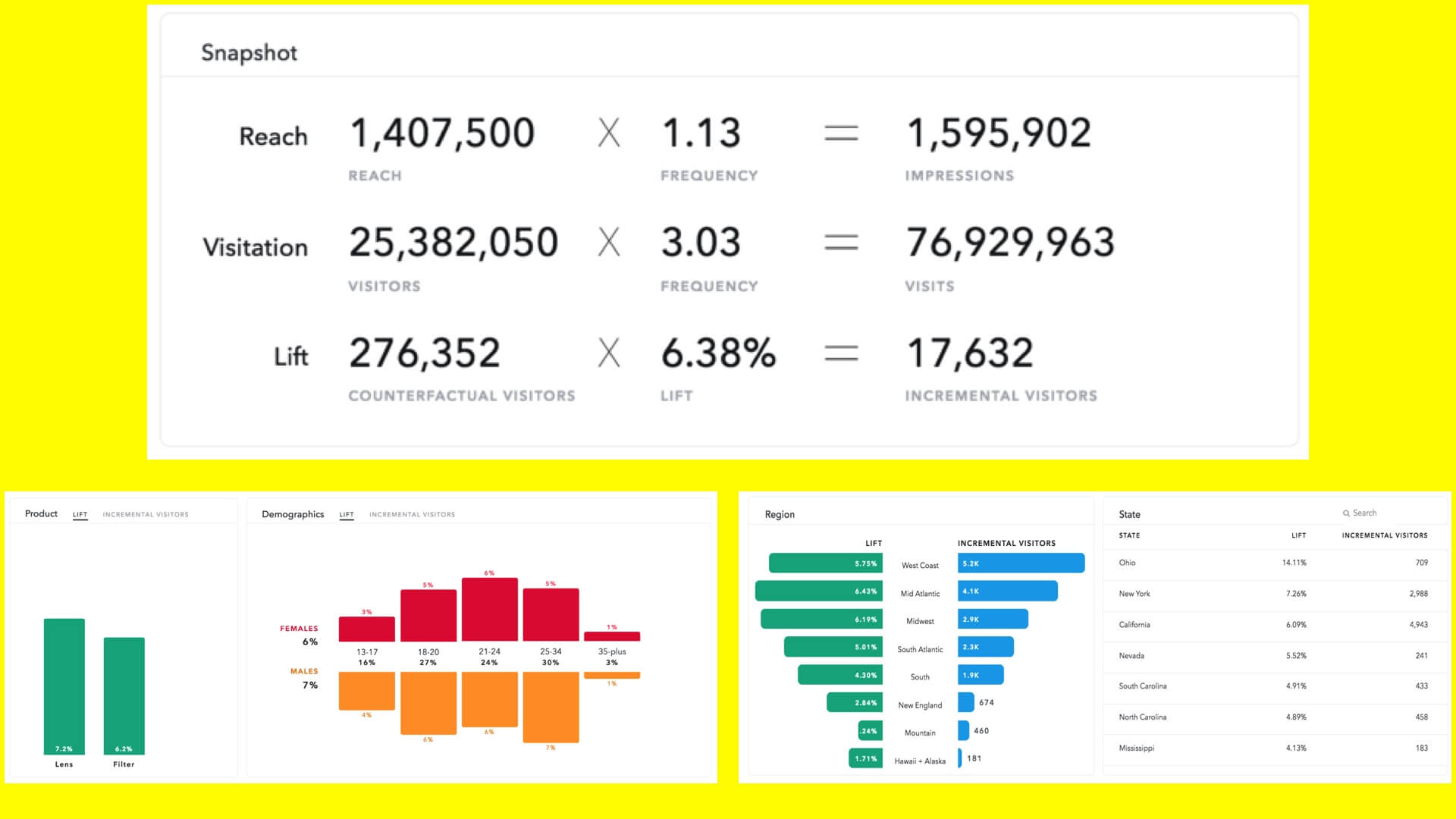 As you can see, the data's broken down into a range of categories, including location and gender, helping to provide more in-depth context on your Snapchat ad efforts.

It's an interesting initiative, though it does have limitations.

For one, Snapchat can only report on people who've opened Snapchat within your location - they're not tracking users' locations when the app is running in the background. Both Facebook and Google offer similar online/offline tracking options, though both of those tools utilize Location Services, which gives them access to more data on this front.

Snapchat will also show you how many people who've visited a location have and have not seen your ads, providing comparative context on ad impact - but they'll only provide such data for businesses that have had at least 1,000 Snapchat users visit their physical location within a 7-day window. This limits the value for a lot of smaller brands.

But still, there's a lot to like about the option - for example, in addition to location and gender breakdowns, Snapchat's also looking to split the data into Snap Lifestyle categories, which include "Gamers", "Football Fans" and "Beauty Mavens", helping to get a better understanding of your on-platform audience.

According to Marketing Land, Snapchat's also planning to display industry-specific benchmark measurements, giving advertisers additional perspective at to how their Snapchat campaigns compare with other advertisers in their vertical.

Snapchat's also looking to add more location targeting options in future, including new audience segments based on where people use the app (i.e."fitness enthusiasts" would enable you to target people who regularly use Snapchat at the gym).

While it won't work for all companies, it's good to see Snapchat stepping up their data game - which, really, if they want to be a serious challenger in the social ad space, they need to improve in order to match up to the industry leader in Facebook. By providing more options on this front, Snapchat's opening up improved access to their lucrative Millennial audience, making it easier to generate real response and highlight actual platform performance.

Snapchat's also, reportedly, working on new ad options and tools, like image-recognition triggered ads, which is another area the company needs to focus on in order to maximize the potential of their 158 million daily active users.