It must be hard to keep track of all the various tests and updates being rolled out across Facebook at any given time. Some users in some regions will have access to one new feature, while others will be seeing something else. But still, given the scale of Facebook, every single tiny update can have a significant effect - get it wrong and the consequences could be severe.

It's understandable that they're ultra-careful with their trials and roll-outs.

But at the same time, The Social Network needs to keep evolving to maintain its market-leading position, so you can expect the tests and updates to keep coming. To help you stay on top of these, and get a better idea of where Zuckerberg and Co. are looking, we compile a weekly list of smaller Facebook tests and updates spotted 'in the wild'.

This week, we've got a wide spread of new initiatives, focused on community-building, video expansion and new ad options - starting with a new way to highlight fundraising initiatives.

Back in February, as part of his essay on the future of Facebook, CEO Mark Zuckerberg highlighted the importance of community, of utilizing the platform's reach for social good and civic initiatives. Part of that focus lead to the development of Facebook's fundraising options - in April, Facebook announced a new option for users to post personal fundraisers, using Facebook's network to help boost causes and get people working together.

Now, Facebook's looking to increase exposure for fundraisers, with a new option that displays suggested fundraisers which users might be interested in contributing to. 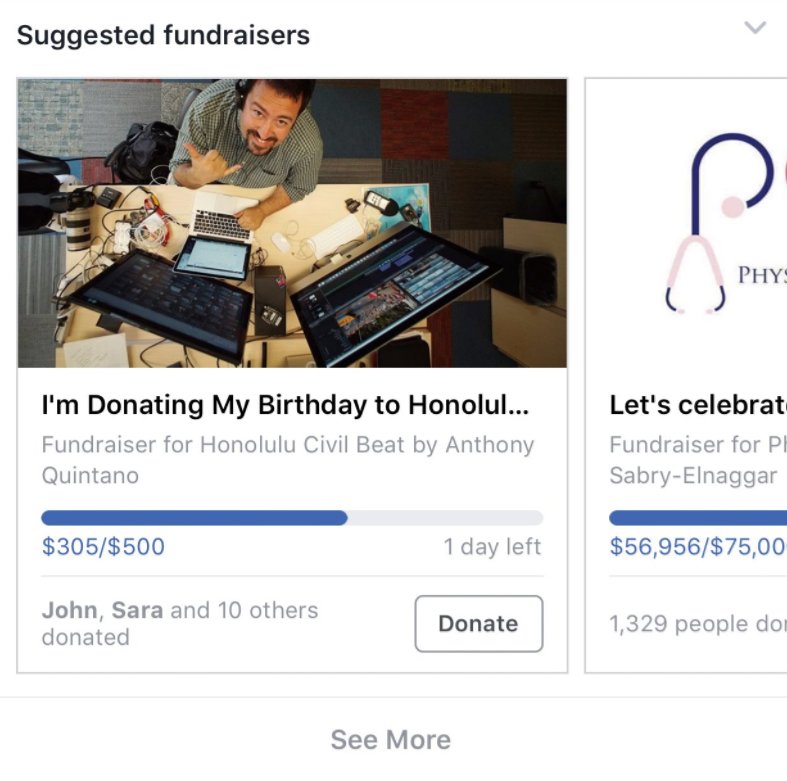 The notifications have appeared in some users' news feeds, showcasing causes which may be of relevance. It's an interesting idea, raising awareness of fundraisers in your network, which will no doubt get more people paying attention, and likely contributing.

This is an easy way for Facebook to use its platform for good, getting people more involved in important initiatives and supportive causes, which can ultimately help facilitate better connection and community - along the lines of Zuck's broader vision.

No word on a broader roll-out at this stage.

Not sure what all the ratio details and length restrictions are for Facebook's various video options? Looking to get a better idea of how you can use Facebook video to best effect, and for specific initiatives? 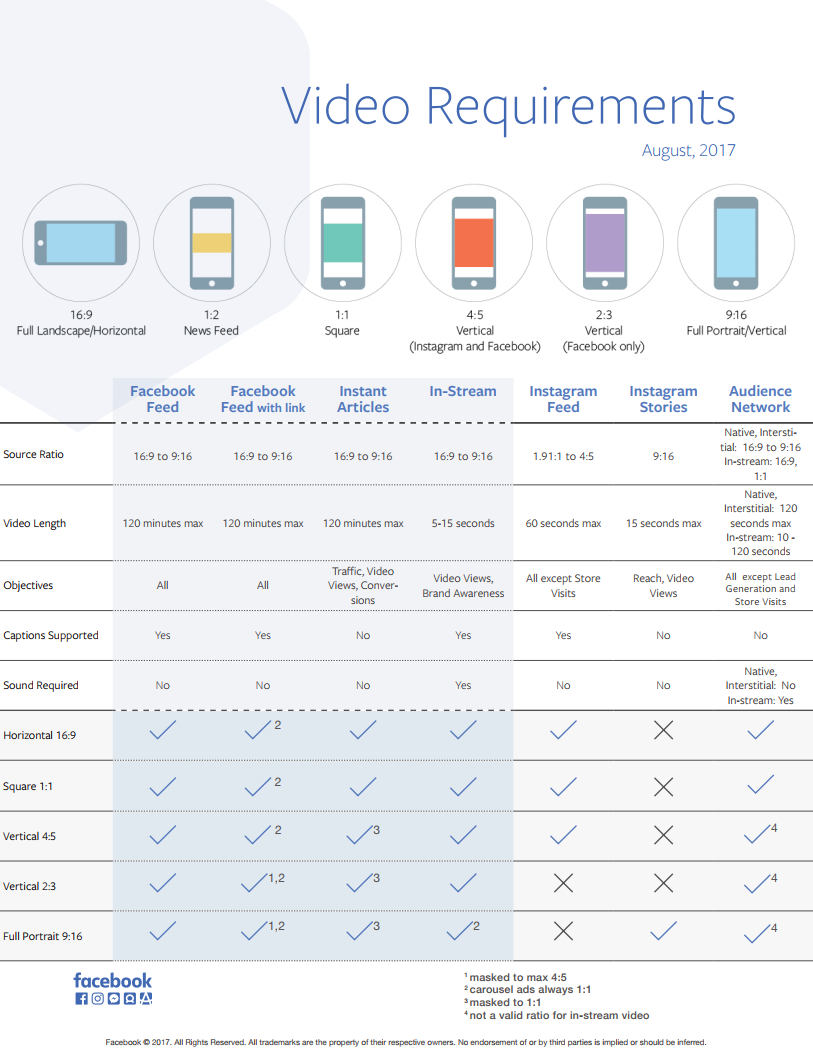 The full details of all Facebook's various video requirements are available on the Facebook Business Page, but this guide provides a key overview of the various options. Worth keeping on file.

Facebook's also trying out a new initiative which aims to facilitate real-life meet-ups by suggesting people you might want to catch up with.

It seems a little odd - how it works (according to Motherboard) is Facebook will factor in a range of things, like location, connection history, engagement, etc. The process takes into account all the various factors and then provides you with a listing of contacts you're connected with on Messenger who may or may not want to meet up with you this week. 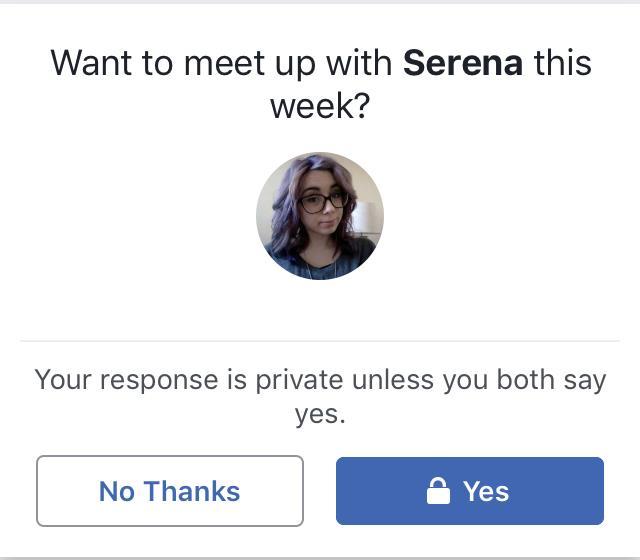 Other users are shown similar listings - and if both of you say yes, you'd like to meet up, Facebook lets you know so you can arrange a time.

It seems similar to Tinder, though the focus is not on dating so much as just everyday catching up.

"People often use Facebook to make plans with their friends, so we're running a very small test in the Facebook app to make that easier."

So, I guess it could be something. Maybe. The applications seem fairly limited - you already have the capacity to arrange a meet-up with friends you're connected with. But still, maybe the sort of passive prompting might help provide a bridge to more connection, and it may be useful for finding out when friends are in town visiting.

Facebook says they're conducting a test of the functionality amongst selected users in Canada and New Zealand.

Facebook Watch, their new, original video content platform, is now live for US users, and Facebook's also testing out various tweaks and tests of tools to help get users across to Watch, and to get them viewing more on-platform content.

As you can see, the notification lets you know about the latest Watch episodes you can catch up with, which is a good way to maintain awareness of Watch, and ideally, get viewers coming back. 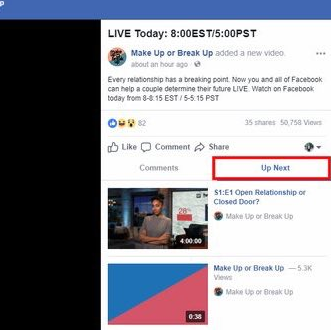 Both are designed to keep you watching, and both seem like fairly non-intrusive ideas that will undoubtedly help boost Watch viewing (and video content consumption more broadly).

Watch is a big deal for Facebook - The Social Network has outlaid a lot of money on original programming, and the opportunities to tap into traditional TV ad spend are significant, if they can make it work. As such, you can expect Facebook to test out a heap of promotional options and prompts like this as they expand Watch into more regions.

And the last Facebook update this week relates to Facebook's test of Canvas ads within Instagram Stories.

Marketing Land has reported that Facebook's testing Canvas ads as an extension of the current Instagram Stories ad offerings - users would swipe up on a Story ad and be taken to a Canvas, providing more ways for advertisers to maximize their Instagram ad usage.

Instagram, which now has more than 700 million users, has seen a rapid increase in active advertisers - jumping from 200,000 in February 2016 to more than a million just over 12 months later. In order to capitalize on that attention, the platform's looking to add in more creative ad options to help brands make the most of their efforts.

Canvas ads definitely provide new considerations. While Instagram's only testing the tool at this stage, it seems like a fairly safe bet that they'll get a broader roll out soon.