Instagram Now Up to 700 Million Monthly Active Users, Growing Faster Than Ever

Turns out, none of those have hurt the platform's growth - in fact, Instagram's growing faster than ever, now up to 700 million monthly active users. 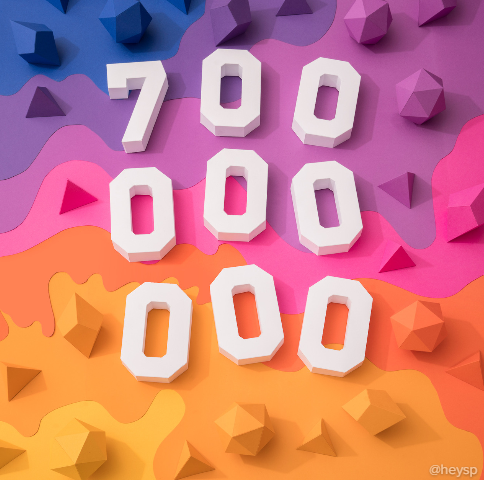 Instagram hit 600 million users back in December, meaning it's only taken them four months to add another 100 million. For comparison, Twitter has added 18 million in the past year, while Snapchat has 161 million users in total (as an aside, Snap's first earnings announcement next month, including user growth stats, will be very interesting).

That also means Instagram adoption is gaining momentum - it took six months for the app to go from 500 million MAU to 600 million, and nine months to rise from 400m to 500m. At this rate, Instagram should hit a billion users by about October - and again, this is with all these various additions and updates, stretching the use-case of what Instagram is and what people use it for.

That $1 billion investment Mark Zuckerberg made to buy the image-sharing platform back in 2012 is looking pretty good - Instagram's now valued in the vicinity of $50 billion.

And it's only getting bigger.

Instagram credits their continued innovation for helping drive growth, telling TechCrunch that the introduction of Instagram Stories in particular - which now has 200 million daily active users on its own - has definitely helped boost user growth and retention. Instagram's also put a focus on international growth, seeking to offer new, data-friendly options to help boost adoption in more regions, an aspect that Snapchat has thus far failed to capitalize on.

The app's momentum is a reminder of the potential of Instagram for advertisers - for which there's now a wide range of options available, the latest being ads within Stories, which the platform opened up to all marketers just last month. As the platform continues to expand, it's influence also grows - if you're not currently using Instagram to market your business, it's probably worth investigating the evolving use cases and conversation on the platform to see if your audience is active there.

Facebook's monthly 'Hot Topics' reports have reflected an increased parity in conversation topics across both Facebook and Instagram, underlining it's diversifying use case. Given the audience growth and expansion in options, it's definitely worth consideration.

On a scale of growth, the latest numbers clearly put Instagram up at the top of the list, and further increase Facebook's market dominance.

But of course, size isn't everything - as social platforms grow, and targeting options expand, we're evolving into a more focused mindset, honing in on the most relevant audience, as opposed to the biggest. But even then, scale is a factor - if your audience is active on Instagram, it's increasingly likely that you'll reach the most people engaged in related conversation on that platform.

Worth consideration in your planning process.