While Facebook Messenger users have been able to conduct video chats via the app since 2015, Facebook only added group video chats last December, providing a new way for people to use the platform to connect. And now, Facebook's looking to give Messenger video chats a boost, adding a range of new filters and effects to help spice up your Messenger video conversations.

First off, Facebook's added new animated emoji responses, which you can activate by tapping the 'thumbs up' icon at the bottom of your Messenger video screen.

"Choose one of the five Messenger emoji icons to amplify your emotions and express love, laughter, surprise, sadness or anger. These reactions will animate onto the screen and then disappear, so you can express yourself in the moment."

The reactions also function in different ways - when the camera is facing you, you'll get one variation, but when you're not on screen, an alternate response will be shown. This is similar to Snapchat's World Lenses, with many Lenses now available in front or outward facing mode.

Video filters have been available in Messenger since last year, but Facebook's now adding even more visual tools to help enhance your video chats. 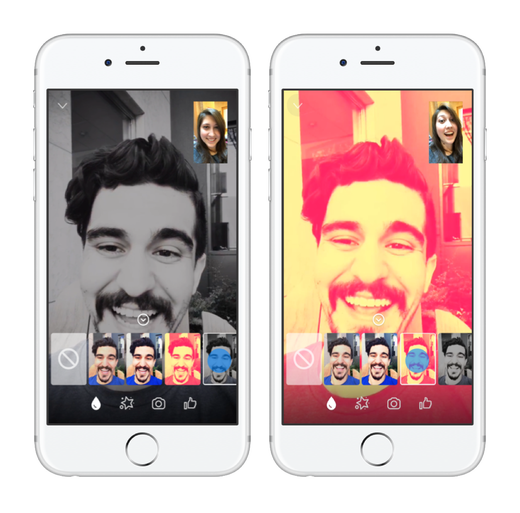 Facebook says the new color filters will help users better express their mood - while a great addition here is a preview, which will enable you to see what you look like with the filter applied before using it, via the picture-in-picture window down the bottom of the screen.

Facebook's also adding to their collection of Snapchat-style video masks (which can also be used in group video chats), while they'll also include more of Facebook's 'reactive tools' which respond to movement of your hands on screen.

Facebook hasn't said a lot about their reactive tools, but you can see an example of them here - when the user moves her finger on screen, the stars shift and move in response.

And the last new addition for Messenger video chats is the ability to easily take screenshots, with a new camera icon added to the function bar.

Group video chats have proven to be a popular option, with group live-streaming app Houseparty quickly racing to 1.2 million users late last year. This new photo feature, in particular, seems aligned to that trend, enabling Messenger group chatters to share images of the fun they're having, which may trigger others to get involved.

Video masks and effects have become a great way to encourage engagement - according to Snap Inc.'s data, a third of their 166 million daily active users "play with Lenses everyday". Lenses have also played a key part in helping spread the word about Snapchat, with users showing their friends what they look like, who then show their friends, etc. Facebook clearly sees this as a key trend - back in April, Mark Zuckerberg unveiled Facebook's new Camera Effects Platform, which will enable external developers to build all kinds of AR experiences, including video masks and effects. By opening up such options to outside creators, Facebook's looking to make itself the key platform for such tools - rather than relying on the creative skills of their own team, now, their creative team is everyone, a move which could give them a leg up on Snap Inc.

These new tools in Messenger further underline their advances on this front.