LinkedIn Adds 'Active Status' to Alert Your Connections When You're Online

LinkedIn has added another new feature to boost on-platform messaging - and given the app has seen some 240% growth in messages sent since the launch of their revamped mobile app, the focus on messaging makes sense.

Their latest messaging addition is called 'Active Status' and is currently being rolled out to all users. 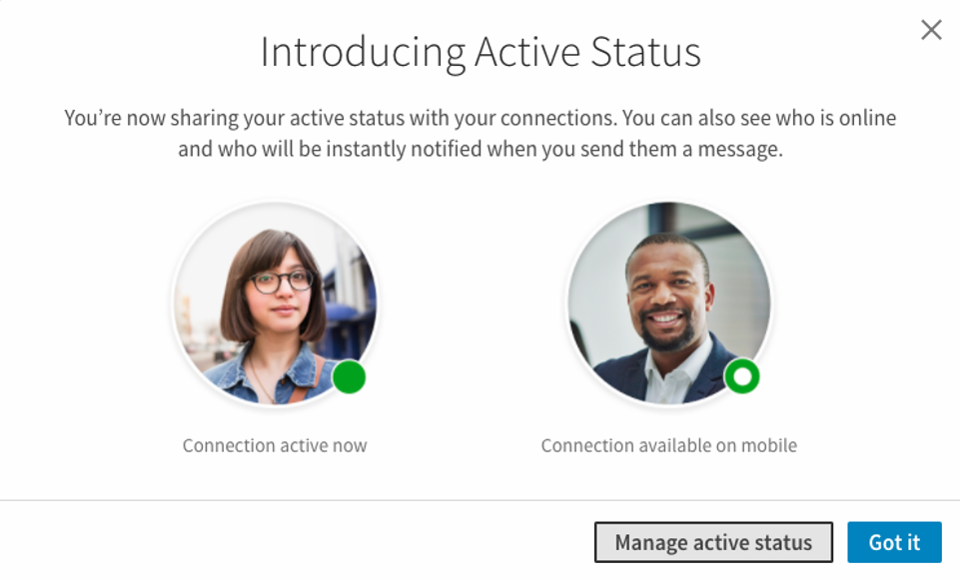 As is used on various other messaging platforms (most notably Facebook), Active Status will let your connections know when you're online by displaying a green dot at the bottom right of your profile image - a full dot when you're active on desktop, and a circle when you're on mobile.

And worth noting, Active Status will be activated by default. If you don't want people messaging you based on your activity, you'll need to switch it off (instructions here) - but if you do turn it off, you'll also lose the ability to see when your connections are active.

It's a small, but important addition, and it'll no doubt encourage more messaging activity on the platform.

As noted, LinkedIn's been working to improve their messaging experience with a range of new tools and additions of late, including 'Conversation Starters', which provide users with prompts to help initiate interactions with other members, a new option to message users direct from any post in your feed, and Quick Replies, which make it easier to respond on the go.

LinkedIn also recently added new contextual functionality to their messaging system, enabling it to highlight relevant connections to get in touch with when you look at a job listing or company page, while they're also developing an AI powered 'Inbot' system, which they envision as being their own version of a personal assistant, operating within LinkedIn messaging.

Active Status adds to this, providing another push to spark conversation between users. It seems like a logical move, and, along with the addition of video, also sees LinkedIn moving further into line with other social apps.