Facebook has announced the date of its 2021 Communities Summit, with the virtual event set to be held on November 4th, where Facebook will bring together moderators from various Facebook groups, in order to provide insights and tips, and share previews of upcoming tools and features.

“The Facebook Communities Summit is an opportunity to bring together community builders from around the world so they can connect with one another, hear from our executives about the latest product features and learn from each other’s experiences. This year, FCS will be hosted virtually and we will showcase our latest products that will empower group members and admins to build meaningful and impactful communities and highlight those making a difference across the world.”

These may get focus at the November event, while Facebook could also look to announce even more groups options to assist in effective management, and keep building usage of one the platform’s key engagement options.

In addition to this, Facebook’s also launching a new ‘Community Awards’ program, which will further highlight the work that moderators do to build and maintain their communities. 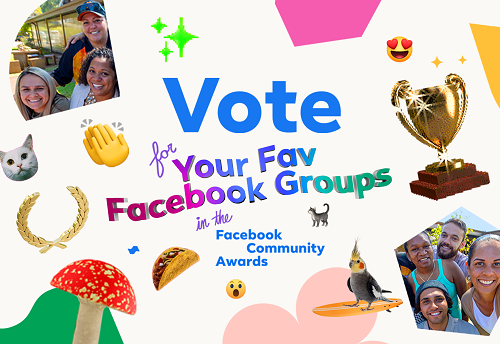 “The first-ever Facebook Community Awards feature 22 nominees across seven categories, who are doing meaningful work by inspiring others, making an impact and bringing people together across various interests and topics.”

Seven winners will each receive $50k, as well as support from Facebook to further grow their communities.

“To help select the winners, we want to give people a chance to hear their stories and vote for their favorites. Vote for who you find the most inspiring here. Voting is available on mobile devices and is open from October 7 - October 22. Limited to one vote per category per person. Award winners will be announced at the Facebook Communities Summit.”

As noted, groups, at 1.8 billion active users, remains one of Facebook’s key elements, and as such, Facebook needs to do all that it can to maintain group activity, and keep people coming back more often.

In fact, in recent times, groups have become even more important, with people moving away from public sharing, and the backlash that can come with such, and towards more private discussion among more sympathetic, like-minded communities.

The COVID situation has made group activity even more resonant, and while that does also lead to concerns around filter bubbles, and even radicalization for some, for many others, Facebook groups are a key social connector, on many critical aspects.

You can learn more about the Facebook Communities Summit, and RSVP to the event here, while you’ll also be able to tune in to all the Summit events on the Facebook App Facebook Page.