Facebook Launches Test of New, Clubhouse-Like App as it Looks for Angles on the Audio Social Trend

Facebook's experimental NPE team has released yet another new app, this time focused on the rising interest in audio social, though with addition of alternate elements to hopefully enhance the engagement process.

Today, NPE has launched a beta test of 'Hotline', a web-based app that incorporates the engagement features of Clubhouse with more visual and text tools, including optional video streaming for hosts and speakers.

As you can see in this GIF, the layout of Hotline is similar to Clubhouse, with speakers displayed in bubble icons, and listeners listed below (you can see the listener icons at the bottom of the second screen). Above the listener icons is a display of questions that people have asked in text form, which participants are also able to up and downvote as the broadcast goes on.

That could be a big help in directing the flow of the discussion, while having the option both join the conversation as a guest in order to ask a question, or post text-based queries while tuning in, further opens the format up for more engagement from users who may not want to participate with their voice. 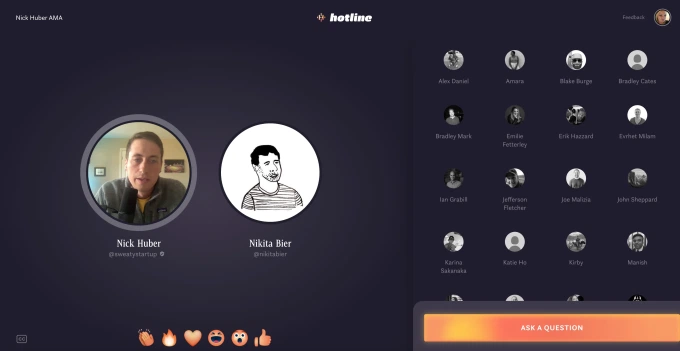 But essentially, it is another Clubhouse clone to add to the list - though if Facebook can find a different angle to the function, it could help to boost its own ambitions on the same, with the company already developing an audio rooms feature that replicates the basic Clubhouse UI.

And Hotline also incorporates one other key function of interest - each session is recorded.

"After the event, the host will receive two recordings of the session - one as an mp3 and another as an mp4. The creator can then upload these to other networks, like YouTube or Facebook, edit them into short-form content for apps like TikTok or turn the audio recording into a podcast, or anything else."

That could be another helpful twist, increasing the value of the broadcasts by enabling broader usage of the content.

But is that what people want?

Part of the appeal of Clubhouse and other audio social tools is their 'in-the-moment' nature, with many speculating that this type of off-the-cuff interaction has helped fill the gap left by the absence of in-person events. The concern for such tools is that once we can go back to face-to-face meet-ups, their value will diminish, which further points to that serendipitous element - but then again, the capacity to re-use the streams from such in podcasts, audio snippets, promos... There could be a lot of untapped value there.

The addition of optional video for speakers has also been considered by Twitter, and with its audio Spaces platform built on the back of its Periscope infrastructure, facilitating such would not be a stretch. But thus far, it's decided not to include video.

Maybe, inadvertently, Facebook's latest test could help Twitter decide whether it too should add the option.

Facebook provided this statement on Hotline, and the focus for its development:

“With Hotline, we’re hoping to understand how interactive, live multimedia Q&As can help people learn from experts in areas like professional skills, just as it helps those experts build their businesses.”

So it's also aiming for a slightly different market than Clubhouse's more broad appeal - but then again, Clubhouse usage has largely centered around similar elements anyway. Which is also why LinkedIn is developing its own audio social tool.

Essentially, Hotline is a test to see what users really want from audio social platforms, and whether adding more tools could boost their utility - or whether the stripped-back nature of the format is a key part of its appeal.

It's the thirteenth app launched by Facebook's NPE team over the last 18 months, with each experiment seeking to find new ways to boost engagement, and solidify Facebook's overall offerings. Some of these apps have already been shut down, but Facebook is still supporting most - which likely suggests that it is seeing some signs of promise from the varying options.

Hotline will be another test, and looking at the enhancements here, it could actually prove to be a winner, and help Facebook formulate a better audio social option.

Hotline is in limited test mode at present.