With Pinterest reportedly considering an IPO for later in the year, Google has this week taken a shot at the platform's core offering by announcing a new product discovery option which will enable brands to reach consumers who are searching via Google Images. 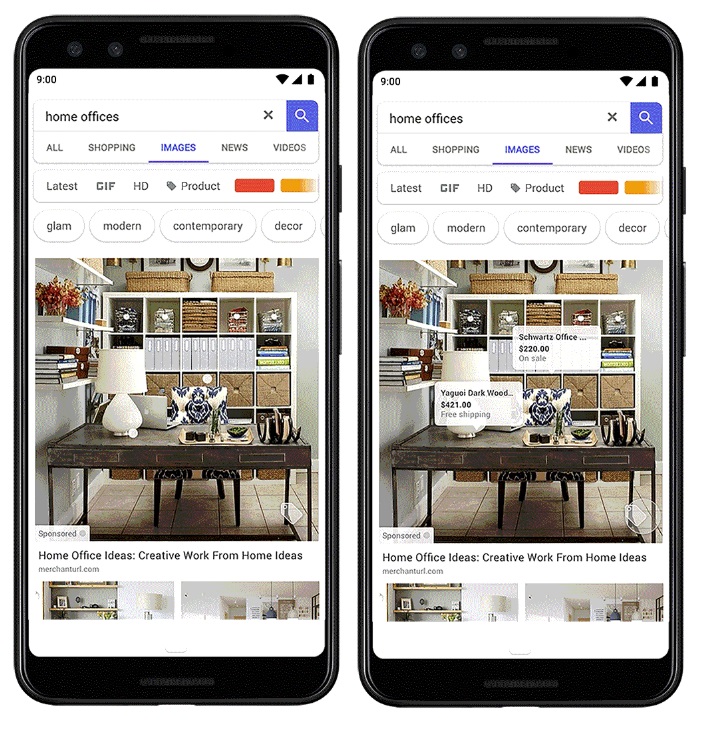 As explained by Google, the new "shoppable ads on Google Images" will enable businesses to highlight multiple products available for sale within their sponsored ad, which will appear among targeted Google Images results (you can see the small 'sponsored' tag in the bottom left of the image above). Users will be able to tap on the shopping tag icon in the bottom right of the image to see the detail on any buyable items within the frame.

Google says that it's currently testing the option with a small subset of queries related to searches like “home office ideas”, “shower tile designs”, and “abstract art”.

"Let’s say a shopper is searching for home office ideas on her mobile device or desktop and goes to Google Images to explore ideas around how to organize her room. She can scroll through the images, hover over any sponsored ad with the price tag, and see the items for sale in the image -- along with prices, the brand, and more. We’ll continue to roll this out to more categories across more retailers over the next few months."

That's because Pinterest rolled out almost the exact same thing three years ago, via its own product identification and shopping tags.

Pinterest has continued to refine and update it's visual discovery offerings - most recently through the automation of its 'Shop the Look' Pins - and that visual search capacity has become key to the platform's evolving tools, helping users find and purchase relevant items, based purely on visual cues and similarities.

Instagram, too, has been rolling out the same, with its own variation of shopping tags - which, more recently, it also added to Instagram Stories.

Google's version is more advertiser specific than Pinterest's, which makes it more akin to Instagram's variation, but the idea is essentially the same. With more people searching for items via Google Images, brands will now have a way to reach them, which will no doubt appeal to a lot of businesses, particularly those within the categories listed in Google's test.

Indeed, statistics show that visual search usage is rising, with more consumers becoming accustomed to being able to use their mobile devices to look for things via image match, which can be particularly handy for price match and interest-based queries. Given this, Google's addition makes a lot of sense, while it'll also enable the search giant to fend off rising competition for the same from other providers.

Furthering this, Google also notes that an increasing number of advertisers are now using the platform's "Showcase Shopping ads", which enable brands to promote their products via highlighted feeds. Given the rising interest in the option for other formats, Google is now also bringing its Showcase Shopping tool to relevant Google Image queries as well, which will enable brands to add 'social-like' feeds that occupy prime real estate near the top of the screen. 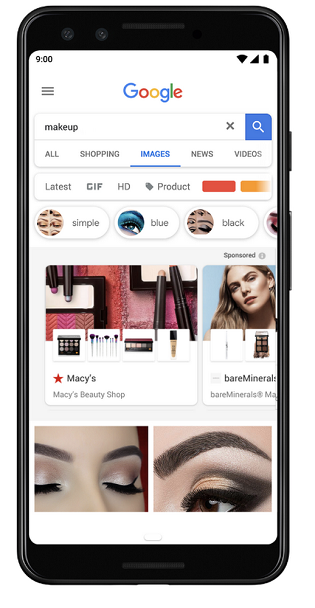 Google's also offering new ways for brands to upload more of their product information, which will enable Google to further showcase relevant product matches and details within relevant search queries.

Is that a concern for Pinterest - the fact that Google could potentially rain on its IPO parade by rolling out similar tools as it already has, and providing them to much larger audiences, who are already heading to Google for their search queries? It'd certainly have to be a consideration, one of the key risks noted in the platform's initial filing. If Google were to see Pinterest as a genuine threat for a significant amount of search queries, it could look to ramp up its efforts on this front, and optimize its visual search tools to stem the tide, and promote its own options as the best place for product discovery.

But at the moment, Pinterest is actually better placed in this regard. Pinterest's entire focus is on product searches, and its tools have been developed to align with that specific usage. That's why Instagram's eCommerce efforts are also not a major concern for Pinterest, a least not at this stage, because Pinterest's long-term focus has been on this core functionality, and it'll take a while for others to catch up.

But they could, indeed, catch up. Both Google and Instagram have indicated that they're working on similar tools, that on-platform shopping will be a key option for them. And both have far more users than Pinterest, which is currently at 250 million monthly actives.

The concern for Pinterest is that these larger providers could be waiting for it to list in order to exert more pressure, squeezing the company after it comes under the watchful eyes of the market. That would then make it harder for Pinterest to grow - we've seen similar in Facebook's tactics to suppress Snapchat since Snapchat went public.

Again, Pinterest will likely note these risks in its documentation, but it'll be interesting to see whether the expected Pinterest IPO leads to a ramp up in similar visual search and eCommerce offerings from Google and Facebook (through Instagram), and what that means for the platform moving forward.