Instagram is testing a new option which will enable users to report misinformation on the platform, the latest in Facebook's broader efforts to slow the spread of fake and misleading content across its platforms. 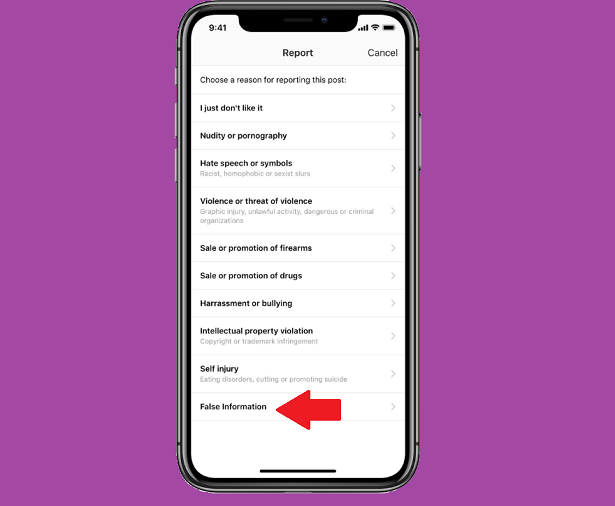 As you can see in this example screenshot - shared by social media expert Matt Navarra - under the test, a new option has been added to your reporting tools on an Instagram post.

When you tap on the three dots at the top right of a post, and you select 'Report', you have two options to choose from - 'It's Spam' or 'It's Inappropriate'. If you select 'It's Inappropriate', you will be taken to this separate reporting flow, where 'False Information' will now be added as an option, at least for those in the test pool.

"From the end of August, people will be able to let us know about content that people believe may be misinformation and help improve our ability to proactively catch misinformation. When we find misinformation on Instagram, we filter it from places where people discover new content - Explore and hashtag pages."

The process will expand Instagram's options for detection, and as noted, build on parent-company Facebook's broader capacity to limit the spread of such through its platforms.

In a somewhat related note, Instagram is also investigating increased instances of disingenuous users viewing people's Instagram Stories as a growth-hacking tactic, with many people reporting in influx of Russian-based accounts checking out their publicly shared content.

As reported by TechCrunch, Instagram is aware of people and brands using the tactic, which, in some cases, involves accounts paying third parties to boost their profile by viewing people's Instagram Stories, in the hopes that those users will check out these viewers and subsequently follow the accounts, artificially inflating their audience numbers.

Essentially, it's a variant of the age-old social media 'follow-for-follow' tactic, which has lessened in recent times, but had been used by many on Twitter, in particular, to massively inflate their presence.

"Instagram has confirmed that it is attempting to crack down, saying it’s working to try to get rid of this latest eyeball-faking flavor of inauthentic activity. (We paraphrase.) It also said that, in the coming months, it will introduce new measures to reduce such activity - specifically from Stories - but without saying exactly what these will be."

Instagram didn't comment specifically on the rising instances of Russian account activity in this respect, but if you're using this as a 'tactic' to try and boost your Instagram presence, it's worth noting that you may come under scrutiny at some stage.

Both elements will help to clean up the platform, eliminating damaging forms of inauthentic activity. Fake and misleading news is obviously a more significant concern in general terms, but the rising use of influencer marketing on Instagram also means that the platform needs to ensure its metrics and stats are accurate, in order to stop fakers taking money from brands.

Expect more action on both fronts in the coming months.