Aside from a level of backlash over its recent decision to suspend the account of US President Donald Trump, Facebook is also dealing with another user revolt, this time related to the way it tracks user data, and concerns around potential misuse.

Last week, WhatsApp announced an update to its 'terms and privacy policy', which is mandatory for all users to accept in order to continue using the app.

The part that has most users spooked is the last point - 'How we partner with Facebook to offer integrations across the Facebook Company products'.

Many have taken this to mean that WhatsApp will now share all of its user data with Facebook, which many WhatsApp users, who initially chose the app due its privacy focus, are not happy about.

And that cohort includes at least one particularly high-profile personality.

Whether it was the update alone, or Musk's tweet, a lot of users have indeed been looking to switch apps following the announcement. Telegram tweeted that it had seen a surge of 25 million more users within the last three days, while the Musk-preferred Signal has also been rising up the download charts.

Several messaging apps have also taken the opportunity to further amplify user concerns, and promote themselves as a safer alternative.

Providing a secure and private messaging and calling platform has always been a top priority for us, and this will never change.#privacymatters

WhatsApp's the most used messaging app in the world, with over 2 billion active users - 459 million in India alone. Surely, given the app's ubiquity and growth, most people will just accept the new privacy terms and move on, even amid some level of confusion over how their data is shared.

Evidently, the backlash has been significant, as various Facebook executives have taken to Twitter to alleviate concerns and explain that the update does not mean that your personal WhatsApp info will be shared with Facebook.

There is a lot of misinformation about the WhatsApp ToS right now. The policy update does *not* affect the privacy of your messages with friends or family in any way. The changes are related to messaging a business on WhatsApp, which is optional. https://t.co/b7szUeinKX

I know there are a bunch of questions about WhatsApp’s policy changes. Here are some clarifying points: https://t.co/JXMjmnik8W

I've been watching a bunch of discussion this week about the privacy policy update we’re in the process of making @WhatsApp and wanted to share some thoughts.

In addition to this, WhatsApp has also published a new blog post which underlines that the update will not see your private messaging data shared with Facebook. 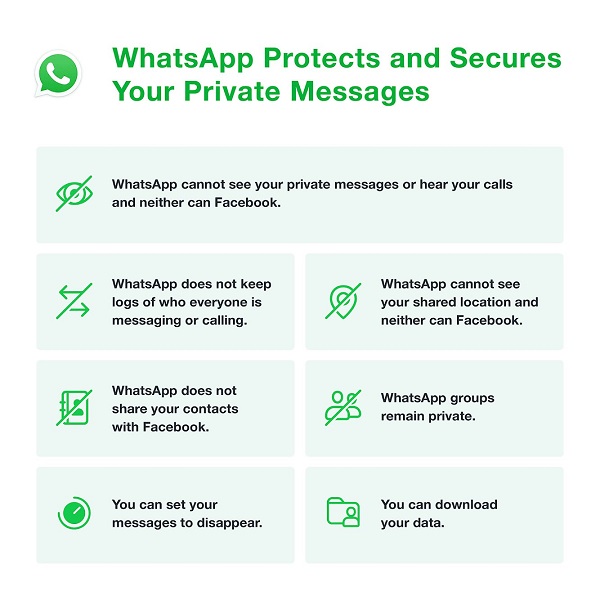 "This update includes changes related to messaging a business on WhatsApp, which is optional, and provides further transparency about how we collect and use data. We can’t see your private messages or hear your calls, and neither can Facebook: Neither WhatsApp nor Facebook can read your messages or hear your calls with your friends, family, and co-workers on WhatsApp."

As you can see in the graphic above, the change also won't enable WhatsApp to store user location data or share people's contact information with Facebook, contrary to some reports. Facebook and WhatsApp will share more data around transactions and business interactions, in order to improve its customer service and ad tools. But your personal WhatsApp info will remain separate.

Will that explanation be enough to appease concerned users?

Probably not, and along with Facebook's track record on data usage (see: Cambridge Analytica), and the added reports swirling about Facebook being most impacted by Apple's coming IDFA update due to the vast amount of data it's apps track, it's not a great time for Facebook to be confronted with a data privacy crisis.

But then again, when is? And either way, Facebook needs to update its permissions in WhatsApp to facilitate its broader messaging integration plan, which is still in progress. This update, in particular, relates to its expanded eCommerce push, which is particularly important in India, where, as noted, WhatsApp is the most used messaging platform.

The blowback likely won't hurt WhatsApp in the long run, and it's difficult to say how much of the rise in popularity of other messaging apps is because ot Trump, IDFA, etc. But clearly, Facebook is concerned, which is worthy of note, with respect to usage shifts.

If enough people move their messaging networks, that could become a problem, which, at WhatsApp's scale seems unlikely. But maybe, a new, significant messaging player could emerge from the ashes of this period, as a result of user migration.