By now you've probably heard that video is important - video content generates more engagement, better response, enhances brand relationships, etc. There's no shortage of data reports and research papers outlining the relevance of video in digital marketing, and now Facebook has conducted another study into the effectiveness of video, this time focused on biometric analysis among users in the UK and UAE.

And their results highlight some important considerations - in examining viewer responses to video content, Facebook's research team has identified five core factors related to the rise of online video viewing.

Here are their findings, along with notes on why each is important and needs to be factored into your content planning.

As outlined by Facebook research head Greta Basich, their data shows that smartphones are by far the most popular device for watching online video, and that smartphone users are much more likely to consume online video daily than desktop users.

The key note here, of course, is that your content needs to be optimized for mobile - but really, you probably don't need another research report to underline this.

The mobile shift is a huge factor in digital marketing, and all businesses need to be considering how their websites and content display on mobile devices, including video posts. To some degree, you have limited control over how your video is displayed, as that's predicated by the platform, the device each person is using, even their personal preference. But it is important to factor in how and where people are consuming content, what their surrounding context might be, and how you video relates.

And another growing consideration - Facebook recently announced enhancements to the way vertical video is displayed on the platform.

While many video experts frown upon the vertical format (as it generally lowers the overall video quality), the fact is that a rising number of consumers are viewing video this way - and with Facebook vertical videos expanding to full-screen, as shown above, that more immersive format can have its benefits.

These types of presentation considerations will also become more pronounced as newer formats like 360 video come into play - how can you use these new options to create the most immersive, engaging content to really capture audience attention?

Facebook's research also shows that the majority of people - up to 77% of participants - prefer short-form content to long-form. In this context, Facebook considers short-form videos to be under 10 minutes in length, so the definition is probably a bit wider than your normal perception of short vs long, but either way, the data once again underlines the importance of factoring in shorter videos and how you can deliver a resonant message in a more condensed, concise way.

There's some debate over attention spans and whether they're in decline to the levels that some suggest - some reports show that long-form content is still as resonant as ever, while others point to short posts being the only way to go.

Really, this will come down to your own target audience and what they respond best to, and to determine this, you need to experiment and see what works. Definitely, some argument can be made that short form content performs better on mobile because people are catching it as they go about their daily life, but then again, if the video is compelling and draws people in, the length is largely irrelevant. People will watch if it connects with them and provides them with what they want.

In addition to this, Facebook's research also showed that Millennial users, in particular, find it easier to focus on video content on mobile, as opposed to on a desktop PC.

Binge-watching online video content is a newer trend that Facebook's research identified, noting that up to 65% of Millennials now watch large numbers of video clips in a row, many doing so without consciously thinking about it.

This is a bit of a chicken and egg development - has binge-watching videos like this become a habit because of user behavior, or because video platforms, lead by YouTube, have implemented concurrent autoplay, where a new video will start playing automatically after one ends, thereby causing the shift?

Regardless, Facebook now utilizes the same - they added concurrent play to their video content back in 2015 and are now looking to build on that with their new video tab, which will highlight relevant videos to you based on your interests and connections. Twitter too is trying out a dedicated 'Top videos for you' tab, which also auto-advances through relevant video content.

From a marketing perspective, this is more an interesting trend than something you can actively tap into, though it may relate in terms of episodic-type content - that users are more likely to watch through each video in a sequence.

It also stands to reason that ads inserted between videos in these sequences - similar to how Instagram's Stories ads work - could also get more attention as users become more used to just letting videos play through.

This is an interesting one - Facebook's researchers found that video on Instagram triggered 1.8x higher levels of joy amongst participants than the same content on other platforms.

The researchers note this as a contextual consideration - that people want to see content they can connect with personally, which is why video on Instagram, where people tend to go to look through beautiful pictures, as a form of escapism, resonates more.

The message here is pretty clear - if you're marketing on Instagram, videos which enhance your brand message can resonate significantly more than static content. If you're not using Instagram video, you could be missing out on a significant opportunity.

And the last element of Facebook's report identified the attention-grabbing nature of video.

As explained by Basich:

In addition, the researchers also found that 360 video can increase people's level of joy 1.4x more than standard video content. 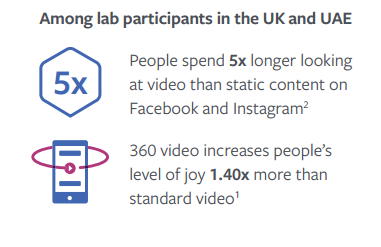 The key message here - that video is more resonant than static content - is something which, as noted, has been highlighted by a wide variety of research reports, but the additional note on cinemagraphs (which would likely also relates to GIFs), reinforces the increased power of moving content, and why all brands should be considering it within their content process.

In addition, 360 content is going to become a bigger focus, and given its immersive nature, it's not surprising that it triggers higher levels of mental stimulation and response. The brands that can get in early and do 360 videos well will be well placed to capitalize on this increased value.

Overall, this new report largely reinforces a lot of what we already know or suspect, but the finer details underline the more minute value of video, and the important reasons why you need to consider video content in your social marketing process.

You can read the full "Moving Pictures: The Persuasive Power of Video" report here.