One of the biggest challenges for live-streaming thus far has been that creating quality, highly viewed live-stream content is actually really hard.

There's a reason that the same celebrities and hosts always end up on live TV broadcasts - the ability to present live in a responsive, engaging way is not something that comes naturally for everyone. The end result of this is that live-stream content ends up being boring, fewer viewers tune in, less often and the whole eco-system fails because audiences have no real motivation to keep coming back for more.

This is what killed both Blab and Meerkat, and is a problem that Facebook and Twitter are working to address by signing up live TV deals and broadcasters to draw more of a crowd to the platform (it's also why Facebook has been paying high-profile users to share live-stream content).

But another key way that the platforms could up the quality of live-streaming is monetization. If they can work out a way to incentivize high quality creators to broadcast more often, that's another option to get more users watching live-streams more often - similar to how YouTube has helped their best creators turn their channels into multi-million dollar careers.

Say what you want about PewDiePie (particularly in light of his recent issues), but the guy draws a crowd - he has more than 53 million subscribers and regularly hits 10m+ views with his posts. Facebook and Twitter would love to be generating even a percentage of those numbers with their top live creators.

In line with this, Facebook has announced a new monetization option for live-streamers, adding a new dollar sign icon which the broadcaster can tap to add in a commercial during a live-stream.

Of course, there are some limitations on this.

"When a broadcaster chooses to take an ad break, people watching the video will see an in-stream ad of up to 15 seconds in length. The broadcaster will earn a share of the resulting ad revenue."

The revenue split here is 55% to the creator and 45% to Facebook. Here's an example of what the new video ads look like: 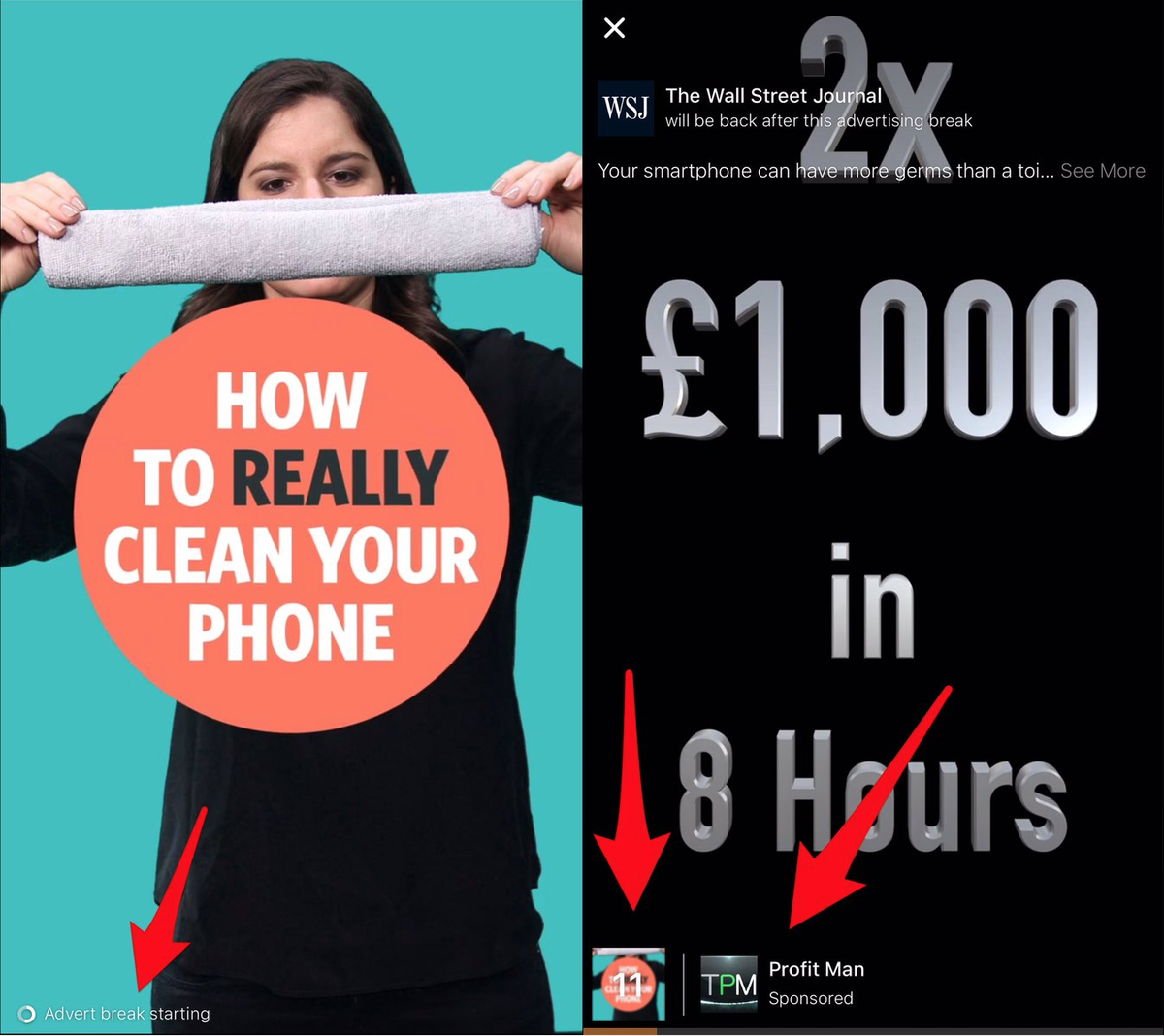 Live ad breaks have been in testing with a small group of creators over the past few months, but now Facebook's extending it to Pages and Profiles who have at least 2,000 followers and who've attracted at least 300 concurrent viewers to a Facebook Live broadcast within the past month. The expansion is also limited to US users only at this stage.

For those that meet the requirements, they'll be able to insert an ad break into their live-stream by, as noted, pressing the dollar sign icon in the Live composer window. You can take your first ad break after having been live for at least four minutes, with additional breaks requiring a minimum of five minutes between each. Each ad break can last up to 20 seconds, maximum.

And while you do need to have 300 concurrent viewers to qualify, you don't have to maintain that audience to run subsequent ads - if you have more than 300 viewers for the first ad, but then less than 300 at the next eligible ad point, you can still run another commercial.

It's an interesting consideration for broadcasters - up till now there hasn't been an option for them to generate direct revenue from their Live content. Adding the ability to monetize their streams could provide more incentive for top creators to focus more of their time and effort on their videos, which could see better quality content flowing through Facebook's network more often, building a more sustainable Live eco-system.

It's worth noting here too that YouTube's working on another avenue for live-streamers to generate revenue, with their new Super Chat option that enables live-stream viewers to pay to sponsor their questions in stream to give them more visibility.

That process has proven highly successful in China, where live-streaming has taken off in a big way, but the same system hasn't been as popular on YouNow and Twitch, which have provided similar for some time. Facebook's built a similar payment process into the back-end of Facebook Live, but there's been no word on whether they'll actually implement it - they'll likely see how the option takes off before considering whether it fits with their Live offering.

In addition to this, Facebook's also announced that they're expanding their testing of mid-roll ads in uploaded videos. Facebook announced the addition of mid-roll video ads last month, with ads to be made available on video clips that are at least 90 seconds long (with the ads themselves limited to 15 seconds in length).

And while mid-roll ads will provide a new benefit for publishers, at present, advertisers will have limited control over where their ads are placed.

As explained by Marketing Land:

"Advertisers can use Facebook's standard targeting options to pick out the audiences they want to see their ads, but they can't pick out the specific publishers or videos in which they want those ads to appear. They can block their ads from appearing within certain types of content, but are only provided three categories to choose from: "debated social issues," "mature audiences" and "tragedy and conflict."

Facebook's also announced that they're making in-stream video available to all eligible Audience Network publishers, which places ads from Facebook's advertisers onto third-party websites and apps.

But the big one here is obviously live ads. Facebook's put big emphasis on live-streaming, and while it hasn't become the all-conquering option some envisioned when Meerkat first took over SXSW back in 2015, it has become an essential part of the wider social media experience. And with Facebook looking to go all in on video (before eventually evolving to social VR), the emphasis on Live makes sense - they just need to make it a more compelling, more essential option, with a steady stream of high-quality content that people want to tune in for.

All of these steps shift slightly closer to those wider goals. It'll be interesting to see how viewers respond, an if we start to see any live-stream stars emerge as a result.