Given that the majority of LinkedIn users now access the platform via mobile device , the professional social network has made mobile functionality their key focus, with their recent platform re-design and re-structure built to be mobile first, a significant shift in approach.

And that makes sense - last year, LinkedIn CEO Jeff Weiner noted that mobile usage was growing at a 3x faster rate than overall member activity, while they'd also seen significant increases in engagement, content sharing and messaging, all on the back of their mobile app re-fresh, which was launched in December 2015.

As with most platforms, mobile is now the way forward for LinkedIn - it may have taken a little longer for the professional social network to see the broader impact of the mobile shift, but now, their app is clearly their focal point. And the platform's ad offerings are now also moving to align with this approach.

On this, LinkedIn has this week announced the addition of lead generation forms, a new ad offering which will enable advertisers to more easily collect information from users, with the data auto-populated based on their LinkedIn profile.

As you can see, the process is simple - the new lead gen ads will come with a 'Sign up' button and will auto-populate the user data for quick connection. After form submission, advertisers will be able to show an in-app 'Thank you' page, with an option to immediately connect the user to relevant content or send them to a website to learn more.

Of course, the concept of lead gen ads is nothing new - Facebook's offered similar since 2015, while Twitter actually announced that they were removing their own lead gen ad option last December (Twitter originally launched lead gen ads back in 2013). But LinkedIn's audience is unique, with a specific focus on professionals and businesspeople, a market which may actually deliver better response for lead gen cards as they could be more inclined to sign up for whitepapers and industry research.

LinkedIn also notes that another key benefit of their lead gen offering is data accuracy:

"Because this lead data comes from the member's up-to-date LinkedIn profile, it is typically more accurate and complete than what you'd get from traditional website forms -- where people can enter false or partial information." 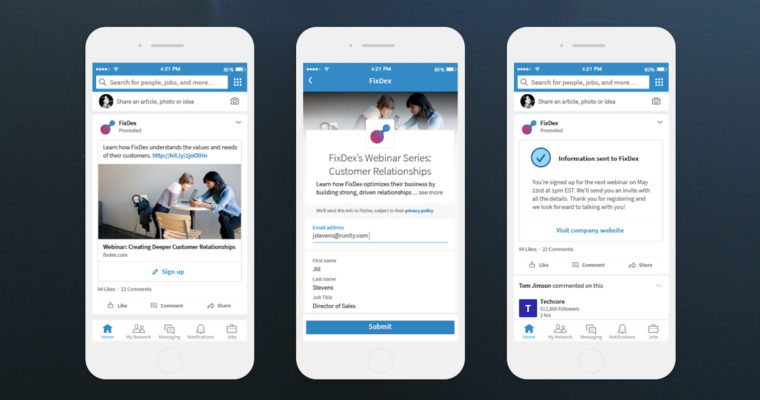 LinkedIn also reports that 90% of the brands who participated in their pilot program for lead gen ads beat their cost-per-lead (CPL) goals and saw lower CPLs than they did with standard Sponsored Content campaigns. Of course, individual results will vary, but it's another consideration for your LinkedIn outreach strategy - and with 80% of LinkedIn member engagement with Sponsored Content happening on smartphones, providing a more streamlined data collection process could be a good option.

At launch, lead gen forms will only be served on the LinkedIn mobile app, though LinkedIn notes that they are looking to expand them to desktop in the coming months.

"We'll also let advertisers use Lead Gen Forms on Sponsored InMail campaigns, for both mobile and desktop, later this year."

LinkedIn's also looking for provide data on CPL, form fill rate and demographic insights in the near future.

You can get more information on LinkedIn Lead Gen ads here