Snapchat vs Instagram - Which Platform is Better for Your Brand?

Snapchat vs. Instagram: A rivalry as old as time. Well, almost.

There have been a lot of discussion this year about who'll eventually win the battle between the two social media giants, and while out of the gate it looked like Snapchat would eventually be declared the victor, Instagram has been leading a charge to take some of Snapchat's best features and... well, copy them.

However you slice it, these two platforms are what many think are the future of social media. In this post, we want to break down what each platform is, and more importantly, what it can offer to brands who are looking to connect with their ideal consumers.

As of the end of 2016, Snapchat is seeing 150 million active users every day. They're also reportedly serving 10 billion daily video views, while users, on average, are logged into Snapchat for 30 minutes every day.

Instagram, meanwhile, now has more than 600 million registered users, with more than 300 million of them logging into the app daily. For brands looking for engagement, it doesn't get much better than that, especially among the younger populations.

Both Snapchat and Instagram have major appeal among people users age 35 and under - researchers have found that up to 90% of Instagram's users are 35 and under, while 86% of Snapchat users are under the age of 34.

Which Platform Do Millenials Prefer?

Wishbone recently conducted a survey asking users between the ages of 12 and 25 (the coveted heart of the Millennial target group) which they preferred, Snapchat or Instagram. Here are their decidedly unscientific, yet still interesting, results: 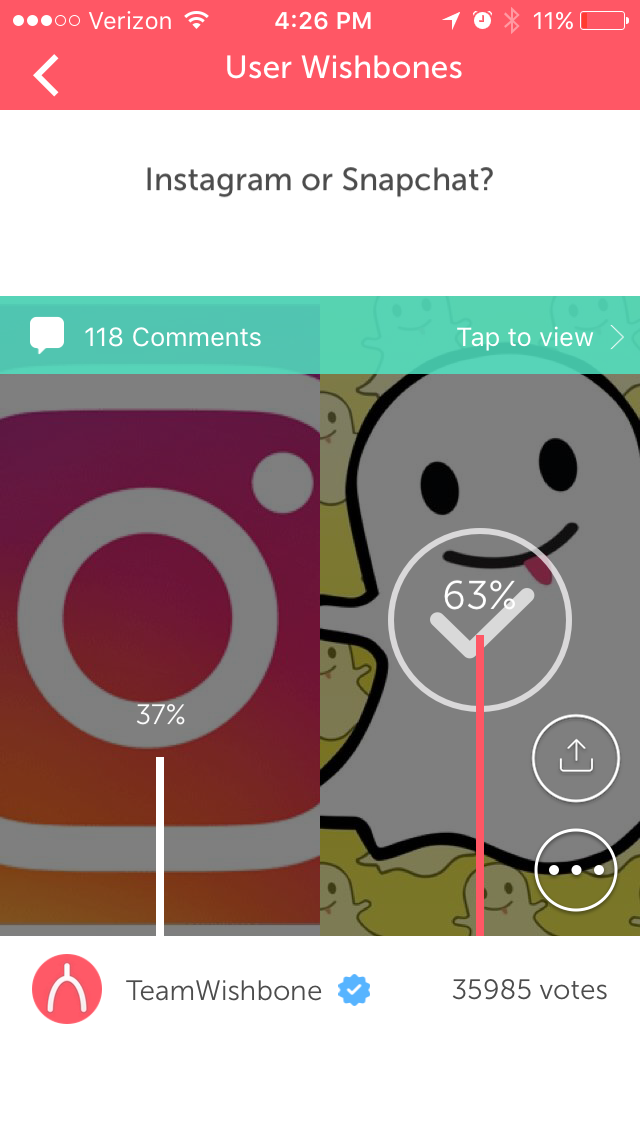 With almost 36,000 votes, Snapchat won a decisive victory in this group - though there were a couple of interesting findings in the subsequent data:

It shouldn't be too much of a surprise to imagine that Instagram could be working on that very feature now given parent company Facebook's fairly blatant attempts at copying Snapchat's core features. 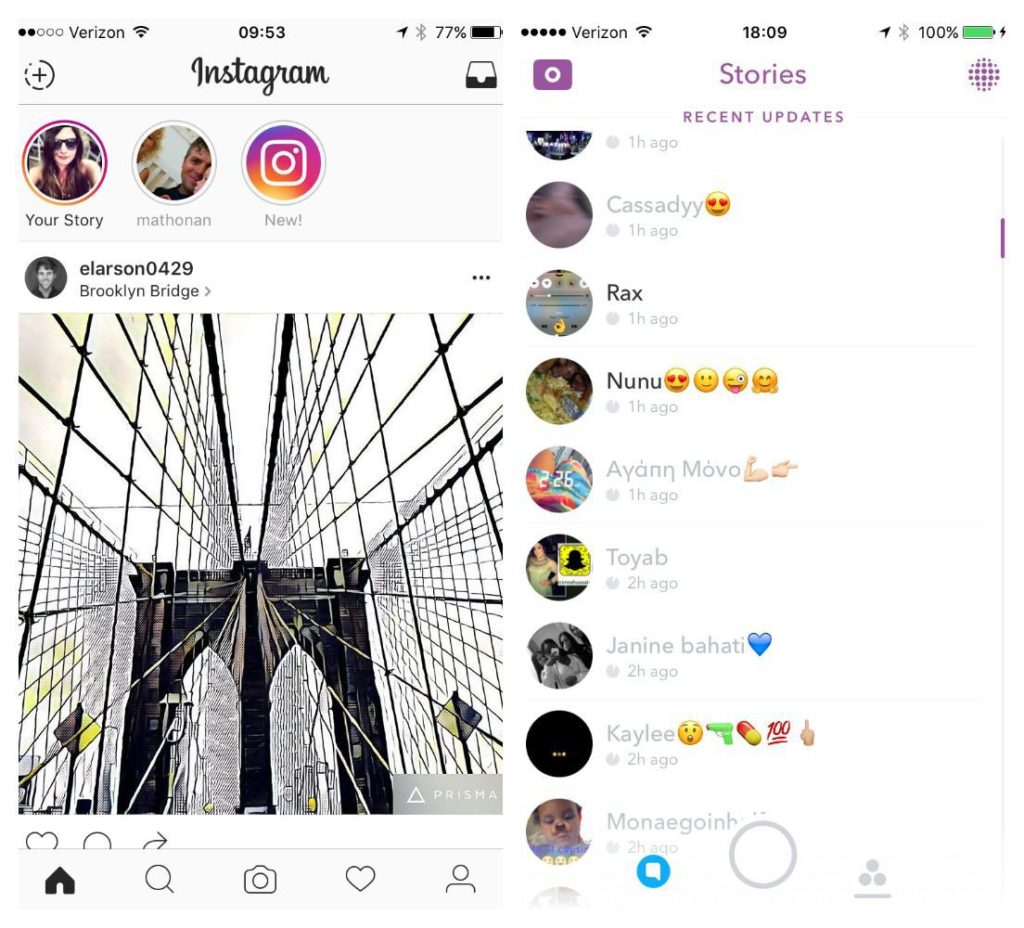 And while Instagram is starting to catch up to Snapchat in regards to Millennial appeal, a lot of people think that their development of Stories was actually geared towards older audiences. Many older users find Snapchat difficult to use - the app's not as intuitive as Instagram for posting images, and that has translated to brands. Take a look at this graphic that compares the two options: 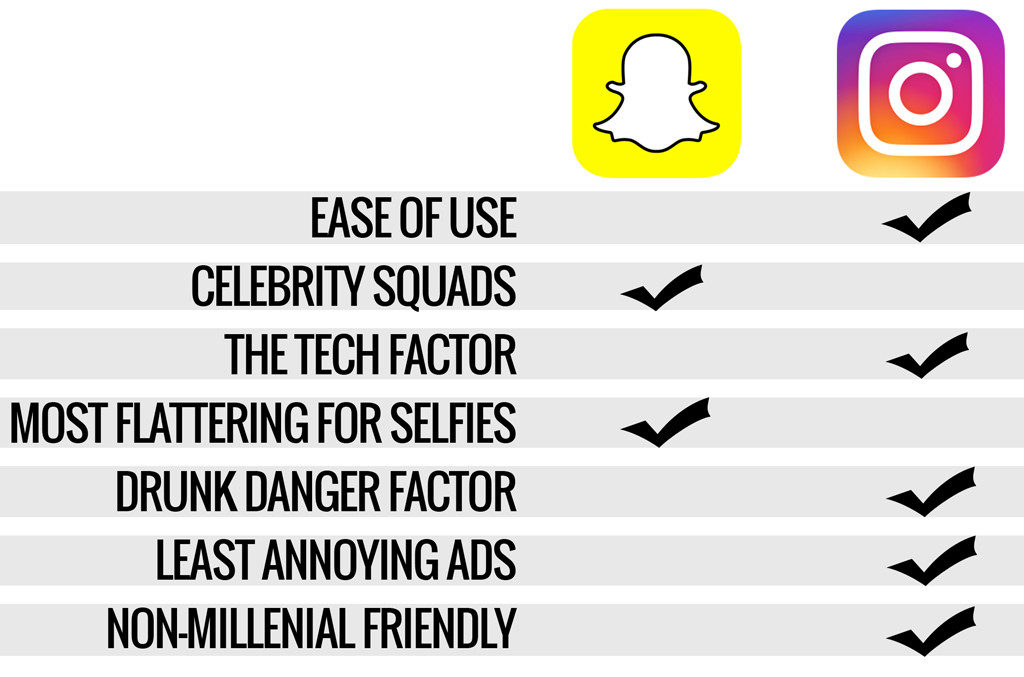 So while your typical 18-year-old prefers Snapchat, a 38-year-old is likely to be much more interested in Instagram.

So the big question is what does this really mean for brands? There's no doubt that there are huge opportunities in both platforms for brands who are willing to go all in on them. However, there are pros and cons to each.

Where Snapchat wins big is through their face-altering Lenses and location-based Geofilters. These feature are different to those on offer on other social platforms, and both are key factor in the apps appeal over other apps. These options not only serve as great interactive marketing options, but they also help to personalize each Snapchat users' experience.

While Snapchat was first to market with their stories feature, in the eyes of many, Instagram has taken a tool that was very good and made it even better. The user interface for Instagram Stories is easier, the way the stories can be shared is better, and even features like the ability to draw on your content is cleaner on Instagram.

The thing that really makes Snapchat feel so different - and the thing that Snap Inc. is doubling down on with the release of Spectacles - is the app's focus on capturing the essence ot the moment. Whereas Instagram's general purpose has been as a platform to share more polished images, Snapchat's ephemeral approach puts emphasis on immediacy over perfection.

But with the addition of Stories - and now live-streaming as well - Instagram may have changed the game by offering users the ability to do both in one place.

In terms of reach, there's no contest. While it may be a bit disconcerting for some that the average number of images shared, per user, on Instagram has been declining year-over-year, the sheer number of users is still huge compared to Snapchat. And that's especially true when it comes to big brands and celebrities.

What Does it Mean for Brands?

While there's no doubt that brands can do great things when it comes to personalization and filters with Snapchat, for many, the fact that they can reach a far greater number of potential customers is far more alluring.

Look at this recent campaign from Nike - the company used an Instagram post (featured below) along with a Story (not shown) that showcased a brand new Michigan football uniform unveiling: 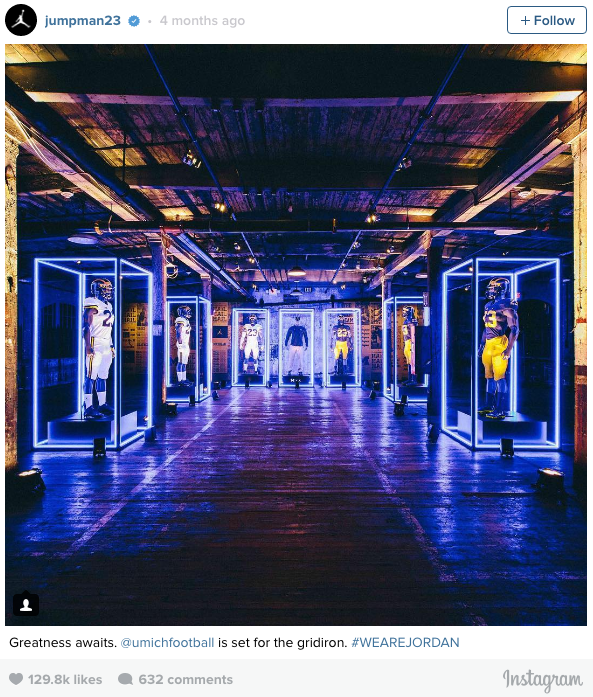 You can see the results listed in this infographic:

This is in large part due to Instagram's big lead in getting to market earlier and the ease of discovering/finding the account by their fans. Snapchat's limited to the mobile app (no desktop version), while discovery options are limited, making it much harder to find brands and follow them in the app.

That's to say this example is definitive - as with all things social media marketing, your decisions on where to spend your time and effort should be dictated by your unique audience. But in general, Instagram's larger audience will likely hold more appeal to most brands.

Right now, it seems that Instagram holds the advantage for brand use. It'll be interesting to see how the platforms continue to evolve and battle for audience attention. Will Instagram look to introduce Geofilter and Lens-type options to become a true Snapchat killer, or will Snapchat's new emphasis on hardware with Spectacles give them the edge?

It'll certainly be interesting to watch - which platform does your brand prefer?